To save Pakistan, we have to let go of the idea of Pakistan 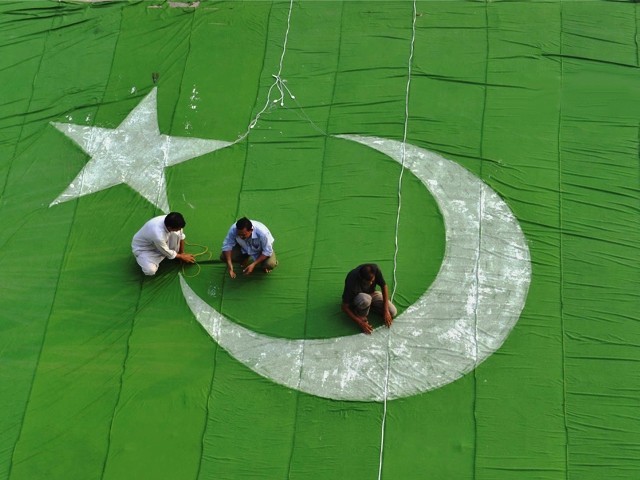 Why is it that non-Muslims only have the white portion, which is completely separate from the rest of the flag? PHOTO: AFP

“We are fighting a fight for Pakistan.”

This is an oft repeated statement from politicians, military personnel, bureaucrats and journalists.

Let me tell you unequivocally, we are losing the fight for Pakistan.

In our attempts to salvage an archaic idea of Pakistan, an idea relegated to the back shelves of the global landscape, we are losing the Pakistan that we have.

If we have any hopes of saving Pakistan, we have to let go of the idea of Pakistan. Neither the sub-continent, nor the world needs a separate homeland for Muslims. We need a country where people can live freely regardless of their creed, caste, religion or political affiliation.

The emergence of the Islamic State of Iraq and Syria (ISIS) has convoluted any concept of an ‘Islamic state’. The global landscape simply has no space for such a transcontinental organisation. The ISIS harkens to the dream of a Muslim Ummah but the state structure prevalent around the world simply does not allow for one.

Every Muslim country around the world has its own vested interests. They make decisions based on those interests rather than any religious association. Upon the creation of Pakistan, leaders and the military establishment of Pakistan extensively wrote to Muslim countries with the idea of forming a Muslim block led by Pakistan, but even 60-years ago, the idea was not broadly welcomed.

As Pakistan learnt in the United Nations, Muslims countries do not necessarily support other Muslim countries, especially if it is against their economic interests to do so. Yet, subsequent governments have tried to rehash the Islamic coalition model. Both, Zulfikar Ali Bhutto’s Organisation of Islamic Countries and Ziaul Haq’s Islamisation debacle did not yield much.

The world politics fundamentally changed post 9/11, yet the narrative in Pakistan failed to change with it. Pakistan’s establishment failed to anticipate the changing landscape. Following Zia’s policies during the Soviet invasion of Afghanistan, we once again formed a precarious partnership with the US. A partnership of deceit, double-cross and unreliable allies, it may be a personal badge of honour for the bureaucrats to successfully outwit a global superpower but the embarrassment caused to the country may be irrevocable.

Pakistan has been called a failed state, a terrorist state, yet our narrative continues to be the same. The jihad discourse promoted effectively to galvanise our countrymen during the wars with India continues to dominate the narrative.

The thing about monsters is that you can create them but you cannot control them; it is the same with ideas. Unfortunately, we not only created monsters, we also provided them with the ideas, giving them the legitimacy to exist. We are now finally fighting the monsters but we are not still fighting the ideas.

I am not bemoaning the Islamic nature of our state, neither am I criticising Pakistan turning into a security state. My criticism is directed towards the culture we have created that acts as the incubator for violent extremism in the country, especially in the name of religion. The culture has been created at times unwittingly but mostly it has been done consciously without realising its full consequences.

And how do we create a culture? A narrative? A history, even?

We tell stories. And at the crux of my argument are the problems I have with the stories we tell.

Stories that are produced, reproduced and perpetuated through our society. Stories combined together which create the idea of Pakistan, an idea that was noble in its conception but needs to be re-examined in the socio-political context of the modern world.

We harken to this mystical idea of ‘Quaid ka Pakistan’, a never-ending debate as to how exactly Quaid-e-Azam wanted Pakistan to be. I too have my own conception of what I feel Quaid wanted Pakistan to be, but ideas are not born in a vacuum. They emerge out of the historical epoch.

Unfortunately, Quaid’s historical epoch is over.

Many of Quaid’s ideas are still relevant and fundamentally important but they should be applied for those reasons rather than the fact that those ideas belonged to Quaid. He was a great man but we are not ordained to follow every single word of any of our forbearers.

Rather than debating whether Quaid wanted an Islamic state or a secular state, we should invest our energies in researching which one of the two would be best suited for the country, and which is the preferred model for most Pakistanis alive today. As Pakistanis, we have more stakes in the future of Pakistan than the ones we have lost to the passage of time.

It is a futile exercise to repackage all the old ideas as Naya Pakistan; if we are to build a Naya Pakistan, we need to redefine our history. I would go to the extent of saying that we need to correct our history. As KK Aziz has exposed in his magnificent book Murder of History, our Pakistan Studies book might as well belong in the fiction section.

When you have stories glorifying Ilmuddin, a man revered by Quaid-e-Azam and Allama Iqbal for killing an alleged blasphemer, then you should not be surprised to find that Mumtaz Qadri is a national hero.

Our stories make us who we are.

The story of Ilmuddin defines who we see as our heroes, and if Ilmuddin was a hero, then so was Qadri. And the retelling of these stories in this light will ensure our future will see many more such heroes.

Both Islamic Studies and Pakistan Studies curriculums in Pakistan heavily highlight the wars and the violence. The glorification of jihad and shahadat (martyrdom) in both ensures generations are bred into that culture at a young age. It is important for a security state, especially a state under threat for an antagonistic neighbour, to cultivate such a culture but without any resemblance of the writ of state such a culture is allowed to run amok.

The culture of violence perpetuated by our education is easily rerouted to fit the narrative of militant terrorist organisations. The use of the same symbols and ideas make the people of Pakistan the idle recruits for these organisations. It is no coincidence that Pakistanis worldwide flock to join every cause masking itself as jihad. We grow up idolising jihad, whether it is against non-Muslims or India.

The trauma of partition

The very existence of Pakistan is defined in terms of the violence of partition. As a nation, we have become apathetic to violence because we grow up reading about millions of death before even lunch time. At home, our television informs of us of hundreds more.

It is important for people to know their history but the politics of language heavily pollute the narrative of language. The death of Muslims during partition is heavily highlighted whereas Muslims who committed killings of non-Muslims is glorified.

In my own research in Lahore, I met people who were extremely proud of the number of people killed by their family members during partition. During and post-partition, people in both India and Pakistan enjoyed impunity to commit mass violence against who they perceived to be the ‘other’. Unfortunately, these violent crimes have never been addressed hence they continue to repeat themselves in Bangladesh, Kashmir, and Balochistan.

Any movement for self-determination in the country is tinted with our constructed memories of the partition. The glorification of both the martyrs and the killers of non-Muslims in the partition narrative ensure Pakistanis are ever ready to take up violence to protect what they perceive Pakistan to be. And this is where the problem is.

The idea of Pakistan, created through our stories, is a group of people using violent means against the state to protect their idea. The moment we were successful in creating a state, the idea should have been addressed and redefined but we continue to tell the same stories, and thus create a culture where people feel it is their duty to take up violent arms against the state to protect their ideas.

The hammering of the idea of unity further amplifies the problem by the perception that a multiplicity of ideas is against the fundamental virtue of Pakistan. The matter is only made worse for minorities and non-Muslims. And every single story that we tell within this paradigm, only perpetuates the core problem. Even if it is something as coincidental as our flag, our flag is basically a piece of art. An artist’s rendition of the idea of Pakistan; an aesthetic choice rather than the objective definition of our country. However, the strict demarcation of the flag between the non-Muslims and Muslims is highly problematic.

Why is it that non-Muslims only have the white portion, which is completely separate from the rest of the flag?

In isolation, these things may mean nothing but collectively, they all add up to form a narrative that we have all subconsciously internalised. We take these things as given but we are surprised when the inevitable consequences of perpetuating such a culture play out.

If we do not forego our fascination with our past, we will lose our future.

If we do not let go of all our individual ideas of how Pakistan should be, and continue to fight against each other for our piece of land, then there will be no Pakistan left to fight for.