Travelling through Pakistan with my (fake) husband 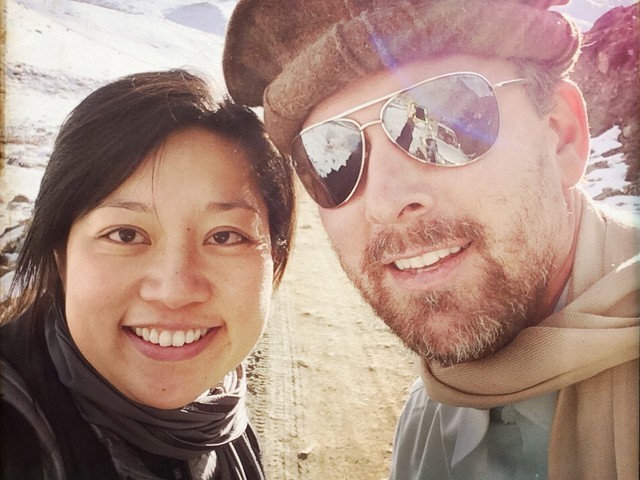 Matt and I at Shandura Pass. PHOTO: CHARLIE GROSSO

I am travelling to Pakistan with a stranger I met on a layover in Hong Kong. Within minutes of meeting each other, we knew we could travel together. We hatched a plan over lukewarm Tiger Beer while sitting on smurf-sized chairs in Hanoi. Out of respect for Islamic values, and as precaution, we decided to pretend to be husband and wife from elsewhere, anywhere but America.

We rendezvoused in Guangzhou and entered Pakistan from Western China down the Karakoram Highway. As I stood at the airport waiting, I thought,

I wondered for the briefest moment if I would recognise this man I had met on a layover in Hong Kong four-months ago. I didn’t know anything about him and I was about to head deep into Pakistan with this stranger. I slowed my pace and looked at each sleepy-eyed passenger carefully. He was not at the gate. I turned around and saw a scruffy, tall, white man in a tan t-shirt tentatively waving at me from a corner.

On our flight to Kashgar, we worked out our cover story. He would be an environmental science schoolteacher from Latvia. I was to be Turkmen, Asian enough but not necessarily Chinese, skirting the political tension between China and Pakistan. This new me is a secretary for Doctors without Borders, not a journalist. My “husband”, Matt, and I met in Timbuktu five-years-ago. We don’t have any children and we live in Riga, Latvia. It was the perfect cover, carefully skirting all possible ideological and political land mines.

We travelled fast and never stayed anywhere for too long. Matt was concerned about security, with kidnappings and ransom at the top of the list. The lies and subterfuge turned us into characters in a spy thriller. We exited China through Tashkurgan, the last town in Xin’jin, and didn’t get stamped into Pakistan until Sost, some 120-miles later. We were country-less outlaws on an old Chinese sleeper bus crossing the Khunjerab Pass (15,397 feet) with a curious assemble of Pakistani and Chinese men.

In Sost, the first town we entered in Pakistan, while I arranged for further transport and exchanged money, a man came over, tapped Matt on the shoulder and asked him to follow. Ten minutes later, Matt came back and told me that the man was Pakistani intelligence and he wanted to know if we were CIA. We high-tailed it out of there before the real spy had any more questions for us.

We never got to tell our perfect cover story. Instead, the story we told changed as our journey progressed. We were Canadians, unless we had to hand over our passports for security checkpoints or hotel registrations. Sometimes we lived in British Columbia (when I headed up the narrative), sometimes we lived in Ontario or Thunder Bay (when he told the story). We were always teachers, but taught unspecified levels and subject matters. At one point, we were unemployed while at another, we were on sabbatical. Most of the time, the curious Pakistanis were less concerned with what I did for a living and more interested in Matt’s fictitious job – after all, he is the man.

Even though we said we are married, the reality of our single selves would flash through subliminally like a bright neon-sign telegraphing the lack of intimacy between us. The good Pakistanis would ask,

One of us would reply,

“Yes,” and point at the other.

The inquiring Pakistani would suffer an awkward pause of disbelief. The subtleties of couple-hood are hard to fake; we stood a little too far away from each other, and he would often hit me on the shoulder as if I was his college buddy. Our factitious marriage eventually spawned a fake child, a three-year-old boy named Marco (after Marco Polo of course). Being an American had become a liability; we told little white lies – married, Canadians, or more precisely, not American, to protect ourselves from anti-American sentiments. We meant no ill will in our deceit.

We quickly made our way through the providence of Gilgit–Baltistan, the land of 8,000 peaks, spending only a night in each town. We hired a driver in Gilgit to take us across the Shandur Pass (12,139 feet) into Chitral, aiming for the remote Kalash Valleys, less than a hundred kilometres from the Afghanistan boarder. The remote Kalash tribe was the centrepiece of this journey. Matt has a keen interest in remote native cultures and I wanted to do a story on them. I love the high altitude peaks and crystal blue glacial lakes along the Shandur Pass.

Crossing Attabad Lake, Pakistan. Since the landslide in 2010, the only way to travel through Gilgit-Batistan Region is to cross Attabad Lake by boat. Photo: Charlie Grosso

Pakistan truly is an incredible country. These mountains are glorious. Matt got out of the car, took a deep inhale of the freezing air, with his love for these peaks vividly visible right there in his smile. I worried about his presence interfering with my work since I’m used to travelling and working alone, but it never did.

My contact and the subject of my Kalash story arranged for a car to take us to Islamabad. The fastest route was through the Swat Valley, skirting just east of Peshawar. The private transport came with armed police escorts we assumed to be mandatory for foreign nationals. The driver drove at break-neck speed, closely following the police escorts, not stopping or slowing for school children or goats. We were informed that this procedure – travelling with armed men and driving on high speed – was all very necessary. We had become Bonnie and Clyde.

At night, when we would be alone, we no longer needed to pretend that we are married. We would go over the day’s events and the logistics of what was next. We talked about where we each wanted to go next and where might be a good place to tackle together. Yemen, Afghanistan, Sierra Leone, South Sudan – I was hungry for the next story and he was compelled by intense personal curiosity.

Our interests dovetailed one another perfectly. We would drift into our personal romantic lives once we had finally exhausted conversations on what the world has to offer. He would tell me about his long-term, serious girlfriend back in San Diego, and I would entertain him with my ridiculous Sex in the City style stories of dating in New York City, made more difficult by constant travel and work.

“You will find someone, someone who loves the road as much as you,” he mumbles just before he drifts off to sleep.

Our lies held up until we met Imran Khan, Babar Khan, and their entire extended family – a curve ball we could not have anticipated. Having heard through the grapevine of brothers, cousins, and neighbours in the tiny town of Uch Sharif that two foreigners were trying to get to a random corner of Punjab, Imran showed up at the bus depot offering assistance. He said he would take us to Darawar Fort as we wanted to camp under the stars near the old fort there, a change of pace from the intensity of being in the shadow of the Taliban, so close to the Afghanistan border. But there was no easy way to get there. Imran could not understand the appeal of camping.

“Why would you want to sleep outside? I like to sleep inside my house with my wife,” Imran says in disbelief.

Imran kept on trying to talk us out of the camping and we kept on telling him that it is what we would like to do. It took a while for him to get on board with our plan.

Then he started calling everyone he knew.

“It is not safe for you to sleep outside. You will need protection,” Imran insisted.

Matt and I looked at each other and decided not to ask too many questions, including the obvious – protection from what? Not too long after, Imran’s other cousin, Babar, joined us, bringing a parcel of food he picked up from Imran’s wife and a blanket. When we arrived at the fort, another friend of Imran’s was there waiting. Unintentionally, we had dragged three strangers into our desert camping plan, who claimed to protect us from the jinns (evil spirits). In a moment of fantasy, it occurred to me that Imran could be a spy, a real one – except his smile and exuberance made that an unlikely scenario.

A simple ride turned into two days of adventure, ending at Imran’s house with his extended family. By then, we were so far into our “married” lies that there was no way out. Spending hours in the kitchen with grandmothers, aunties, sisters and cousins, I prayed silently they didn’t ask to see photos of baby Marco.

“Where is your boy now?” They asked.

I reached for the simplest answer.

“We want our kid to be very independent,” I reply.

They must have thought us to be irresponsible parents.

Matt deflected all the questions he could not answer with sports. He played cricket on the roof with the men, while I sat in the kitchen with the sisters, trying hard to avoid more white lies and being unsuccessful,

Our deceit haunted us long after we left. Imran and his family wouldn’t have cared whether we were Americans or Martians. The human-to-human connections transcend the implications of citizenship and any precautions a journalist and a traveller took. Their hospitality and generosity touched us deeply. You don’t lie to friends, but there was no way we could’ve known.

A version of this story originally appeared on Yahoo Travel.

Photographer, writer, brand consultant, world traveler, art gallery director who drove across the world in a tiny car. She tweets @charliegrosso (twitter.com/charliegrosso) and her work is visible at www.charliegrosso.com/