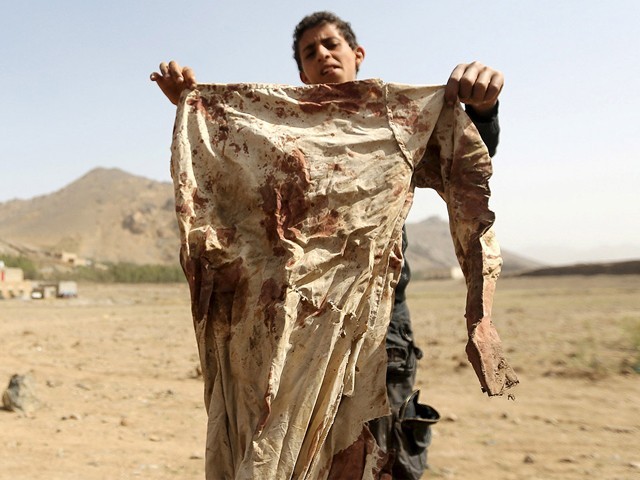 A boy holds a blood-stained garment at the site of an air strike on a house, in Bait Rejal village, west of Yemen's capital Sanaa, on April 7, 2015. PHOTO: REUTERS

The unprecedented Saudi onslaught against the Houthi rebels in Yemen has taken many by surprise. As speculation grows over further escalation in the region, so does uncertainty regarding the nature of Saudi’s intervention in the conflict.

While a broader Middle Eastern conflict marred by bitter tribal rivalries, petty grievances and a never ending quest for democracy pans out in the coming days, here’s a quick look at four things that the Saudi airstrikes in Yemen help put in perspective.

Nothing brings the Arabs closer than Iran

Arab unity is a utopian idea, which despite being well-founded in literature has yet to materialise. On rare occasions, this idea has threatened to transpire but only to fall on its own weight and become a mockery unto itself (Six Day War of 1967). As a consequence, western intervention in countries like Iraq, Libya and Syria seems to only evoke a sense of disgust; a sense that is only multiplied when the aggressor is Israel and the victims are innocent Palestinians.

Surprisingly however, no country has the power to bridge bitter tribal and national rivalries to give a superficial sense of unity like Iran. The paranoia revolving around the Ayatollahs and their supposed threat to Arabisation of Islam seems to be the only cause worthy of bringing some Arabs on the same table – a job that has been made easier due to Iran’s constant meddling in the region.

The Sunni-Shia divide is real

The Sunni-Shia divide is an idea that has sometimes been overplayed in the political history of the Middle East. However, with the collapse of the Shia Iraqi government and the rise of the self-proclaimed Islamic State (IS) formed by hard-line Sunni militants followed by Iranian backed Shia militias effectively toppling the Yemeni government, the genie seems to finally be coming out of the bottle. The divide is perhaps so real that it has the capacity of turning local political disputes like the one in Yemen into regional sectarian conflicts.

The uncompromising Saudi support for the besieged Yemeni prime minister and the consequent intervention in the neighbouring country shows the growing fear of an increased Shia presence in the Arabian Peninsula. Perhaps nothing sums up this divide better than the readiness with which Sunni countries have joined the Saudi-led coalition to fight off the Houthi rebels in Yemen.

Islamic clergy’s silence is not a coincidence

Aid agencies estimate that over 540 people have been killed in Yemen since the Saudi airstrikes in the country began. One controversial airstrike on a refugee camp alone is said to have killed dozens including women and children.

Although the Islamic clergy is generally the first group to go up in unison against military aggression on Muslim lands such as ones in Gaza, Iraq, Syria, Libya and Afghanistan, yet there seems to little to no outcry this time around for Yemen’s civilians living under the constant threat of airstrikes. The silence of these ‘scholars’ is disappointing at best but does not warrant a surprise as even the more moderate Islamic scholars look up to Saudi Arabia as a land of spiritual solace. Even moderate ‘scholars’ based out of the West have fallen short of outright condemning Saudi aggression leaving little to the imagination about the misplaced priorities and fiery khutbas.

The complex geo-political conflicts ravaging across the landscapes of the Arab world are often hard to describe in a few sentences. It is perhaps best to sum up the situation in many of the Arab countries with an easily comprehensible, over used clichéd word: Chaos.

The Arab Spring brought with it the scent of a long awaited cool breeze in a region marred by totalitarianism. For a while, that breeze blew steadily fruiting hope and ambition. However, after the clouds of the spring rain had emptied themselves, a cold, harsh winter seemed to have cast a gloom over the land. Crooked and twisted in their ways and dealings, the despots had found ways of manipulation and exploitation to glue divergent ethnic and socio-political groups to give a superficial sense of stability.

With the Arab Spring and the consequent decentralisation of authoritative power, many of the countries such as Syria, Libya, Egypt and now Yemen seem to have fallen victims to vicious internal conflicts. With over three million Syrian refugees and already over a hundred thousand displaced Yemenis, the longing for a warm embracing summer grows stronger by the day.

Although these Saudi airstrikes in Yemen help put many things in perspective, it’s also important not to forget the consequences of such unilateral action. Not only is this aerial bombardment against international charter but it also puts Yemen’s civilian population in harm’s way. Bombing a country with the second highest rate of gun ownership in the world is recipe for disaster.

Pakistan’s recent decision not to join the Saudi-led attack on Yemen has received serious backlash and is being panned as “dangerous and unexpected” from their Saudi counterpart. One can hope that instead of playing favourites, countries like Pakistan can actually play a constructive role in restoring peace and stability to the region. So for once, Pakistan seems to be on the right track, unselfish if I may even say so.