For love of the printed word 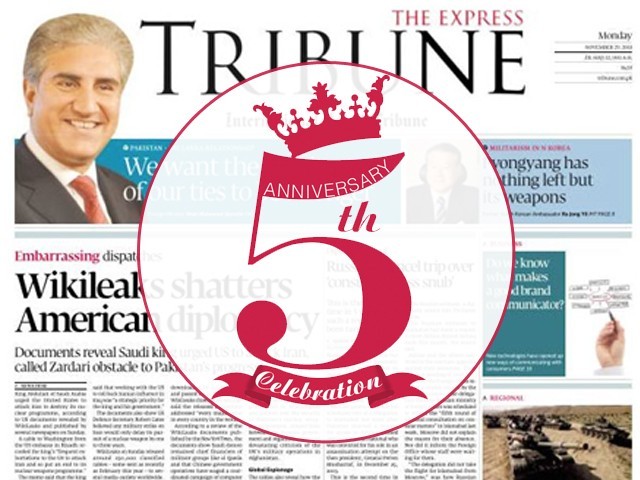 In the summer of 2010, a colleague brought a new newspaper to work. The workplace had a number of publications coming in but this one made an immediate impact. The type face was bold, the pictures vibrant with colour and the stories were fresh. It was sassy without being saucy and with enough hard hitting content to make me read it cover to cover in one go. The newspaper was The Express Tribune (ET) and fast becoming the young reader’s choice.

The reasons were obvious. Compared to the staid fare ladled out by competing newspapers, The Express Tribune was talking about issues prevalent but never discussed: alcoholism, prostitution, homosexuality, religious extremism and, of course, terrorism. While the op-ed pages of other newspapers had octogenarians dawdling on in colonial English about soporific topics, ET was giving space to the next generation of writers and journalists. The writing ranged from the good to the ordinary (who can forget or even forgive the “10 reasons why I love kittens” type blogs or the constant coverage of Veena Malik and her ilk?), but there was a virginal approach that made one overlook the sophomoric features for the meaty ones.

The newspaper wasn’t shy of naming names and taking stances. No inverted commas adorned its headlines, a tactic other English dailies used and still do which imply that this is what has been heard, thus avoiding any direct link or even ownership with the story. ET’s naming and shaming policy was practically revolutionary in an industry which thrives on cunning obfuscation and exquisite ambiguity. Then there was the added benefit of getting access to the International Herald Times, something that I had only gotten access to through my university and had been deprived of since graduation.

Soon ET was taking on the big boys and they were reacting to the upstart. Black and white pictures gave way to coloured images, mast heads were altered along curvier and more pleasing lines, headlines spruced up, graphics introduced. Suddenly new writers started finding a home in what hitherto had been sacrosanct ground, accessible only to a particular elite. The change was even more visible in the online version. ET had tapped into the younger audience, one more attuned to reading through the websites than the print version. Keeping in mind the demographics of the country – some 60% of Pakistan’s population is under 30 – this was a sound strategy. Soon others brushed up their online presence and the result was an overall improvement on the presentation side of English print journalism in Pakistan.

As an aspiring writer, I was excited. Here was a publication that was not going to shred pieces because they had too much flair or flirted with controversy. Editing would be done to improve pieces and not to suck their souls. Humour was encouraged and so was flamboyance as long as it kept with the intent of the piece. And best of all, the forces causing havoc in the country would not be mollycoddled.

It seemed like the revolution would continue but then disaster struck. On August 16th, 2013 I read a tweet by a staff member that there is an attack on the Karachi offices of the paper that injured two guards. Then a few months later on December 2nd, grenades were thrown on ET’s building in Karachi. The third attack took place on January 17th, 2014 and resulted in the deaths of three ET employees. Death, a looming shadow over truth, had come to the door.

The paper’s boldness and courage had marked it for the terrorists who took ownership of the attacks. There were some who felt this was on the cards, detractors who disliked the liberal line the paper had taken and wanted to see it operate like the demure maids its sister publications were.

Sadly, the result of the attacks was in line with the intent of attacks. Pushed to the wall, ET made policy changes about coverage and opinion pages. Extremist parties and militant groups would not be antagonised and if attacks were covered, they would be pared down. The New York Times story on Osama bin Laden’s presence in Pakistan censored completely, an empty space scarring the paper where the words would have been. There would also be a more conservative approach in the lifestyle sections; Veena Malik was given a hiatus.

I was aggrieved but there was nothing to be done. Journalism is important, but is it more important than the lives and security of journalists? No. But with its wings clipped the publication couldn’t carry on in the same verve. However, even after that it can throw the gauntlet of being the voice of Pakistan’s liberal left. The change it brought in the industry could not be denied.

The old guard is no more; new writers are contributing in op-eds of senior papers and competition has made Pakistani journalism vastly better than it was a decade back. I still look to ET for hard hitting stories and it’s still my choice of paper for writing on difficult areas.

As ET celebrates its fifth year, I can only wish it well and hope that one day we could have the old one back, the one that arrested my attention all those years back and made a starchy business graduate reach to the keyboard and pen a piece on his favourite topic, the Karachi summer.