Will the Judicial Commission be the answer to Imran Khan’s prayers? 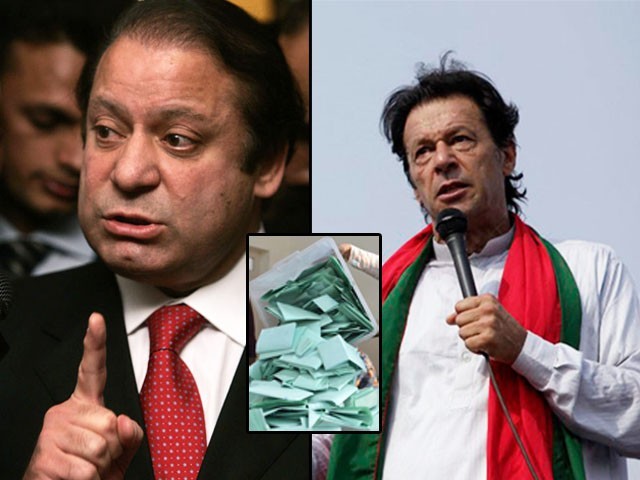 Although it may seem like a victory for PTI, it may turn out to be anything but that.

With the formation of a Judicial Commission (JC), the ball is now in the Supreme Court’s court. Pakistan Tehreek-e-Insaf (PTI) and Pakistan Muslim League-Nawaz (PML-N) had reached an agreement over PTI’s longstanding demand of establishing a JC to probe into rigging allegations pertaining to general elections held in 2013.

Although it may seem like a victory for PTI, it may turn out to be anything but that. The news of PML-N giving in and agreeing to form a commission as per PTI’s demands implies that the see-saw has tilted Imran Khan’s way. But a thorough perusal of the Memorandum of Understanding (MoU) signed between the parties, and the consequent General Elections 2013 Inquiry Commission Ordinance 2015, may depict a different picture where PML-N weighs heavier.

Despite Imran’s stern warning of re-resorting to protests in case PML-N makes any alterations in the MoU, there were alterations nevertheless, but no protests however.

In the original draft, it was agreed that with the establishment of a special investigation team by the JC, in pursuance of section 6(2) of the ordinance, the appointment of Director General (DG) Federal Investigation Agency (FIA) will be made afresh in consultation with PTI, along with simultaneous appointments for the posts of Chairman NADRA and Secretary Election Commission.

In its final shape, the MoU, however, contains clauses whereby PTI has surrendered its stance on the positions of Chairman NADRA and the Secretary Election Commission of Pakistan (ECP) and accepted their appointments as valid.

So the two main relevant institutions responsible for providing records to the JC will continue to be run by appointees of the PML-N government, who were earlier objected by PTI.

Then there is the absence, or semi presence, of any time limit for concluding the inquiry. Contrary to PTI’s earlier claims of making the commission bound to complete and conclude its inquiry within 45 days, the proposed ordinance in Section 7 contains the following words:

“…as expeditiously as possible and, preferably, within 45 days of its first meeting.”

Laws are supposed to be clear and unambiguous. A stipulation of any agreement, an act or ordinance is either binding on a party, or a person, or not binding. There is no such thing as semi-binding. The JC formed in consequence of the ordinance is, therefore, not bound to submit its final report within 45 days. This allows for delays and presents an opportunity for a deadlock.

The first delay could have been in the promulgation of the ordinance, as the MoU did not contain any time frame for the said promulgation. That bridge, it seems, has been crossed.

Next, there is the probability of the ordinance being challenged in courts, as mentioned in Article 225 of the Constitution, which bars all courts and judicial forums, except election tribunals, from adjudicating upon election disputes. Since a JC has now been formed by the chief justice of Pakistan, any on-going proceedings in subordinate courts will be dismissed.

There still is a probability of delays and deadlocks even after the promulgation of the ordinance and the subsequent formation of a JC.

If the commission decides to form a special investigation team in pursuance of Section 6(2) of the ordinance, then the matter of DG FIA’s appointment ensues therefrom. In light of the MoU, the said appointment is to be made by the government after due consultation with PTI.

The time required for ‘due consultation’ and consensus between PTI and PML-N can be anything ranging from two weeks to two years, judging by past record. This presents a very potent scenario for a deadlock.

The JC is bound to seek the record of elections and voters from ECP and NADRA. Both of these institutions are expected to take their time in providing their records, since the JC will be inquiring into the entire general elections all over Pakistan and not just a single constituency.

A delay in providing records may be attributed to alleged directions from the sitting government, which may result in another battle between PML-N and PTI. In the worst case scenario, such a battle may even trigger withdrawal of the ordinance. As per Article 89(2)(b), it is within the president’s power to withdraw an ordinance at any time, if so advised by the prime minister.

Even if all of the above apprehensions and probabilities do not materialise, there is still the question of what it will take for the JC to give PTI what it wants – dissolution of the assemblies and fresh elections?

The scope of inquiry for the JC as contained in Section 3 of the ordinance is:

“The Commission shall enquire into and determine whether or not:
(a) the 2013 GE were organised and conducted impartially, honestly, fairly, justly and in accordance with law; and

(b) the 2013 GE were manipulated or influenced pursuant to a systematic effort or by design by anyone; and

(c) the results of the 2013 GE, on an overall basis, are a true and fair reflection of the mandate given by the electorate.”

The words ‘on an overall basis’ are very significant. The very same words have also been added to clause 4(1) of the MoU, where it says that the national and provincial assemblies will be dissolved and fresh elections will be held if the JC finds that the GE 2013 do not reflect the true mandate of the electorate on an overall basis.

To conclude that the elections were rigged on an overall basis, the JC will have to ascertain in its final report that there was planned rigging in the entire country or in a majority of the constituencies. The mere fact that there were irregularities in the elections on a large scale, attributable to the ECP or NADRA, will not suffice.

If the commission finds any one or two, if not all, of the allegations within its scope of inquiry to be true, the words ‘on an overall basis’ would then be subject to interpretation. From the text of the MoU, it seems the prime minister will dissolve the assembly only if all the allegations are found true.

It is not clear whether PTI has let the see-saw tilt to its own accord, or if a third party has persuaded them to do so. It is highly improbable that PTI has overlooked all these aspects of the MoU and the ordinance, along with changes made in the final draft.

The fact that this MoU was signed on the April 1st may also be of some significance.