Gang raped in Swabi for being a transgender person 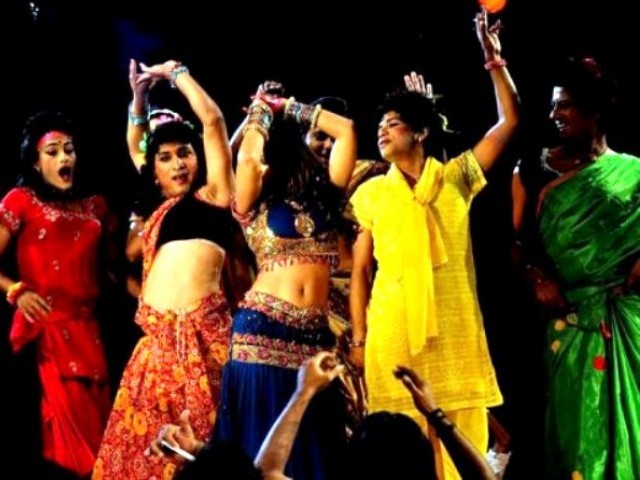 From K-P to Karachi, the transgender community demands money for the only job they are allowed to do, music and dance, and even then they are often exploited. PHOTO: AFP

The transgender community of a country like Pakistan – a place ranked as one of the most dangerous countries in the world according to a report by the Minority Rights Group International (MRG) – live very miserable lives because crimes such as harassment, torture, violence, bullying and other hate crimes become everyday ordeals for them.

Just yesterday, in a heart rending incident, a transgender was gang-raped while two people were shot dead in Swabi, a district of Khyber-Pakhtunkhwa (K-P). They were a group of transgenders going home after performing a music and dance show at a wedding. On their way home, some armed men stopped them and tried to abduct them. As the group refused, the men opened fire which resulted in the death of one transgender and the drummer of their group. The men then kidnapped one of the transgenders and gang-raped him.

While the incident was reported by the media, isn’t it ironic that none of the NGOs, who claim to be supporters of human rights and more, raised a voice to condemn this heinous crime against a community known as the ‘third gender’ in Pakistan. Perhaps it’s because these organisations do not consider marginalised communities as human beings.

This is not the first time a transgender person has been raped and it certainly will not be the last. Transgender persons in Pakistan will continue to suffer at the hands of their countrymen. Traditionally, known for their music and dance skills performed at wedding ceremonies, parties and other functions. At parties, many transgender people are sexually assaulted by drunken men and upon resistance, they are threatened and tortured. From K-P to Karachi, the transgender community demands money for the only job they are allowed to do, music and dance, and even then they are often exploited.

Apart from being victims of lusty men, the third gender community in Pakistan are also victimised by police officials – officials who are meant to protect you from harm, people you go to for help, the guardians of our lives. The police are even reluctant to register their First Information Reports (FIRs). However, in yesterday’s incident, the police managed to track down and arrest the culprits involved in the kidnapping and murder. This just goes to show that the police are capable of helping the transgender community when they want to. Question being, why don’t they stand up for the transgender community on regular basis?

In a country that gave this community a right to their identity just a couple of years ago, there is no one to hear them out. Their tears go unnoticed, their pleas for justice fall on deaf ears and their misery is forever ignored. They have been treated as nothing more than a ‘laughing stock’ for our society, a source of amusement and oddity. A mere object, not human.

Deprived of rights guaranteed to every citizen by the Constitution of Pakistan, the transgender community continues to face oppression and neglect. If the society and the government will not give them their due place, perhaps the responsibility lies on the media to give them the voice they deserve. Bring attention to their issues, highlight the hate crimes against them, broadcast their protests, start awareness campaigns, change the attitude of the society — the media can become their only hope to salvation. But will it?

The author is a full-time journalist based in Peshawar, Pakistan. She is associated with Express News as a reporter. She also contributes to The Express Tribune and The Oslo Times. She tweet @mahwishqayyum (twitter.com/MahwishQayyum)