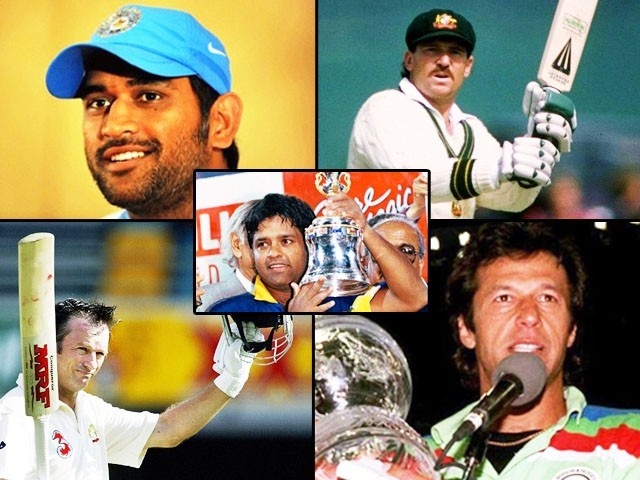 Nevertheless, captains have been very influential in winning their sides the world cup PHOTO: AFP

Michael Clarke made it to the list of illustrious players who captained their team to a World Cup triumph. There is no denying that captains in cricket are very significant, because they make all the strategies and they have to manoeuvre their men like pieces on a chessboard.

Nevertheless, captains have been very influential in winning World Cup tournaments for their sides. Let’s look at the five best captains in cricket history who have helped their national teams win the grand trophy. These captains are determined on the basis of their leadership ability, the resources they possessed, and the legacy they left behind.

Imran Khan was a very aggressive and intelligent captain who led from the front. He is, without a doubt, Pakistan’s best captain. He took an average team and transformed them into world champions.

Under Imran’s captaincy, Pakistan recorded their first ever Test series win against India, England and a drawn series against West Indies. During the 1987 World Cup, the Pakistani cricket team under Imran was a favourite amongst the audience, but they eventually lost to the actual champions, Australia, in the semi-finals.

After the 1987 World Cup, Imran announced his retirement from cricket. But in 1988, due to popular demand, he was asked to come back and lead the Pakistani side again. Finally, at the end of his career in 1992, he was able to fulfil his lifelong dream and won Pakistan it’s only World cup.

A campaign that started poorly and was nearly at the brink of elimination, made a comeback due to Imran’s leadership and belief and Pakistan won the World Cup, which was a perfect farewell to him.

Presently, Dhoni is the best captain in modern day cricket. Dhoni has been responsible for changing the face of Indian cricket. He started playing sports as a goal-keeper for his school football team but later became a wicket keeper-cum-batsman for his local team, and finally, he transitioned to become India’s greatest captain.

Furthermore, under Dhoni’s captaincy, the Indian team has won all major trophies – which include the 2007 ICC T20 World Cup and the 2011 ICC World Cup. His defiance and brilliant leadership skills led India to their second World Cup victory, and in the final, Dhoni played a tremendous unbeaten innings and became ‘Man of the Match’.

It was under his captaincy that India climbed to the number one spot in the ICC Test rankings in 2009.

Waugh was a fighter. He never gave up and was responsible for taking the Australian cricket team to unprecedented heights. Waugh was part of two World Cup winning teams, in 1987 and 1999.  As a captain, he transformed the Australian side into one of the best teams in the history of cricket. He shaped the Australian team into a ruthless side, winning a record 16 Tests on the trot.

His greatest achievement was conquering the World Cup in 1999, where the Australians witnessed a poor start to the tournament, losing two out of three matches, which meant that the Aussies had to win seven consecutive matches to win the World Cup – a feat which they managed to achieve brilliantly.

Waugh’s awe-inspiring performance came during the crucial super six-match against South Africa, during which he scored a brilliant unbeaten century to take Australia to the next round, and eventually winning the tournament.

Border was not a natural captain; he took over the Australian team while it was undergoing extremely difficult times, since their best players, such as Greg Chappell, Dennis Lillee and Rod Marsh had left the team.

His initial tenure as a captain was a very disappointing one, but Australia’s surprising victory in the 1987 World Cup proved to be a turning point and heralded the start of a more prosperous time for their side.

Border did not perform much with the bat during the 1987 World Cup, but his tactics throughout the tournament were brilliant while defeating the English team by seven runs in the final. He was responsible for rejuvenating the Australian side into a world class unit.

Ranatunga came to be known as a belligerent and intelligent leader, famous for defending his players at all costs. Before the 1996 World Cup, the Sri Lankan team was considered the underdogs, but Ranatunga inspired them to become world champions. Furthermore, Ranatunga was a very innovative and aggressive captain, and his tactic was to attack in the first 15 overs and make use of the field restrictions.

Therefore, he decided to open with Sanath Jayasuriya and Romesh Kaluwitharana. This decision resulted in completely changing the image of the Sri Lankan cricket team, since they defeated the cricket giants, Australia, in the final, to lift the 1996 World Cup trophy.

While fans have just witnessed an amazing spree of matches during the 2015 ICC World Cup, and have come across some great captains and teams, I felt that it was important to mention these legends and understand that the difference between a good team and a great team is how amazing the captain is. Perhaps the PCB should keep this in mind while choosing Azhar Ali as Pakistan’s captain.