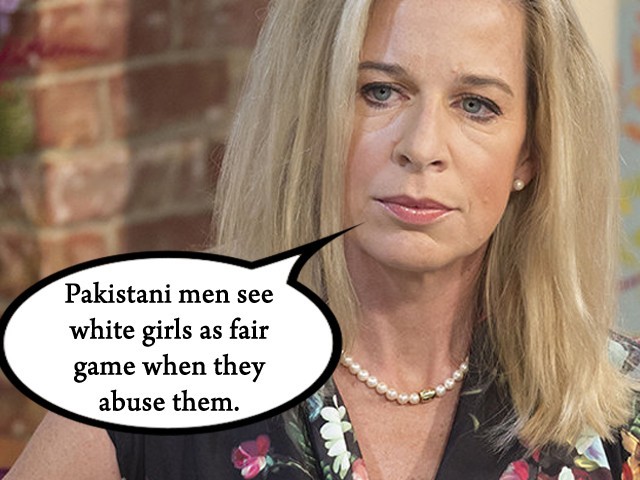 In other news, Katie Hopkins of Britain has been accused of racism. Again.

In addition to making jokes with regards to the Ebola crisis, degrading anti-Ebola volunteers, calling Palestinians “filthy rodents burrowing beneath Israel”, calling for the “bombing campaign” against Palestine to restart, fat-shaming, and labelling obese people unfit for employment, Ms Hopkins has once again landed right where everyone on this planet would have expected her to: in filth.

"I was fat so I got bullied at school". No child. You ate to much and people pointed it out. Own your problems http://t.co/Ma0cyAlVLr

Well, that’s almost like damning her in faint praise, but credit must be given where it is due, and Ms Hopkins is always mindful of what people expect from her, and she really delivers up to the mark.

Of late, the infamous ‘journalist’ has been involved in a flurry of furious tweets with Labour MP Simon Danczuk. Understandable it is that two proclamations from the aforesaid might induce some ill-ease in the worthy reader, but they’re both true: first, that Ms Hopkins is a ‘journalist’ for The Sun, and second, that she has been showing off her journalistic prowess and ethics on Twitter.

Here you go @SimonDanczuk. This is our flag. Try flying it the right way up love People fought and died for this flag pic.twitter.com/sxqaIWKT3F

Here we must also give Mr Danczuk his due credit, and though he tried, really tried, to reason with Hopkins, he couldn’t make her opinion more tolerable. We must also highlight the famous quote here:

“There are two theories on how to argue with self-obsessed, hateful, racist, spineless pseudo-journalists. Neither one works.” – Rumi

But, coming down to the actual offense, which this time involves Pakistani men and a miserably failed attempt to ridicule them. The issue was as minimal as this: Mr Danczuk, who represents Rochdale, attended the Pakistani flag raising ceremony on March 23rd. Have you ever come across a complete stranger (read: a mohallay ki aunty you barely know) going crazy at you for attending a harmless ceremony out of your own will?

Well, Hopkins is definitely that kind of an aunty. Not only did she take prime offense from someone else attending a ceremony, she assumed the position of having the authority to vociferate her boisterous opinion – no matter how worthless. Twitter has definitely become the best depiction of a comb in the hands of a bald man – or in this case, a bald woman.

From calling the raising of the Pakistani flag “inflammatory” and “outrageous” to asking whether Danczuk was friends with the eight Pakistani men convicted for child abuse back in 2012 – though Hopkins went on to put on a show of noisy complaints that could only be rivalled by Fox News’s Judge Jean Pirro. Danczuk, however, had caused more offense than he knew.

Raising a Pakistani flag in Rochdale is not helping community cohesion. it is inflammatory. @SimonDanczuk you & your party disgust me.

What are you playing at @SimonDanczuk? Raising the Pakistani flag in Rochdale? https://t.co/xa8u2RtRVL I'd rather raise a kid called Tyler

First things first, he stated the blatant obvious: that Hopkins could start a fight in an empty room, and second, he put up a picture with two Pakistani men from the ceremony. What was worse was that one of the two Pakistani men had a beard and wore a skull cap! Britain’s advocacy for freedom of expression aside, skull caps and bearded men, Daczuk, seriously? Did you not know the men carried grenades in their pockets and were planning sinister designs to molest white kids in the ceremony? Right under your nose, too!

Hopkins is anything but wrong in being suspicious of these third rate big-nosed, bearded, brown Pakistani men – isn’t that what Mad Eye Moody taught us? Extreme vigilance!

Writing my column today….hmm….@SimonDanczuk are we looking forward to Friday? I'd stick a Pakistani flag on your head and stay in bed

Are these your friends too @SimonDanczuk? Is this why you are raising the Pakistani flag in Rochdale? 77 years inside pic.twitter.com/wcyuPM1JVl

Simon did what any other politician would do when desperate for votes. And raised the Pakistani flag. Upside-down http://t.co/TF2tLAANwL

However, Mad Eye Hopkins did not just stop here. She went on to call Danczuk a fool and highlighted the obvious, that his “Pakistani friends saw young white girls as fair game when they abused them”. Like a stubborn child, not ready to let go of his teddy bear at bedtime, she went on to say that she’d “stick a Pakistani flag on your [Danczuk’s] head and stay in bed”. I would refrain from commenting upon her taste in head gear, though I must venture to say that she has not got the apple of discord wrong altogether.

@SimonDanczuk Your Pakistani friends saw young white girls as fair game when they abused them. Do NOT lecture me on community cohesion fool

Listen @SimonDanczuk – I'll come to Rochdale, raise the British flag and explain why NO ONE messes with our white girls. Sod your PC tripe

Like a wailing, cheeky child, if not given proper attention, racist maggot-pies will soon get bored. Besides, like a wailing child, Hopkins needs something to whine about every now and then – her preoccupations, however, will always remain contemplation and contemplation alone. At most, she will resort to Twitter. We had rather go back to watching Inam Ghar Plus.

Barking dogs seldom bite – what is without remedy should be without regard.