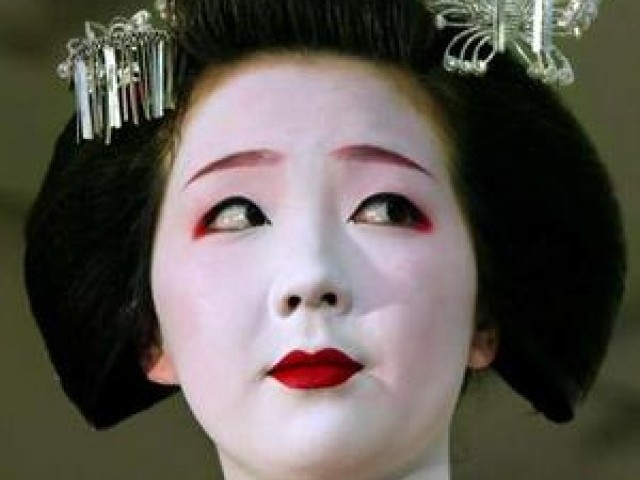 Is this the look you want to aim for on your wedding day?

Why do desi brides so often opt to look like geishas on their big day?

From India to Pakistan to desis settled abroad, we can’t seem to shed the belief that a bride needs to be painted beyond recognition.

I’ve seen make-up artists cake it on by mixing different coloured liquids on what appears to be a painter’s palette and applying it with a thick brush on the bride-to-be, as if she were a blank canvas and not a woman with unique features.

I’ve seen brides throw away small fortunes on hiring a make-up artist and paying for them to commute from one city to another on the day of the ceremony. Small-time make-up artists often operate as if every face is alike. They usually try to emulate the white-washing done by big-timers like Ather Shahzad (never mind that photos at the studio are also heavily photos-shopped after the model’s face has been doused with foundation and caked with powder). Each time a bride pays to be made up, she comes out looking just like everyone else, whether she went to a professional who charges the by the hundred thousand, or a semi-professional who charges by the thousand.

Although very few people can afford to hire the big guns, a large number of women feel obliged to hire someone. Even make-up artists in small towns charge an indecent amount of money for their services, which is why it’s such a shock that women still feel obligated to stick to the norm.

There are some women who really do need the help. Flipping through one make-up artist and beauty salon owner’s “before and after” bridal photoshoot album, I was reminded of how makeup can be miraculous. She had taken women with severe acne scars, women with bushy eyebrows and hairy upper lips, women with different shades of skin, or simply painfully plain-looking women, and transformed them all into the prototypical bride. They all came out having the same white skin, although their eye and lip color varied according to their bridal clothes. It was almost as though they had been transformed into new women. It was something they probably would have never been able to do without the help of a paid professional.

There’s one problem though: they all looked like desi geishas. The problem I have with that is this: on your wedding day, do you want to look like one half of a couple, or do you want to look like a living doll or plaything for the groom? It’s an unsettling, creepy vision to see a bride painted beyond recognition, sitting stoney-faced next to a man who is liberated enough to be allowed to sit in his own skin. He can smile and be comfortable, he doesn’t have to worry that his heavy foundation will crack, or that crying will make him look like a human-raccoon hybrid. As gorgeous as the actress was in Memoirs of a Geisha, even she looked better with the makeup off.

Feminist reservations aside, another problem I have with throwing money away on makeup that lasts for a single day is that it more often than not, it takes away from a woman’s beauty rather than enhancing it, because of the way that it’s done here. Makeup artists have often already been paid before they’ve done their job and usually when it‘s done, the bride has to live with it whether she likes it or not. I’ve seen them do some really garish things-visible lip-liner, purple lip-liner, gold lipstick, visible contouring of the nose to make it appear slimmer, unblended foundation at the neck, forcing eye-shadows and lip-stick to match the dress. Here’s a tip- if a certain color of blush or lipstick is not found in nature, it probably won’t look flattering on your face, especially on the day you’re supposed to look your radiant best.

Make-up is an art

It is an amazing skill to have. The best make-up artists who really know what they’re doing never paint a woman beyond recognition. Nars. One of the main reasons of his success is that his foundations offer great coverage, all the while looking natural, whether your preference is matte or sheer Glow. Tinted moisturisers, such as the ones made by Shiseido, are also hot these days, because they make your skin look naturally flawless and add an ethereal glow.

I can’t say the same for Kryolan’s stick foundation- which was used by the make-up artists during the Miss Universe Pageant in Las Vegas this year. Its normal use is for TV and film artists who need heavier make-up because of stage lights. It’s used by men who dress in drag because it’s thick enough to completely cover their skin. It also happens to be used in many salons and is endorsed by beauty supply stores across Pakistan, because it’s thick enough to make a tan woman white.

A friend of mine had a genius idea for her wedding day, although she was lucky enough to be in America at the time. Instead of spending a ton of money on hiring a make-up artist, she bought a ton of make-up at the mall and had one of the make-up artists there give her a free make-over just before her ceremony, as they do upon the request of all their customers. So instead of having garish make-up for one day, she got to look like a radiant bride and have a lot of good quality make-up for years to come. There’s a lot to be said for a woman who doesn’t buy into conventions because she finds a way to do things better.

I’m not old enough to remember the days when make-up was done by the friends and family of the bride, but as a DIY girl myself, I’d say buy good-quality make-up and invest time on YouTube learning how to use it, instead of paying someone. It may be a risk either way, but if you succeed on your own, you’ll walk away with more than just one good make-up day.