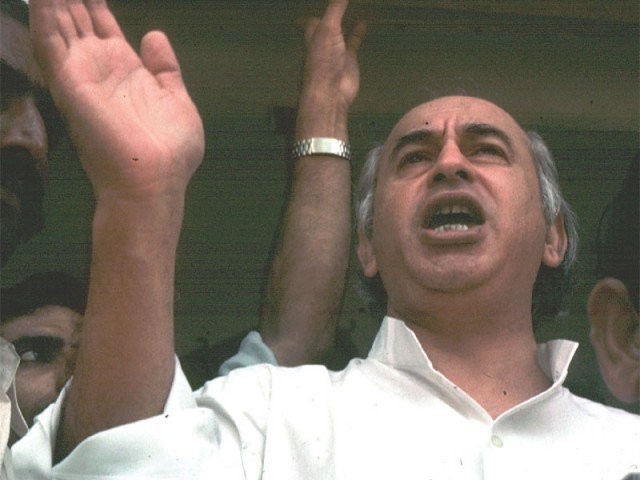 I do not understand why he is always spoken of as a successful leader, when clearly his regime had major detrimental flaws. PHOTO: FILE

It’s April 4th today, which marks Zulfikar Ali Bhutto’s 36th death anniversary in Pakistan. And for many, it is the day their supreme leader, their democratic prime minister, their charismatic upholder of human rights was wrongfully executed by a dictatorial regime.

However, this is not everyone’s view.

No doubt that Bhutto was a force to be reckoned with. He started the culture of street mobilisation (rallies), his passionate speeches made people listen to him and understand democracy – his version of it, anyway – and he gained votes from the two most populated provinces in Pakistan – Sindh and Punjab.

But does Pakistan comprise of just these two provinces?

No, it most definitely not.

So why do we always ignore the fact that the people of Balochistan and NWFP (modern day Khyber-Pakhtunkhwa) were never in favour of Bhutto? Why do we pose him as a national leader when half of his country did not approve of him? And also, why should his death anniversary be observed like this when no other leader is given the same treatment – except for his daughter?

If we take all the glamour and the UN-paper-tearing gimmicks and the dramatic speeches away, what was Bhutto’s legacy anyway?

Leaving aside his grotesque mutilation of the Constitution, which he himself devised, and his utter ignorance of human rights (keeping the Ahmadi issue in mind), there is a lot more to Bhutto’s disastrous political career that one can discuss.

He came to power when he was a martial law administrator, he weakened the country by manipulating Ayub Khan and manoeuvred his way through politics resulting in modern day Bangladesh, he exploited his relationship with Yahya Khan and orchestrated a civil war using him as a pawn, and he weakened the military by sending its soldiers against its own people and discrediting their image.

He weakened the unity of Pakistan’s provinces by favouring Punjab and Sindh and ignoring K-P and Balochistan. His treatment of the Baloch, in the 1970s operation against them, is testimony of his polarised policies. He made sure that Pakistan was not a meritocratic society; that people were treated according to their backgrounds and race rather than their abilities and that jobs were not based on the concept of equal opportunity.

While his policy of nationalisation helped in the distribution of concentrated wealth – taking away the privileges of the 20 or so families who owned 80% of Pakistan’s wealth – it also resulted in the deterioration of key institutions like education, shipping and healthcare. Because there was no investment in the private sector, a lot of industries suffered, resulting in lack of tangible jobs, high poverty rates and a negative balance of trade. Bhutto’s ‘Islamic Socialism’ was no different – while he took away land and other modes of production from different private owners, he showed favouritism by letting his friends keep their property.

Bhutto even experimented with population control, but this too backfired because he could not understand the psyche of his people. He should have gone about it with caution and care, making people understand the purpose and reason of such a campaign. Instead, he lambasted the idea on his people, presented it as an alien concept and hence damaged even future prospects of having a successful birth control campaign.

So no, Bhutto was not the benevolent, all-good leader that the Pakistan Peoples Party and its followers are so hell-bent on portraying. His rigid nature and feudal background could never have allowed him to become a successful leader.

Hence today, as a history major and an educated citizen of Pakistan, I will not observe Bhutto’s death anniversary. A person who has been so destructive to the unity of Pakistan should not be given such treatment. For me, this day is like any other. And there is no reason why other people should make such a fuss about it either.

She is a History major at the University of Karachi, who is specializing in contemporary history and is mainly interested in the study of culture and gender.

Kashmir Day holiday is fine but you have an issue with Holi?

Would surrogacy ever be accepted in Pakistan?