Dear Hamza Ali Abbasi, your diva fits on Facebook have to stop! 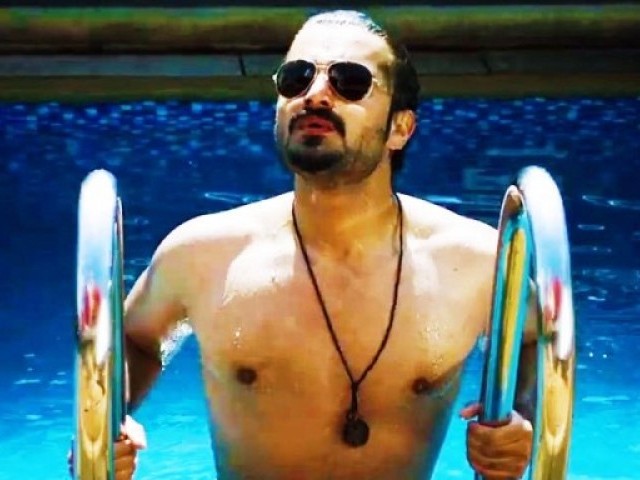 If what these female actors do mortifies you to this existent, why work with them, Mr Abbasi? PHOTO: SCREENSHOT

Hamza Ali Abbasi, of Pyare Afzal fame, is one of the finest actors of our entertainment industry. Or so I thought. Of late, he has ceased to have the same ‘pyare’ charms that he had on his fans some time back.

I, for one, have been extremely disappointed in him.

Recently, he took to social media to express some very strong opinions, or diva fits as I like calling them. At one point, he appreciated Zhalay Sarhadi for not exposing herself in an item song and at another, he resigned from his position as cultural secretary of Pakistan Tehreek-e-Insaf (PTI) – a party he supports ambitiously – because he did a movie that was against his own beliefs and therefore he could not continue his role in PTI.

If you find the above mentioned description absurd, you are not alone.

In this Facebook post, Abbasi made it seem like somebody had forced him to do this movie and he is now either embarrassed for it or just does not want be called a hypocrite for his contradicting views. Either he is thoroughly confused about what he wants from life or is using cheap tactics at publicity to remain in the limelight right before the release of his movie.

If a movie is against his ‘religious or moral beliefs’, then why agree to do it in the first place? He shot the entire film and now, right before its promotional campaign, he expects everyone to understand that it was against what he stands for and he is ashamed of it? Such views are childish, if not utterly idiotic.

In my opinion, it was never about the movie. Perhaps, he left PTI because he no longer wanted to be a part of it and this was just an excuse to escape Naya Pakistan’s downfall.

Whatever the reasons might be, what annoys me the most is the fact that Abbasi acts like the moral police of our industry, but refuses to comment upon his own glaring flaws. He has to comment on every movie, every song that comes out; he questions the morality of his fellow actors and actresses, then clarifies his statements by claiming he has nothing against them personally. And in his act of commenting against actresses taking part in item songs, he exposes his own vile views.

It is evident that Abbasi has no moral ground to judge the actions of others when he himself is part of the ‘negative trend of the media’. Mudslinging is very convenient Mr Abbasi, but you cannot escape the consequences of your own actions.

In another rant on social media, he is said to have  shown his disdain for actresses ‘revealing’ themselves in item numbers. On the same hand, however, he is seen, in the trailer of Jawani Phir Nahi Aani, walking out of a pool, revealing most of his own body. So it is okay for a man to play a role in which he exposes his body walking out of a pool in a chaddi but a woman in a bikini? Hai Allah! If this does not reek of sexism, I don’t know what does. Might I add, he is not only seen emerging from the pool, he is seen ogling at a woman in… wait for it… a bikini!

Whether he believes it or not, the way he mentions ‘women in bikinis’ in his status sounds derogatory. No one has to twist his comments to make them sound like they are ‘against an individual’ because they aren’t just against that one individual they are against an entire gender! Would he describe a male co-worker in the same way? I think not.

If what these female actors do mortifies you to this existent, why work with them, Mr Abbasi? Why not just boycott the entertainment industry altogether? You clearly hate so much of it anyway.

I understand that there may be issues with our entertainment industry and we are still trying to find our roots and develop our own personality, but if you can’t be a part of the solution, do not be a part of the problem. In Abbasi’s case he is part of the problem, and in denial of it. Go into direction – make classy movies. I don’t remember there being a roadblock. In fact he has already tested the waters as a director. It’s simple really – be the change or shut up!

Correction: In an earlier version of this blog, it was incorrectly mentioned that Hamza Ali Abbasi had claimed to asking his directors to get him to come out of the pool instead of a women in a bikini. That claim is false and the error is regretted. It has now been rectified. Our apologies for the inconvenience.

The writer is a student of journalism who loves to travel and observe reality in a unique way. She tweets as @syedadanyazaidi