Mighty Kangaroos did what they do best – win World Cups 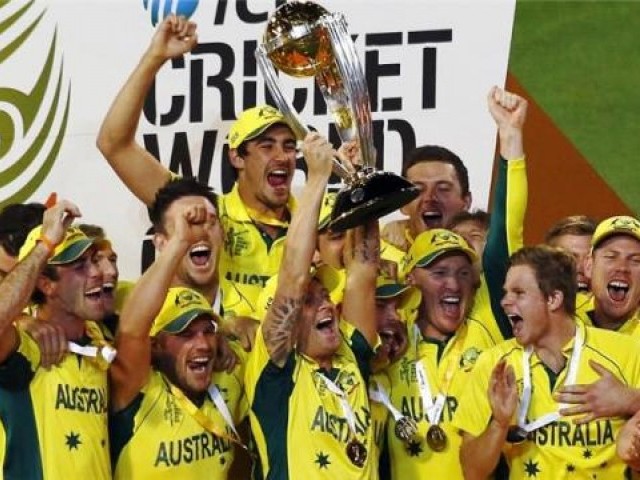 They are called ‘mighty’ for a reason and they proved it with another feather in their cap; a record fifth World Cup title. PHOTO: REUTERS

A record attendance of 93,013 at the Melbourne Cricket Ground (MCG), an unbeaten opposition in front, nerves, anxiety, tension, stress and everything ready to break the concentration needed to focus on the job at hand.

But how well did the mighty Aussies respond? They are called ‘mighty’ for a reason and they proved it with another feather in their cap; a record fifth World Cup title.

It was a heartbreak for New Zealand. They played brilliant cricket right throughout the tournament but lost the match that mattered the most. But they have won many hearts. Photo: Reuters

The day must have started normally for everyone else on the planet. The sun must have come out when it is supposed to, the early birds would have sang the same songs as they always do and the wind must have been blowing like it always does. But for the 22 players, who were going to battle it out today for the ultimate world champions’ title, everything would have meant something.

They must have found the sun rather bright, the birds must have sang songs of their impending victory and the wind? Well, that must have been flowing in the direction they wanted.

Even nature did not know who to favour. It just laid back and enjoyed the show. It did not interfere a bit. No strong winds, no rain or overcast conditions… just plain sunlight.

New Zealand captain Brendon McCullum came out alongside Australia skipper Michael Clarke for the toss and won the only battle of the day. The coin went up; he called heads and heads it was. He knew he had to bat as chasing at the MCG has never been easy under lights.

Throughout the tournament, McCullum has displayed outright class up the order with his clean hitting but yesterday, Mitchell Starc shot him down even before he opened his wings — clean-bowled in the first over. Ross Taylor and Grant Elliot’s partnership of 111 runs for the fourth wicket was the only silver lining for the Kiwis, which, once broken, led to a collapse they could never recover from. James Faulkner accounted quickly for two batsmen in the 36th over to incite the down fall and other bowlers then pooled in to make sure there was no coming back for the Kiwis.

A meagre 184-run target for the team who had already won cricket’s premier event four times and that too thrice in a row? Piece of cake. Aaron Finch was caught and bowled by Trent Boult in the second over to add a little spice to the proceedings but after that, a smooth sail was inevitable for the Kangaroos.

Clarke (74) and Steven Smith (56 not out) made sure their team neared the target with ease but the Australian captain could not hit the shot for glory and walked off to the dressing room one last time adorning the yellow colour in the ODIs when he was bowled by Matt Henry in the 32nd over.

Smith then hit the winning runs, a four towards square leg, and hugged Shane Watson as Australia did what they are very good at — winning World Cups.

There might be different opinions on their victory but in the game of cricket and in life, the golden rule is to be the best on the day it matters the most and Australia did just that. They came out second best from their pool and against Pakistan in the quarter-finals they showed nerves of steel against Wahab Riaz’s pace. They were portentous against the defending champions India in the semi-final. And when it came down to the last jump, the Kangaroos easily leaped over the Kiwis to grab the world title.

Retiring Michael Clarke could not have gotten a better farewell than this but he didn’t forget Phillip Hughes on the occasion.

“This victory is dedicated to our little brother Phillip Hughes. Hughesy used to party as good as any of them so I guarantee we’ll celebrate hard tonight.”

McCullum also seconded Australia’s omnipotence in the final with the following words:

“We played some outstanding cricket, but we ran into an outstanding Australian team tonight who continue to set the way in world cricket. Michael Clarke deserves to bow out as world champion.”

Who else than Michael Clarke to lift the trophy and after a magnificent 74 in the final. Photo: Reuters