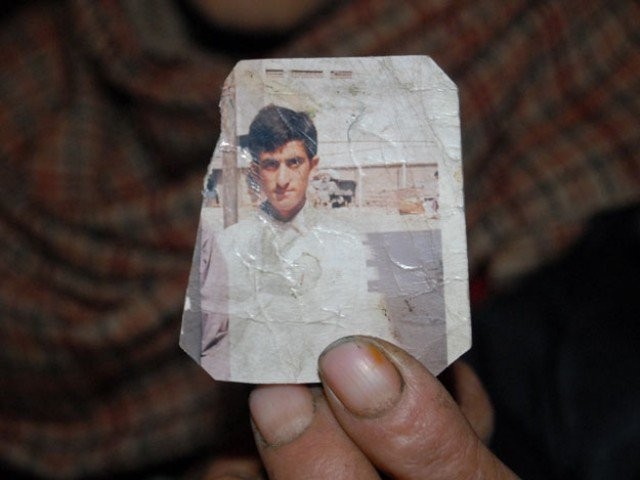 This photograph taken on March 12, 2015 shows one of the Azad Kashmir parents of convicted killer Shafqat Hussain holding a photograph of their son in Muzaffarabad, the capital of Pakistani-administered Kashmir. PHOTO: AFP

The case of Shafqat Hussain has been in the lime light for many days now; much has been written about the circumstances surrounding it.

If we browse through social media regarding this issue, conflicting opinions are found, ranging from the very typical “propaganda by foreign funded NGOs” to the more realistic “Shafqat killed a child so he should be hanged too” and many in between. But most people seem to be confused about how the juvenile justice system in Pakistan works.

Things are virtually the same on electronic media; some are calling for a retrial on the plea of juvenility over the allegedly forced confession through torture by the police, while others are pointing out how these pleas might not be taken before the trail court or the high court or the Supreme Court.

Shafqat has also exhausted the appeal for mercy, seeking pardon, which only the president of Pakistan can grant under his constitutional powers available under Article 45 of the Constitution of Pakistan 1973.

Therefore, this takes us to a whole new level of legal discussion.

Can Shafqat take the plea of juvenility now? Does the Apex Court have the power to review the case after so many years? Can death penalty be halted at this late stage?

All of these are pressing questions. But they require a long discussion, which is not the current point of my blog. The point of my piece is to discuss the obvious fallacies in the way we are dealing with this issue – we are focusing on one particular incident and not looking at the larger legal framework involved around the juvenile justice system in Pakistan.

I have been working on juvenile justice since 2007. With other colleagues of mine, we provided legal aid to more than 450 juveniles in more than 700 cases in courts of Lahore, Karachi and Quetta. I am not an expert but I do have some knowledge and understanding behind the concept of the juvenile justice Pakistan and the way it has developed over the last few decades around the world.

For me, it is not a question of whether Shafqat Hussain was a juvenile at the time of committing the offence or not. The real question for me is: Can Shafqat, assuming he was a juvenile, be given the death sentence under the Pakistani law?

And the answer to this important but unasked question is, sadly, yes.

I know many will point my attention to section 12, subsection ‘a’, of the Juvenile Justice System Ordinance 2000 (JJSO) which states that a child cannot be given the death sentence, under JJSO section 2, subsection ‘b’, stating that a child is a person who has not attained the age of 18 years.

Then am I not contradicting myself by saying yes to the question I asked earlier, yet accepting that a person below the age of 18 cannot be given the death sentence?

In 2012, the JJSO was amended to empower the ATC to work as juvenile courts for children being charged under the Anti-Terrorism Act 1997. Therefore, there are two scenarios to this case – the situation before the 2012 amendment and the situation after it.

Firstly, with regards to the situation before the 2012 amendment, in my defence I give you section 14 of the JJSO, which says that this law is in addition to and not in derogation of any other law of Pakistan. This means that the JJSO plays a secondary role when the child is being tried under the anti-terrorism court (ATC) governed by the Anti-Terrorism Act 1997, as separate juvenile courts were not established at the time of Shafqat’s trial.

Under the Anti-Terrorism Act, the ATC can give the death penalty to any person regardless of their age – which is what happened in Shafqat’s case. This means that there is no irregularity or illegality committed by the trial court even if Shafqat was a juvenile at the time the offence was committed.

As for the situation after the 2012 amendment, if for some reason the case is sent back to the trial court for retrial, it will go back to the same ATC which can give the same death sentence to Shafqat again.

So what is the solution then?

The relaxation for juveniles on the basis of age is a settled principle all over the world and we can adopt the same laws and procedure to ensure the protection of children in conflict with law. The discussion should not limit itself to the current case only. I believe that we are making a wrong argument. The whole juvenile justice system of Pakistan needs to change.

The existing JJSO is neither comprehensive nor sufficient. We have to fulfil our commitments to the United Nation Convention on the Rights of Children (UNCRC). As per article 37 of UNCRC, no child should be given the capital punishment. JJSO needs to over-ride all other laws in the country while dealing with cases of children in conflict with law. This can only be ensured by establishing separate juvenile courts as mentioned in section 4 of the JJSO.

For juvenile cases the determination of age should be the first concern of the court, rather than deciding the age of the juvenile when the matter is raised by the defence. Hopefully, the civil society of our country will make efforts in the right direction so that no other child is forced to face what Shafqat has been going through over the past so many years.

He is a child rights activist since 2001 and advocate since 2004. He has a prominent understanding and experience of child and women rights issues. He tweets as @ahmarmajeed (twitter.com/ahmarmajeed)