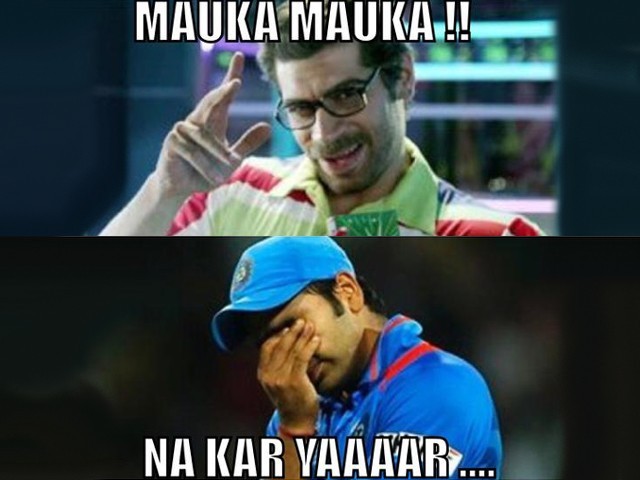 We feel the urge to demonstrate our patriotism by mocking our neighbour. PHOTO: TWITTER

India’s dismal performance in the World Cup semi-final was a huge disappointment. India lacked strategy against the mighty Aussies and their performance was shocking for many. However, what I found more harrowing was how Pakistanis revelled in the misery of the Indians, some even claiming that this was Pakistan’s revenge.

Misbah, what are India's chances of winning now? pic.twitter.com/LKHYaA9Hmp

Let’s make this absolutely clear – there is no room for relishing in someone’s misery even if it is in good spirit or done with good intentions. This is akin to hitting someone with an iron rod and then apologising for it.

Even if we are to assume that to seek “revenge” is an honourable act, I still fail to see how India’s loss was Pakistan’s revenge? Australia’s win was Australia’s win – not ours. Furthermore, we must not seek revenge. Instead, Pakistanis should implement corrective measures to improve their performance and skills.

The best course of action would be to completely overhaul the cricket team and free it from the grips of lobbyists and bureaucracy. Train the players to be sportsmen rather than politicians. Effective immediately, they should remove the likes of Umar Akmal, Ahmed Shehzad and politely request Shahid Afridi to resign completely – even from the T20 format.

I was flabbergasted at how Akmal refused to make a single run just because Sarfraz Ahmed was on the verge of completing his century. Keeping generous gestures aside, Akmal’s job was to win the match, which he ignored.

The general attitude which prevails in our society is “if I can’t be productive, I won’t let you be productive either”. Such mentality needs to be eradicated for good if Pakistani cricket is to survive and flourish. Otherwise, the day is not far when even associate teams would surpass ours in performance.

Even though Afridi holds a special place in Pakistani cricket, it is time to bid him farewell from T20 as well. It is astonishing how he is unable to strategise when picking his shots. Boom Boom, without any strategy, is a recipe for disaster. We need batsmen who can make quick runs as well as survive on the wickets.

When we celebrate another’s defeat, rather than someone’s victory, it speaks volumes about our national character. It is a negative thought pattern which does absolutely nothing to promote brotherhood and peace in the region. It would be better to celebrate Australia’s win rather than India’s loss. When we start to teaching our future generations that another’s loss is worth celebrating, it sends the wrong message and opens doors to all sorts of negativity and cynicism.

The question to ponder over is why does it make Pakistanis feel good over India’s loss? The answer lies in the years of hatred that our minds have been brainwashed with, through textbook manipulation and narrative of patriotism. We feel the urge to demonstrate our patriotism by mocking our neighbour, with whom we share so much.

The volatile junction at which Pakistan finds itself today can never be reversed if we continue to breed the next generation by perpetually propagating India in a negative light. We should put the memories of partition behind us and look towards the future, one where both countries can work together to improve economic prospects of its citizens. A future where we can see a demilitarised border and citizens can navigate without fear. A future where we can have open borders like the European Union. Where cross border trade would bring about significant improvements in the lives of the people.

To gloat over India’s loss is most certainly not any compensation for Pakistan’s lack of performance. Such displays would only promote animosity and resentment between the two – something which we all must disapprove of at all levels.