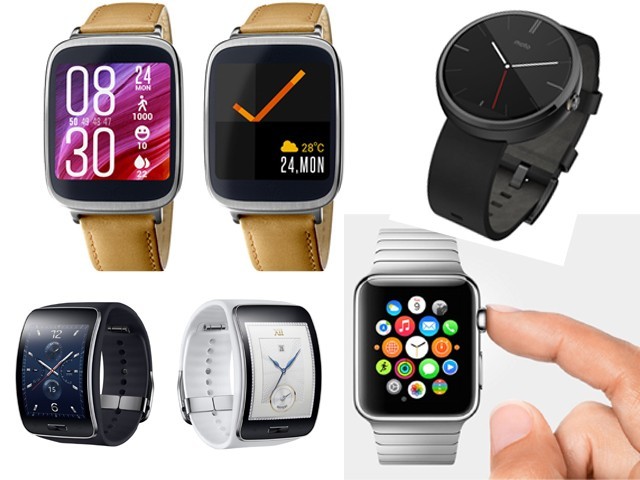 With the launch of the Apple Watch, many believe it will bring a revolution in the gadgets industry. Smart-watches will replace traditional watches, similar to how smartphones replaced feature phones after the launch of the iPhone. On the other hand, many believe that theApple Watch will be a failure and there is no need for smart-watches explicitly, especially when everyone has smartphones.

Therefore, I have put together a list of the best smart-watches, with their specifications, pros and cons and other details.

Apple announced its Apple Watch first in September 2014, and since then we have been waiting for the watch to release. Soon after the announcement, the Apple Watch became the top gadget in the industry that everyone talked about.

The Apple Watch would be compatible with iPhone 5, iPhone 5s, iPhone 5c, iPhone 6 and iPhone 6 Plus, running iOS 8.2. It would rely on a connected iPhone device to perform many of its functions. When talking about the features and specifications of the Apple Watch, it will have a 1.5 and 1.7 inches sapphire crystal display, a RAM of 512MB and 4GB of built-in storage.

Apple is putting in substantial efforts to bring the Apple Watch as a premium fashion item. And for this, Apple has a very convincing launch strategy. Soon after its announcement, the watch made its first global appearance on the cover of Vogue China and then we saw it again at the Paris Fashion Week.

While the Apple Watch is the only choice for Apple fans to buy, the best smart-watch option for Android users is the Motorola Moto 360. The Moto 360 was announced by Motorola Mobility in March 2014 and was released in September 2014.

Moto 360 is an Android wear-based smart-watch and is very much like the typical wrist watches in design. Motorola used steel casing, a removable wrist band and a circular capacitive touch display to make its product. The Motorola Moto 360 is water-resistant, and it also has wireless Qi charging.

Moto 360 comes at a very affordable price at $249.99. It is stylish and looks just like a traditional wrist watch. It is lightweight and comfortable to use. Another quality is that you can charge it wirelessly. However the battery life is not very good. Moto 360 specifications put it at the top of the Android running smart-watches.

The Samsung Galaxy Gear is an expensive smart-watch and everybody cannot afford it with Samsung offering it at $299.99. When talking about the plus points of Galaxy Gear S, incoming calls are easy to see, its design is very good and it also has a beautiful display. It is also pretty comfortable to wear.

On the other hand, the biggest low for the Samsung Galaxy Gear is its price. Its external charging case and feature of social network support also curbs its demand.

The LG G Watch R is an android wear-based smart-watch which was released by LG and Google on October 25, 2014. The LG G Watch R is another watch which, like the Motorola Moto 360, has a circular display but unlike the Moto 360, the G Watch R has a full circular display. It also features a notification system, which is based on Google Now, and this new feature allows it to receive spoken commands. The watch is water resistant as well. When we compare the specifications of LG G Watch R with other android smart-watches, it is much better and more solid.

Its price might be considered high, as compared to the Moto 360, at $299.99. The biggest advantage of this watch is that it has a full circular display which is bright and clear. They have made it like a traditional wrist watch while offering smart-watch functionality. The two-day battery life is better than the Moto 360 but it is still not good enough for an average person’s use.

ASUS announced its first wearable device at IFA 2014. The ZenWatch has a square display; even though the body of the watch is nicely rounded, it is not a circular display smart-watch.

The ZenWatch will run the latest version of Android Wear, Android 5.x. The watch also features a heart rate sensor. Nobody expected ASUS to enter the wearable world and the announcement of the ZenWatch was a surprise. The watch is expected to come at a very reasonable price of just $199, making it the cheapest Android Wear smart-watch in the market with support of Android Lollipop 5.0. The design of the ASUS ZenWatch is very cool and is crafted beautifully.

The watch has interchangeable straps and the price of the watch will help attract people. The biggest minus point for the ZenWatch is that it lacks a fitness feature. Also, the screen of the watch is pixelated and it is not very comfortable to wear.

These smart-watches or wearable gadgets are only in the initial phase of their evolution and we just have their first generation in the market as yet. Initially, smart-watches failed to get the attention of consumers, as opposed to the widespread acceptance that smartphones enjoyed, but I believe it has more to do with poor planning and lack of strategy of the companies than the product itself.

However, with the announcement of the Apple Watch, many people are now open to smart-watches and I am optimistic that we will witness a positive progress in this area.