The Theory of Everything: Serenely comforting yet harrowingly moving 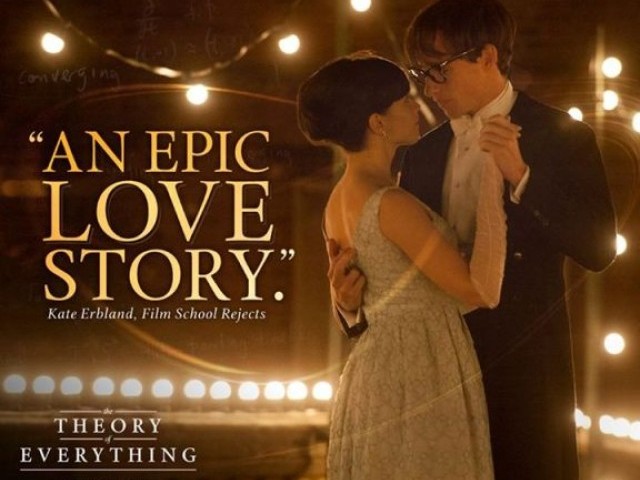 Despite its slow-pace and suburban setting, this movie manages to pack an eclectic mix of flavours that will surely satiate your cravings you expect to be satiated by a good movie. PHOTO: THEORY OF EVERYTHING FACEBOOK PAGE

Stephen Hawking, a British theoretical physicist, is one of the most extraordinary and brilliant minds that we have in the world today. His is a brain of astounding powers.

The ground-breaking ideas that he has unleashed onto the world are significantly responsible for transforming the ways with which we make sense of the universe and have established him as a ubiquitous sensation; a personality so impeccably prominent and pertinent that he has been considered by many as the equitable heir to none other than Einstein himself.

The lives of such figures have been a fertile breeding ground for the interest of filmmakers and have resulted in a plethora of conventional biopics. However, James Marsh’s biopic, The Theory of Everything, despite its banal plot, is rendered unconventional due to the tour de force performance by Eddie Redmayne, for which he won an Oscar earlier this year.

The movie is based on a memoir written by Professor Hawking’s wife, Jane. It tells the story of a young and eccentric 21-year-old Hawking who is pursuing his postdoctoral studies at Cambridge University. There he meets Jane (Felicity Jones) during an ephemeral tryst at a college party. Soon they fall in love and subsequently get married.

While engrossed in his research at Cambridge, one bright, sunny though utterly unfortunate day, Stephen falls perilously and post-diagnosis finds himself at the mercy of a motor neuron disease which challenges him emotionally and physically, though never mentally. Initially satisfied by the fact that his brain will always work, he is later confronted by the dilemma that due to his diminishing physical vigour, he would not be able to convey and express his ideas to others.

As the disease germinates and flourishes, it deters his physical vitality, leaving him motionless, speechless and in the end, wheelchair-bound. However, fortunately, contrary to doctors’ predictions, Stephen lives way beyond the two years he was initially expected to live.

As their portrait of marriage blossoms with colours, some vivacious and some dull, Jane’s embarks on a test of endurance. While Stephen’s physical afflictions begin to increase alarmingly the strains in their marriage develop slowly and gradually. With Stephen’s deteriorating illness, three children to look after and her own studies, career and aspirations at stake, Jane soon finds herself cocooned in a struggle to be a loving and caring wife.

Although Redmayne stole the show with his unflinching and visceral performance, Jone’s performance is no less than exemplary. Her character is saturated with such suavity and finesse that even in the quietest and simplest scenes, you are compelled to succumb to the emotional gravity of her character and you give in, feeling sympathetic, feeling a surge of compassion for her doggedness and loyalty, and almost falling in love with her.

This film will leave you embroiled in a battle of contradictory emotions. You will feel ecstatic at Stephen’s relentless efforts for excellence and you will feel gloomy at his melancholic separation with Jane. You will roar with guffaws of celebration when Stephen’s book, A brief history of time, gets published to colossal critical and commercial acclaim but you will loom with sadness during that last scene, which in itself is a masterpiece.

This particular scene carries enough emotional momentum to make you choke on your tears and to leave you dizzy with a storm of poignant sentiments.

Marsh has excelled in making a cultured, tear-jerking and emotionally wrecking classic which gives us a breath-taking insight into the dazzling mind of a scientific genius. The scenes in this movie are as immaculately contrived as are Hawking’s theories. Marsh portrays the life and times of Stephen Hawking with such sheer intelligence and impeccable execution that you feel that you have just witnessed a valorous act of uncanny creativity and exuberant prowess.

So, whether you are a physics-fanatic or not or even if you do not know who Stephen Hawking is, yet, I suggest that you watch this movie. For this is much more than a biopic about the awe-inspiring life of a leading scientist. It deals with much grander themes and will metamorphose your ideas on life, marriage, fidelity and endurance against a physical impediment.

Despite its slow-pace and suburban setting, this movie manages to pack an eclectic mix of flavours that will surely satiate your cravings.

This movie is as serenely comforting as it is harrowingly moving. For its beautiful scenes and a barrage of emotional splendour, garnished by towering performances of the past year by Eddie Redmayne and Felicity Jones, I will give this movie 8.5 out of 10.