India, you will have to #GiveItBack now 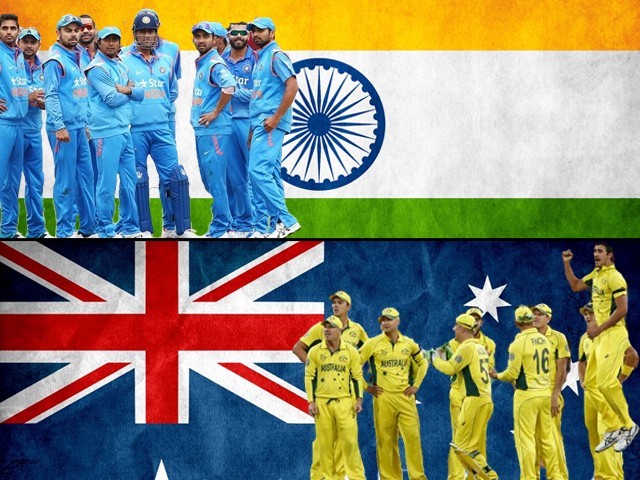 The reason for Australia’s victory today was quite evident. They were psychologically riding over the Indians throughout the match.

It couldn’t have been any other team than Australia who could knock the unbeaten defending champions out of the 2015 World Cup. And when the time came in the semi-final at the Sydney Cricket Ground, the Kangaroos made sure they did so.

Before presenting the review of Australia’s magnificent World Cup campaign, I would like to clear that this defeat does not mean that India were not challenged in the tournament and came till the second last stage without any serious threat. But they were only pushed to the limit once against Zimbabwe while chasing a 288-run target. In the end, MS Dhoni and Suresh Raina made sure they didn’t topple as they chased down the target in 48.4 overs.

Australian batsman David Warner (C) walks off the pitch after he was caught out by India’s Virat Kohli off the bowling of Umesh Yadav (L) during their Cricket World Cup semi-final match in Sydney, March 26, 2015. Photo: Reuters

Meanwhile, the reason for Australia’s victory today was quite evident. They were psychologically riding over the Indians throughout the match.

No one can forget the torment India had to face since their tour of Australia started back in November 2014. Australia beat them in the Border-Gavaskar Trophy 2-0. If that was not enough to push their moral down to below-normal level, India lost every match of the tri-series against Australia and England in January 2015. And the knockout punch was delivered by Australia when India faced the World Cup co-hosts in their first warm-up match and lost by 106 runs at Adelaide on February 8.

No one was expecting the Indians to reach the semis after such a murky run Down Under, but they did. And no one was expecting the Kangaroos to lose easily at their home and they surely did not. They were riding on the back of the tri-series victory against England in the final and beat their opponent by big margins in the warm-ups — India by 106 runs and the UAE by 188 runs at Melbourne.

They were put up against England in their first group fixture of the World Cup and beat England by 111 runs as Aaron Finch scored 135 runs off 128 balls and later Mitchell Marsh bagged a five-for to contribute to his team’s victory.

The match against Bangladesh was a washout but with the ominous form the Aussies were in, they would have run over the Bengali Tigers with ease.

The Kangaroos were up for the Kiwi challenge in the next encounter. Both teams showed that they are in an unbeatable form until Kane Williamson showed that he was the difference between both the sides. He hit a six off the last over to help his team end the unbeaten run of the Australians. Mitchell Starc was the man of the moment for the Aussies as he bagged six wickets with two at the pinnacle moment when New Zealand needed just four runs to win with three wickets remaining.

They lost but they were not out of the event.

A 275-run victory against Afghanistan followed and after that the Sri Lankans were the target. Australia scored 376-9 courtesy Glenn Maxwell’s 102 but Kumar Sangakkara replied with a 104 in an attempt to lead his team across the line. However, the Islanders were not successful in their run chase due to the some good death bowling by the Aussies.

The next encounter against Scotland was a walk in the park for the mighty Aussies as they won by seven wickets chasing a meagre 131-run target.

They were second in their pool A and were scheduled to play against the mercurial Pakistan side. Shane Watson clarified Aussies’ position against the men in green in very interesting words,

“They will either blow us or self-destruct; there is no midway for them.”

Australia made sure the Pakistanis did the latter and self-destructed. Dropped catches and a poor batting performance helped the Australians to easily chase the 214-run target in the quarter-final against Pakistan and move on to the second last hurdle against the defending champions India.

The encounter was not as fierce as the other semi-final between New Zealand and South Africa but there were some special moments in the match. Steven Smith’s 105-run innings, Aaron Finch’s steady 81, Maxwell and Mitchell Johnson’s blistering cameos and later while defending a 329-run target, exceptional and calculated bowling from all the Aussies pacers.

The Indians are out of the title race and it might be an end to the annoying yet creative ‘Mouka Mouka’ ads but truly it is a serious ‘mouka’ for the Australians to lift the World Cup trophy for a record five times.

If they can manage to run-over the miraculously in-form Kiwis at the Melbourne Cricket Ground on Sunday March 29, this young and replenished Aussie side led by Michael Clarke will be able to write its name among one of those great teams who adorned the baggy green and won the premier event of the game of cricket.