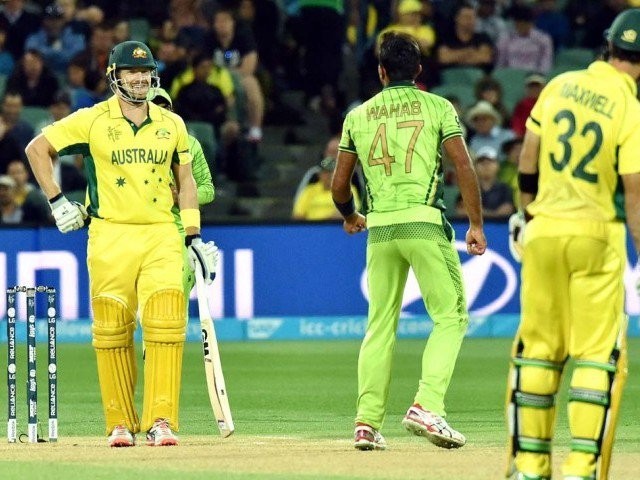 Wahab Riaz and his legendary bowling spell against Shane Watson have touched a chord with cricket fans all over the world. Riaz has made us realise that, in this world of powerplays and fielding restrictions, bowlers can also put on a show that “oohs” and “aahs” hundreds of millions of viewers.

The fast-bowler needed just a few overs to demonstrate that a well placed bouncer is just as entertaining as a well timed sixer. The aggressive interaction between Riaz and Watson also showed how there is so much more to cricket than just bowling and batting.

But this post is not about Riaz and how he’s the best thing to happen to Pakistan cricket in years. It’s also not about Watson and his sledging Riaz while the latter was batting. This is about the ICC’s rather ridiculous decision to fine Riaz and Watson for their interaction on the field.

Cricket is a fiercely competitive sport and not a tea party. The ICC needs to start treating it as such.

Riaz and Watson stared each other down, taunted one another, made gestures, blew a kiss and (maybe) even swore a bit.

Sledging should be tolerated to add some rivalry and aggression to the game. It will make the game more entertaining and much more exciting. It will also serve to re-balance a game that is too heavily tilted in favour of the batsman.

Other sports exhibit a great degree of tolerance when it comes to players abusing, gesturing, staring, swearing, or even fighting. If done within limits (we don’t want players bleeding on the ground), it raises the tempo of a game and makes it much more entertaining. It also leads to development of long lasting rivalries between players. If intense enough, these rivalries generate their own fan base, leading to increased viewership and a passionate fan following. That can’t be bad for any sport.

Shane Watson and Pakistani bowler Wahab Riaz embrace each other at the end of the match. Photo: AFP

Towards the end of the match, Riaz even shook hands with Watson and congratulated him on their victory. All Riaz did was let his ball do the talking. And the ICC thinks he should be punished for that?

Brian Lara has already come on record criticising the ICCs decision to fine the two players.

It’s about time the hundreds of millions of cricket fans out there sent a similar message to the ICC. The ICC needs to stop acting like the headmistress of a finishing school and let some aggression back into the game.

I have setup a petition to send the following message to the ICC:

“Cricket fans feel that aggression and rivalry on the field is fun – just like a wicket or a sixer. The ICC code of conduct needs to be revised to allow more aggression in player interaction on the field. As a first step, the decision to fine Wahab Riaz and Shane Watson should be reversed.”

If the ICC is serious about increasing cricket viewership and participation, it will consider the suggestions seriously.