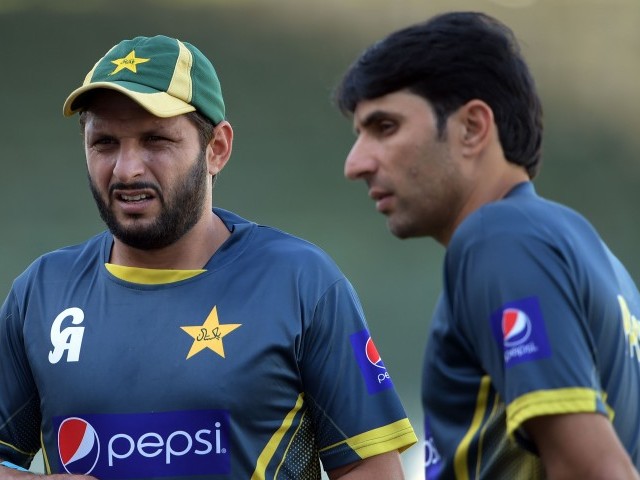 Dear Misbah and Afridi, thank you for making us laugh and giving us incredible memories. You will always be remembered in the history of Pakistani cricket. PHOTO: AFP

“It looks bad. Who will save the middle-order now?”

“Don’t worry, Misbah is still about to play.”

“Oh man! The strike rate is so low! We are definitely losing this.”

“I am counting on Afridi. He can save the game.”

These are some of the many conversations that take place between Pakistani cricket fans during any important match. But sadly, it will not happen anymore.

Misbahul Haq and Shahid Afridi will no longer accompany our heated discussions. They will no longer dominate our debates. And I wonder if there will ever be another duo about whom we would be as passionate as we are for these two.

Shahid Afridi and Misbahul Haq, during a match against Sri Lanka. Photo: AFP

Will there be a new Tuk Tuk and a new Boom Boom?

Not in the distant future.

Who will perform in spite of being hated by many?

Who will hit the shots and aim for the boundaries during pressure?

Their absence will be sorely felt. And those who hated Misbah or thought Afridi was irrelevant, will now know how an ODI team looks like without these two powerhouses.

Pakistan played its last match of the World Cup against Australia yesterday and said goodbye to the trophy for another four years. While the tournament had some great individual performances, we had our lows. Our dismal start made things a lot harder for us. And that is something that the existing players should understand.

We cannot ignore the outstanding and unpredictable innings of the man who made the fastest century for Pakistan, who served us for 19 years, who took some amazing wickets and caught some incredible catches. The man who made us exhilarate with joy by bringing home the T20 World Cup trophy. He gave our nation many reasons to laugh.

I am sure no one can ever replicate the pressure and fear he exerted on other players. I know that he failed in achieving his happy ending but we still have tonnes of happy moments to appreciate and respect him for.

Many have misunderstood his patience, his intelligent cricket, his strength and his ability to give confidence to other players in the team. People have cussed him, abused him, have mercilessly criticised him and even questioned his role in the team. Yet, he has remained nothing but loyal to the game and steadfast to his vision.

He stood by his team in the toughest of times. He scored when the team needed him to. He never scored a century but made sure he was the leading run-scorer from our nation whenever it was required. He was the second Pakistani batsman to score 3,000 plus runs in ODI as a captain. Furthermore, he captained this bunch of amateurs to so many victories, saved the team from so many embarrassing totals and, shamefully, he is still the most criticised player in the history of Pakistan.

While it is thoroughly disheartening to see such a quality player retire, it is even more painful to know that many are happy to see him go.

They will be missed

These players gave us moments that nobody ever could. We owe them a lot of gratitude and we need to keep them in high esteem. It is their right to be respected. These are our real heroes and if we really appreciate their services to this country, then we need to give them a loving farewell to express our gratitude, like other nations do.

Here are some of the tweets that paid tribute to these two players and their efforts for our team.

My father died when i was in 9th class. I know life with out parent is difficult. #MisbahUlHaq #ThankYouMisbah

His stats can be debated upon, but his impact on the game is & will remain unmatched for years to come. #ThankYouAfridi !!

Cricket won't be cricket without you — from a fan girl. #ThankYouAfridi pic.twitter.com/kInNolqEJO

#ThankYouAfridi for providing us Cricketing entertainment. You're always a hope for fans in the country. Fans will miss chants of BOOM BOOM.

This is probably the saddest World Cup tournament for Pakistani cricket fans. Our assets, our anchors, will always be cherished and revered.

Dear Misbah and Afridi, thank you for making us laugh and giving us incredible memories. You will always be remembered in the history of Pakistani cricket as heroes.

He is a journalism student, blogger and a keen observer. He blogs at sharbatwala.wordpress.com/ and tweets as @sheharyarJaffri (twitter.com/sheharyarJaffri)

To all the retiring cricketers: Here is why we will miss you!