The birth of widows in conflict ridden Kashmir 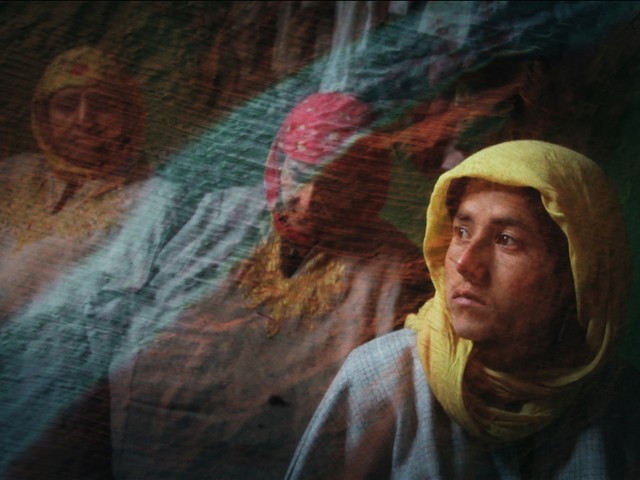 Three sisters in particular, Ruqaiya, Zarifa and Shamima, lost their husbands to this conflict and have been destined to live alone. PHOTO: SHOWKAT NANDA

In 2008 and 2010, Kashmir witnessed the most severe and popular anti-India movement leading to the death of more than 200 individuals, mostly teenagers. The decade’s old conflict has given birth to many widows and half-widows. The men who died in the Kashmir conflict can never come back, but their memories bring joy as well as pain to their families who are yearning to see their graves.

Three sisters in particular, Ruqaiya, Zarifa and Shamima, lost their husbands to this conflict and have been destined to live alone. But they did not lose hope because they decided to live for their children, to see them grow up. The widowed sisters reckon that their struggle has kept them strong enough to raise their children to be focused individuals with big dreams.

These three widows are the daughters of Abdul Ahad Lone who hailed from Sheeri, a village six kilometres away from the town of Baramulla in Kashmir. He was a retired peon who died in 2013 due to a brain haemorrhage.

During college days, when I was 19, Ruqaiya was a widow living next door whose 29-year-old husband, Nazir Ahmad Mir, a baker by profession, was killed during the 2010 unrest on July 30th. As per the media reports, Mir was shot in the head outside his bakery shop in Pattan, North Kashmir. Ruqaiya was married at the age of 24 and widowed at the age of 26. As her neighbour, we got to know her very well and she would tell us about her predicaments.

Thirty-year-old Ruqaiya may seem like an ordinary woman but she is unique and successful in her own right with a four-year-old son, Amaan, who was just 18-days-old when he lost his father. Mourners stood huddled around the coffin with bloodshot eyes.

A glimpse of what she faced and conquered in life defines success as the ability to stand strong in the face of adversity and getting back on one’s feet after suffering from a great fall. The chronicles of her life give an enlightening definition of success through a journey of heartbreak.

“I am living the rest of my life for Amaan. I won’t marry again; we are not destined to stay happy. My elder two sisters, Shamima and Zarifa, have also lost their husbands as a result of this war. I would love to make hundreds of sacrifices in order to keep Amaan happy,” said Ruqaiya with tears rolling down her cheeks.

“We were informed by the police that he had died of a heart attack. But when his dead body reached Sheeri, the doctors who examined the body said that he had sustained a bullet injury to his head. I suddenly went numb and don’t remember anything after that,” recalls Ruqaiya.

Ruqaiya and her son are now living with her mother.

This is the story of the three widows.

On a beautiful summer day in Sheeri village, a soft tinge of green lent freshness to the cool breeze outside. I sat near a window in my room, sipping on tea and immersing myself in the beauty of nature looking at faraway snow-capped mountains in the horizon. Sheeri is situated in the North of Kashmir near Baramulla. It lies in the lap of mountains, surrounded by orchards and paddy fields, it paints a picturesque landscape.

I looked into my neighbour’s courtyard and saw Ruhi, a school going girl, chatting with Ruqaiya who was feeding the infant in her lap. Ruhi was holding a bucket filled with water and asked Ruqaiya for her son’s name.

“I’ll name him Curfew as he was born during the 2010 unrest,” Ruqaiya replied with a smile.

Ruhi broke into laughter and replied,

“Name him Azaad (free) since we are fighting for freedom since ages.”

The sound of clanking utensils, birds chirping, animals grazing and children playing filled the air. The morning breeze picked up speed. Leaves around Ruqaiya and Ruhi shivered. Ruqaiya told Ruhi with a smirk that the baby’s father is arriving by evening.

“We will both decide his name. I will let you know whether he’s going to be Azaad, Curfew or something else.”

Ruqaiya was oblivious to the events that would transpire in the coming hours.

She ended up naming the baby Amaan. He cried every time his lean mother, with swollen eyes and a scar on her hand fed him. It was afternoon now. The weather turned gloomy in the poverty stricken settlement. Puffs of clouds hung in the air like a curse. Darkness consumed the village. It was an unusual phenomenon.

I heard Amaan weeping. I had a strange feeling that something bad was about to unfold. I saw everyone running around and leapt for my pheran (a traditional cloak). I overheard that someone had died; another innocent life taken by the oppressor. The village wailed. I saw women mourning. Amaan’s mother fainted. Amidst the hysterical sobs, Amaan burst into tears. Blood curdling scenes from my neighbour’s courtyard made me teary eyed. God wept in heaven and it began to rain in Kashmir.

The gloom of autumn overshadowed the liveliness of spring in Ruqaiya’s courtyard. I felt paralysed as I watched through my window. Men were carrying a coffin on their shoulders. They entered the courtyard and placed it on the ground. A teenage girl could be seen amongst the wailing crowd, beating her chest and pulling her hair. She walked towards the coffin. She slipped, regained her balance and found her way to the coffin. She closed her eyes and opened the box. Nazir was lying peacefully in it; Ruqaiya’s husband and the father of her child.

His body was pierced with bullets. I could see his body through my window. For some, birth is joy and death is awful. One is born weak and can die powerful. Some die hungry, some die in joy, some in pain, and some for freedom. Death itself is a name, death is fame, death frees the soul, death is purity. The path to death can lead us to heaven or hell, as He has the key. The day shall come when the dead will come to life and set us all free.

Zarifa, Ruqaiya’s elder sister, got married in 1980 to a labourer, Mohammad Sultan. Among their three children, one son was picked by the army for having internal links with militants.

“Life has been a struggle, longing for my husband and feeding my children. My husband used to receive threats from militant groups to refrain from going to the army camp. But he was going there for his son, to get him released,” said Zarifa.

Sultan used to visit the nearby army camp every day in order to get his son released. After three months, his son was released.

“Just after finishing dinner, Sultan went to the bathroom and suddenly the electricity went off. I was searching for a candle in the room. I heard some men outside our house speaking in Urdu and yelling at each other. A minute later, I heard three to four gunshots and I hurried outside with the lit candle and saw my husband lying in a pool of blood. He was dead. I somehow dragged him inside and called for help.” recalls Zarifa while breaking down.

Ali Mohammad Bhat, also known as Sher Dil, was a militant turned Special Operations Group member in the Kashmir police. He was a hero for poor families in the Narvaw region of Baramulla district. Some alleged that he used to loot and plunder. Bhat was married to Shamima, Ruqaiya’s eldest sister, Shamima is now 47-years-old and they had two children, Tanveer and Nayeem.

It was one of the darkest days for Bhat’s family as the cold wave gripped the village. On December 28, 1998, Bhat was killed in an IED blast at Wagoora.

“When my husband and his aides stopped near a shop in Wangam Wagoora, after a few minutes, a grenade exploded and my husband died on the spot. My son and daughter did not eat anything for weeks.” murmured Shamima.

“In those days, I used to persuade him to leave his assigned job, begged him to live a normal life for the sake of our children. But he always refused saying, militants would kill him,” added Shamima.

Bhat’s son, Tanveer, left his schooling in 2007; almost a decade after his father was killed. At the age of 17, Tanveer started working at a medical shop in order to overcome the financial constraints faced by his family following his father’s death. Tanveer is now 23-years-old and supports his family as he is the eldest and only male of the house; hence the responsibility lies on his shoulders.

“I started working at a very young age, which would not have been possible if my father would have been alive. It would have taken me years to earn after finishing school. Also, I tried hard to stay in touch with my books, but it was not possible after my father’s death,” said Tanveer.

Shamima does not shy away from admitting that her son works at a medical shop to pay off the debts and earn for his family.

“A house without a husband is a challenge,” says Shamima. “I have taken debt from people and I have to pay it back. If my son won’t help me, then who will?”

She admits that work conditions are not healthy for her son but says that they do not have any other option.

“I remember when my sister, brother and I used to go for picnics, our father used to visit in his jeep to pick us and our friends. I wish he was alive to see his children prospering in life, and could see his daughter Kulsoom getting married,” recalls Tanveer.

“I hardly remember papa’s death as I was only two, but his death taught us a lot. We won’t let our mother face the difficulties alone. I want to become a social activist to serve my people,” says Tanveer.

At times, one wonders why widows like Ruqaiya, Zarifa and Shamima, amongst thousands of others live, their lives in misery. One should have a lot of admiration for them because they lead an extremely difficult life, a life nobody would want to live in this conflict-ridden region.

The three sisters never married again and have been living together since.

“A house without a husband is a challenge, living alone was in our fate.” – The three widows

Bhand-e-Pather, a fading art in Kashmir