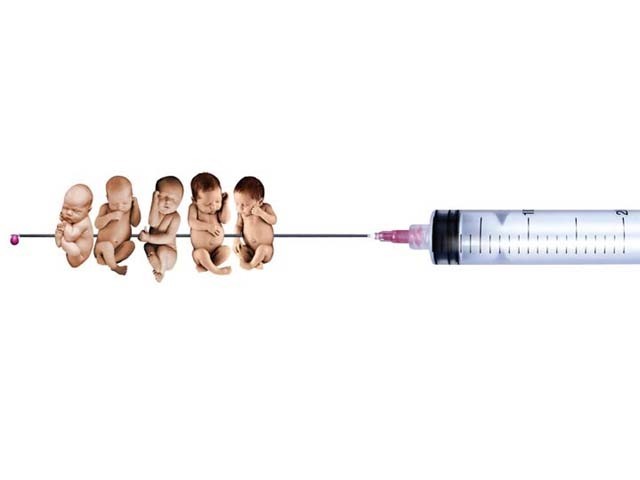 According to UNICEF, one in 10 Pakistani children does not survive their fifth birthday, and the majority of deaths are due to easily treatable diseases. PHOTO: World Health Organization (WHO)

In a country already strife with political, economic and social malaises, it is truly heart-breaking to see the gross negligence and inadequacy of the government costing the country millions of dollars and, more importantly, millions of lives.

Pakistan just wasted 1.3 million doses of vaccine worth $3.7 million donated by UNICEF to protect children from deadly diseases. The vaccines had to be stored in cold temperatures to remain effective but, according to a Health Ministry official, the frequent power outage was the main cause of the loss, as top management failed to address the problem despite complaints by lower staff.

Two officials have been suspended over the wastage; however, I wonder if the lower staff members, who had bothered complaining in the first place, should have been the ones to bear the brunt of the laxity of their seniors. The aforementioned statement contradicts the one issued by state minister of National Health Services Regulation and Coordination, Saira Afzal Tarar, who claimed the vaccines were ruined because of “departmental conflicts”.

“It appears that one person was switching off the generator when it was turned on apparently to save fuel,” she said.

Whatever the cause, it all boils down to the extreme incompetence that is prevalent in all sectors of the government, and such a loss greatly impacts the lives of many underprivileged members of society, resulting in a fatal catastrophe.

This marks the most recent episode in Pakistan’s poorly run public health services. The ruined vaccines were pentavalent vaccines, which combine different vaccines in one injection and are supposed to protect children against five diseases that cause meningitis and pneumonia. All the aforementioned are treatable diseases that only turn fatal without proper treatment.

According to UNICEF, one in 10 Pakistani children does not survive their fifth birthday, and the majority of deaths are due to easily treatable diseases. The very least that can be expected of our government is the safeguard and effective utilisation of the free aid that is placed on a golden platter for them.

A polio team was attacked a couple of days ago in Bajaur Agency’s Nawagai Tehsil, killing one worker and leaving another injured. This attack comes a day after two lady health workers and a policeman were shot dead in Mansehra. Accounting for more than 90% of global polio cases, the rise in the disease directly mirrors the government’s multifaceted failures. Insufficient security has not only stunted health care progress, but marred it with the blood of many innocents.

However, blaming the epidemic on militancy is too simplistic.

Despite multiple supplementary immunisation campaigns, if one were to look into the majority of confirmed polio cases identified in Punjab, Sindh and Khyber Pakhtunkhwa provinces in 2013, they were from zones considered low-violence areas. This stands in strong contradiction to the notion of militancy being the driving force behind its rise.

Lack of accurate polio vaccination coverage estimates, issues of poor sanitation and unaccountability of responsible officials in areas unaffected are quickly swept under the rug to conceal the corruption and basic ineptness existing within our infrastructure.

Moreover, due to the misinterpretation of religious beliefs and basic illiteracy, the government has also failed in educating the masses properly against the risks of diseases, which is highly essential in the curtailment of the epidemic. The measles outbreak in 2012 which claimed 306 deaths and the horrific case of children with thalassemia contracting diseases after they received a transfusion of infected blood, blatantly reinforce our shortcomings.

With a negligible percentage of the GDP allotted to health care, growing medical malpractice is another facet which is crumbling the fragile health infrastructure.

My sister broke her arm at the age of 10 and was slowly recovering having been told that she would not require surgery but needed to ensure her bones remained intact in the plaster. Having gone for a regular plaster change, the doctor took her and told my parents to wait outside. An hour slowly trickled by, followed by a couple more. Meanwhile my parents obviously created a ruckus as a plaster change does not require so much time.

The doctor finally brought my sister out in a wheelchair, half drugged and delirious. My parents nearly collapsed to the floor seeing her condition and demanded an explanation. The doctor, without a semblance of shame, informed them that he had performed surgery on her, and mind you it was an experimental one, which had never been done before. He had drilled holes in her bones and stitched them together inside using some wire that still causes her intense discomfort when the weather changes. When questioned about not having informed my parents, he simply retorted,

“You looked worried enough; we didn’t want to add to it”.

The incredulousness that ensued is a different story on its own, but at the end, no one was held accountable and my sister was left with big scars on her arms and sewed up bones when she all she had gone in for was a plaster change. Given the frequency and rise of malpractice, we were fortunate for her to have come out of it alive, but there are hundreds of cases in which families have lost their members due to basic criminal negligence. There is no law in Pakistan for private hospitals; a license is required to open a pharmacy, but no permission or license is needed to open a hospital.

The appalling state of the country reaches new heights every day with such atrocities running asunder. The government should feel ashamed of their extreme inability to provide its people with their basic rights. Instead, all their capabilities are vested in making everything a personal money-making business.

There is a dire need to develop a system where the negligence, issues of probability and errors can be recognised and the accused can be identified, accounted for, condemned and penalised. Millions of children could have been treated with the vaccines wasted. Millions, who will now never get the necessary treatment and those who will seek it, will not be able to pay for the expensive vaccines.

Human error is one thing, but repeated conscious negligence with absolutely no shame, empathy or remorse is inhumane.