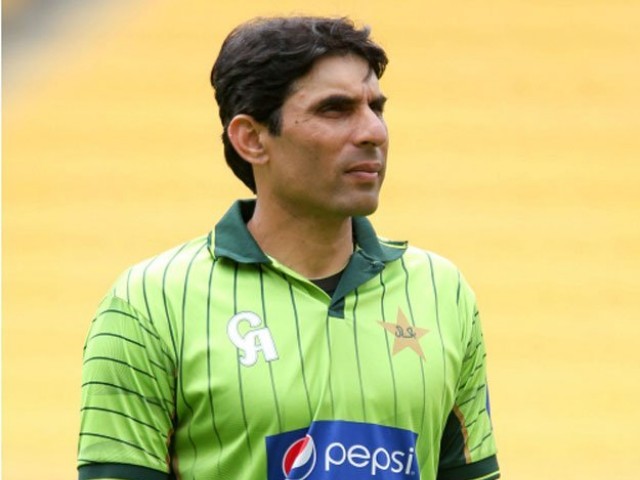 Captaining Pakistan is one of the toughest jobs: Misbah. PHOTO: AFP

A few days ago, I read a blog by a passionate Misbahul Haq fan, thanking the Pakistan captain for all that he has achieved, and asking his forgiveness on behalf of the fans who have harangued and disrespected him for so long.

Like almost all other reflections on Misbah, this one described him by describing Shahid Afridi first, and explaining that Misbah was all that Lala is not. When I asked some Misbah fans why he is not contextualised in Pakistani society the way Afridi is, someone answered that it is because honest and hardworking people never get anywhere in Pakistan.

To me, that felt like a fundamental misunderstanding of both Misbah and Pakistan. Allow me to explain.

The person I fell in love with is a doctor who has worked a lot with state-run hospitals, and it is in places like those that I saw the sort of heroes that Misbah can often embody. The hand-wringing about what Pakistan’s batting will do without Misbah feels like a benign version of the despair you feel when you wonder what the sick and the poor will do without the volunteer-run ambulance services, without the nurses and orderlies who offer services beyond their brief, without the doctors who pay for medicines out of their own pockets.

Of course, there are untold stories of cruel corruption in those places too, but one really has to be there to appreciate the quiet nobility and heroism of those who somehow prevent chaos from breaking out.

But even here, we recognise the value of such people in the absence of destruction. We remind ourselves that given the lack of resources and commitment, everything that these heroes pull off is to be celebrated, no matter how insignificant.

But as noble as Misbah is, he plays a game rather than saving lives. And one of the many advantages of games is that there are far more opportunities to turn the tide. For Misbah, this opportunity arose in the most Pakistani way possible, from the loss of all his opportunities.

Coming in to this tournament, the captain whose reign was already suffering from no home cricket and its finest talents banned for fixing, also lost the best-ranked bowler in the world, the best-ranked all-rounder, his best fast bowler, and then some of his back-ups as well. To compound matters, his team stumbled to two demoralising losses, and Misbah the batsman kept withdrawing further into his well-padded shell.

The moment that the recovery crystallised is when his team, which had just put in one of the worst batting displays by any professional side, had to defend a paltry total to stay in a World Cup that was just getting started. The opposition had lost some early wickets, but their best batsmen were getting settled. Instead of easing off and letting the game drift, the much-maligned ‘tuk tuk’ went for the kill.

Unlike Misbah the batsman, Misbah the captain chose not to wait before attacking. He just went for it. In came Muhammad Irfan for a second spell, and up went a skier from Hamilton Masakadza. In terms of iconic catches, it ranked right up there with Afridi versus New Zealand in the 2009 World T20. As Misbah poked out his tongue, he wore the look of the gambler who could not believe his bluff had gone through.

Misbah’s revolutionary side is seen in the way he has handled his pace bowlers. Photo: AFP

From that moment on, Misbah has never stopped attacking on the field. There is no doubt that Waqar Younis is a magician when it comes to coaching bowlers, and there cannot be enough praise for how well Irfan, Sohail Khan, Rahat Ali and Wahab have bowled. But there is no doubt in my mind that the key to their effectiveness has been Misbah. Some might claim that he had no other choice when defending 230-odd, but he provided the perfect counter in the Irish innings on Sunday.

Despite Ireland seemingly coasting with a century from their opener, Misbah kept taking the opposition on. The slips were the most eye-catching of several smart field placings, but consistently the best feature of Misbah’s captaincy of late have been the bowling changes.

For once we can celebrate his courageous captaincy without indulging in what ifs. Photo: ICC

Against Ireland, it was the decision to bring in the part-timer after the main bowlers had managed to frustrate but not dismiss the batsmen. Against Zimbabwe, it was the introduction of Irfan and then Wahab in their second spells that broke the back of the chase. Against South Africa, where Misbah’s gambler persona had acquired the suaveness of George Clooney in Vegas, his most inspired decision was to bring back his most expensive bowler against a rampaging AB de Villiers. You know what happened next.

In a weird way, losing the main components of his team’s only strength has seemed to free Misbah. Not since the Bastille has a liberation been so revolutionary. Where the quality of Saeed Ajmal and the stubbornness of Afridi and Mohammad Hafeez often led to Misbah taking a back seat, with tactics often telegraphed, handling a battery of pace bowlers has brought out a rarely seen side to him.

I also feel this change is revealing of Misbah’s little-understood character. As a batsman, he often seems to (justifiably) lack trust in his partners, and puts too much pressure on himself to deliver. As a captain who cannot bowl, his famed cricketing brain is free to indulge itself without having to depend on delivering himself. Moreover, it has also allowed him to invest a lot of trust in his bowlers, which has worked wonders. No one embodies that better than Wahab, who has transformed into a gigantic guitar solo of a bowler.

I wish Misbah did not have to face the vitriol he has suffered in his career, but I also feel that there could have been few endings more poetic and wonderful than the one we are witnessing. For once, the description of Misbah does not have to be a mournful what if, but rather an ecstatic celebration of courageous captaincy.

And in his story, which will now last into the knockout stages, there is also a ray of hope for my beleaguered country, which suffered a horrifying attack on the Christian community while the Ireland game went on. Many of us have grown tired of constantly having to display resilience, and to brave violence and injustice. But as Misbah’s career shows, if we can last through the dark periods, then we will surprise ourselves with how much we can achieve.

A final thought – it was another moment to remember, and say a quiet prayer for, Bob Woolmer. Thank you, Bob.