Christening our Muslim land with blood 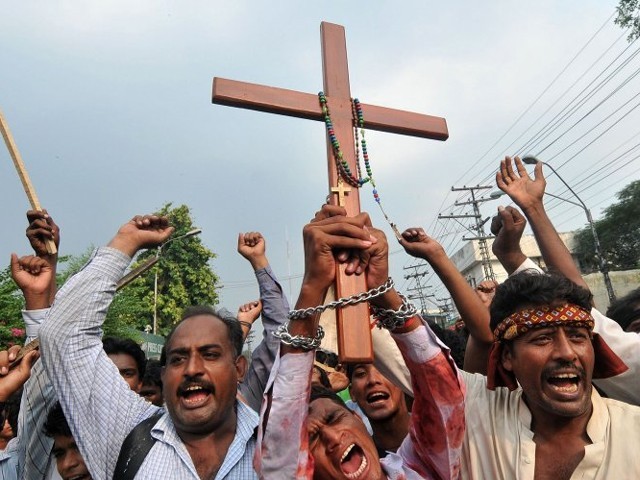 Whenever a Christian is persecuted in a Muslim land, this sacred covenant is broken. PHOTO: AFP

Five years ago, I lost close friends in one of the most gruesome terrorist attacks on Pakistani soil. In twin attacks on two major Ahmadi places of worship in Lahore, 88 worshippers were martyred by the Taliban. It was a painfully bloody day. This weekend, I woke up to sad news from Pakistan that made me relive some of that pain.

Fourteen worshipers were martyred and more than 70 were injured when two Taliban suicide bombers blew themselves up outside churches in Youhanabad, Lahore.

These attacks on Pakistan’s Christian community are not a sporadic event. They are a part of a very tragic trend. Just over a year ago, another suicide attack at a Peshawar church claimed 78 lives. Not long before this, an angry mob torched over a 150 houses in Lahore’s Joseph Colony following blasphemy allegations against a Christian man. Another Christian couple – Shama and Shahzad – were recently lynched and burnt alive in a kiln on similar blasphemy charges. As in the Joseph Colony rampage, this mob violence was also led by a local cleric.

While our minority communities are frequently attacked by religious extremists – radical Mullahs and the Taliban – the state does very little to protect them. Even in the rare instance that the perpetrators of such attacks are caught alive, they get away with a mere slap on the wrist. The Punjab government is especially notorious in sponsoring hate against minority communities in an attempt to appease extremist elements that serve their vote bank. In fact, we now know that the Punjab Government under Mr Shahbaz Sharif shamelessly carried out negotiations with al Qaeda, impressing on the terrorist group about their and the Sharif party’s shared goals in Punjab.

The reaction from the masses is not very encouraging either. The majority continue to remain apathetic to the on-going persecution of our minorities. They refuse to understand that standing up for them is a sacred duty entrusted upon us by our faith.

Islam repeatedly mandates that we protect our minority communities. One of the few times the Holy Quran permits fighting is to uphold religious freedom – including that of our fellow Christians, Jews etcetera – with specific mention of the protection of churches and synagogues. Extremists who act to destroy these places of worship act in complete opposition to the Quran.

Prophet Muhammad (pbuh) expressed great contempt for a Muslim who mistreats a non-Muslim. He warned Muslims against treating non-Muslims unfairly, challenging their rights or even taking something from them without their consent. And whoever did so would be equal to being Prophet Muhammad’s (pbuh) opponent on the Day of Judgement.

What a strong warning!

It is well known that Islam equates the killing of one person to the killing of all humanity. In addition to this generic prohibition of murder, Prophet Muhammad (pbuh) is reported to have specifically forbidden paradise to those who hurt non-Muslims. He cautioned against killing a non-Muslim under Muslim rule, and that the murderer of non-Muslims would be forbidden to enter paradise.

Yet, in their own perverted understanding of jihad, extremists act against these clear injunctions of Islam. Even Muslims from minority sects are not spared of their wrath. Pakistani Muslims must stand up to this on-going injustice and extremism. We must stand in solidarity with our Christian community, just as Prophet Muhammad (pbuh) stood by all Christians for all times to come.

In his covenant to the Christian monks of Saint Catherine’s Monastery, he declared:

“Christians are my citizens, and by God, I hold out against anything that displeases them. No compulsion is to be on them. Neither are their judges to be removed from their jobs nor their monks from their monasteries. No one is to destroy a house of their religion, to damage it, or to carry anything from it to the Muslims’ houses. The Muslims are to fight for them. If a female Christian is married to a Muslim, it is not to take place without her approval. She is not to be prevented from visiting her church to pray. Their churches are to be respected. No one of the Muslims is to disobey this covenant till the Last Day.”

He clearly warned in the covenant that,

“Whosoever shall annul any one of these decrees, let him know positively that he annuls the ordinance of God.”

Whenever a Christian is persecuted in a Muslim land, this sacred covenant is broken. Those who willingly remain silent on this on-going persecution contend with such violations of God’s ordinance. In this regard, Pakistan, an ‘Islamic republic’, has an added obligation to lead by example. If it claims to be the slightest bit Islamic, it has to raise itself to these basic standards of Islam. The government must protect our Christians and stop trying to make under-the-table deals with those who seek them harm.

As for Pakistan’s silent majority, how many more times will you witness the covenant of God being trampled before you finally speak up?