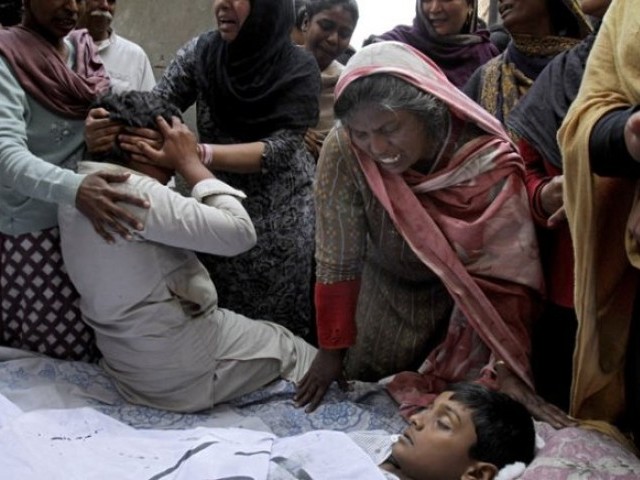 A Pakistani Christian family mourn over the lifeless body of a boy who was killed from the suicide bombing in Lahore on Sunday. PHOTO: AP

One wonders if the National Action Plan (NAP) was actually implemented beyond the Punjab police’s wide arrests of clerics who tried using loudspeakers. After all, Maulana Abdul Aziz and his devotedly-radical wife Umm-e-Hassan still use a state-recognised mosque to propagate a narrative that insists the actions of groups like ISIS or the Afghan Taliban are all justified – commendable even.

Add this to the fact that the most high-profile raid to happen in mainstream news recently was not a madrassah sending jihadists to Kashmir or a mosque being operated by the rabidly anti-Shia Ahle Sunnat Wal Jamaat (ASWJ) (which still holds protests without the fear of being rebuked as violently as farmers in Okara), but the office of a popular, secular-rooted political party notorious for not being exactly law-abiding. Meanwhile, all the hate speech and weapons proliferation can continue on in centres where religion is the guiding force rather than just ethnicity.

The culmination of all that doubt in our government’s (and our military’s) enthusiasm to tackle terrorism were the church blasts in Lahore yesterday which, as non-Sunni places of worship, were supposed to have been given extra police-attention. Alas, like every other regular guy, the security guards in charge were too preoccupied cheering for Pakistan in its match-up against Ireland in a nearby teashop.

If that isn’t plain revolting, the reaction certainly makes it far worse.

While cricket enthusiasts continued on watching their match, just glad that it wasn’t in the Cantonment, the media proved which side it was on. By reminding television viewers that Christian protestors were carrying a nationwide protest and associating it with images of carts burning, the media ensured that the public would start equating the Christian community’s response to a terrorist bombing to the bombers themselves.

And then there’s Imran Khan and his bandwagon of followers chiming in, accusing the Punjab government of a security lapse and coming out with a statement that, as usual, condemns the incident but never names the perpetrators. Anyone who has a reasonable ability to recollect can remember the great and consistent security lapses made by the Khyber-Pakhtunkhwa (K-P) government, with the Peshawar school attack, the imambargah attack and last year’s church bombing acting as plain indicators of the hypocrisy political personalities like Imran Khan have always embodied.

For all the NAP’s effectiveness in coming out with statements to appease the international world with claims of banning terrorist organisations, Pakistan’s government hasn’t moved an inch towards recognising the threat of militancy.

The only figure who has, Jibran Nasir, isn’t even part of the political framework; he can’t make decisions that count. The ones who do count, like the interior minister who claimed that Aziz had apologised for his insensitive remarks after the Peshawar attack – a claim that Aziz immediately refuted – are too busy trying to explain to the world that “Islam is a peaceful religion and terrorist groups do not represent Islam”, as if all it takes to beat radical Islam is that essential clarification by Chaudhry Nisar.

All these claims and all these deliberations that insist on representing terrorism as a war being ‘imposed’ on Pakistan’s people and refusing to deal with the root problems have had a cost. It has detached everyone from the reality of radical Islam posing a significant threat to Jinnah’s Pakistan. It has killed thousands of Pakistanis, even before American involvement in the region.

Above all, it has made us indifferent to incidents like yesterday’s church blasts, where 14 murdered human beings simply became a numerical addition to a much bigger death toll.

Dear politicians, is this really the right time to discuss politics?