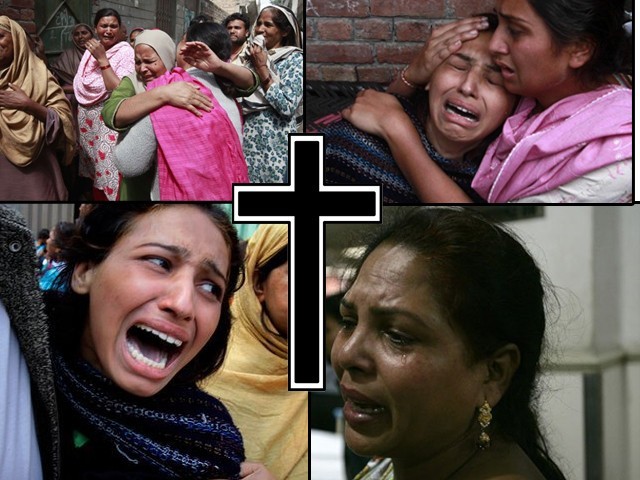 Is this incident not enough to create panic amongst the public? PHOTOS: AFP/REUTERS

The minority communities in Pakistan have been facing immense threats to their lives and the recent bombing on the church in Lahore is yet another gruesome manifestation of the extreme form of religious bigotry which threatens the existence of minorities in Pakistan.

Yesterday, a church in Youhanabad, a neighbourhood of Lahore, was hit by two suicide attacks, leaving 14 dead and over 70 injured. But the question is: is terrorism only external or has it deeply penetrated into the national and social psyche?

We all rightly protest whenever minorities are targeted, be it the beginning of last year when a suicide attack was carried out on a bus carrying Shia pilgrims in Quetta, the suicide attack on the All Saints Church in Peshawar in September 2013 in which 85 innocent souls lost their lives, the Shikarpur attack, the attack on the Ahmadi worshippers in Lahore, or when a Christian couple was burnt alive in Radha Krishan Colony by an angry mob over the allegations of blasphemy and many others.

A similar, highly disturbing incident of callousness and barbarism occurred after the attack on the church in Lahore yesterday, when vigilantes burnt two men to death after heavily torturing them, suspecting them to be involved in the attack.

The police, as always, did not show any competence or responsibility to prevent such a gory act from happening and the entire humanity is buried in shame, yet again, over such a brutal massacre of two souls, who appear to be innocent. Even if they were guilty, no one should be lynched without due process of law. Does rule of law even exist or is it a farce like democracy, freedom, equality, non-discrimination and so many other glossy words which don’t seem to exist or have relevance in a country where the law of jungle is in place?

Where does the blame fall?

Not only have all institutions and the leadership, at each and every level, failed, humanity has failed and surrendered in front of the bigotry, hatred and extremism which has plagued, overshadowed and completely hypnotised us into blind savagery. When justice is not being dispensed, human protection is not ensured. Firing 28 bullets into the body of a sitting governor over a blasphemy allegation, in broad daylight, is not considered as falling under “terrorism” provisions of the anti-terrorism legislation for its failure to pass the threshold of creating panic in the public.

With incompetency of law enforcement officials and the impunity given at large to culprits who, in large groups, shed human blood publically with a common cause by being ‘the victims’, ‘the provoked’, ‘the police’, ‘the judges’ and ‘the executioners’, such incidents will inevitably become a commonplace and should not shock the public.

Just as we forgot the two brothers Muneeb and Mugheez Butt, who were brutally murdered in presence of police officials in Sialkot, despite the video of the horrific incident being shared everywhere on social media and some of us losing sleep and feeling cautious for weeks, or the case of Shama and Shahzad, where we changed our display pictures to share our grief as responsible citizens who felt the pain of  victims of the same mob violence, we will forget this one too.

Women are paraded naked in streets to avenge their brothers violating the ‘honour’ of another family by getting involved with a woman from a prestigious tribe, petty robbers are burnt alive in streets while the sophisticated and bigger thieves sit in parliaments and any incriminating evidence against them “disappears” from the face of planet. It is the weak to whom the law of the jungle applies. The vulnerable, the helpless, those who happen to be at the wrong place at the wrong time, with the wrong appearance; they are the ones deemed as the culprits, the accused, the condemned and, eventually, they are the unheard – under this law of the jungle.

Is this incident not enough to create panic amongst the public?

Can we expect this case, and all other similar ones including that of Shama and Shahzad, to be tried under the Anti-Terrorism Act (ATA) provisions and the culprits be punished as per the law so that no one dares to take the law in their own hands in the future?

If not, then do we even have an independent and impartial system of justice in place or is justice also a selective term which is a privilege to be given to only a few, a discretion and prerogative in the hands of our honourable judges? What good is the sacred constitution then, which is supposed to be the holy book on judicial interpretations, for the dispensation of justice and disposing of judicial matters? Is the chapter of fundamental rights, the provisions on the due process of law and fair trial, redundant?

Are we all not treacherous to the constitution of the Islamic Republic of Pakistan? Have we not butchered it every now and then to suit our agendas and thought process?

When will this brutality end? Will the perpetrators ever get punished? Will we ever have a strategy to prevent such incidents in future? Will any public authority ever take responsibility or act with competence when confronted with such instances?

Will our institutions ever function and perform effectively?

How much more innocent blood will we shed? When will human life be valued in this country? When will we breathe an air of security and freedom?

And above all, will we ever get answers to these questions and many others?