#NineZeroRaid: Why is MQM the only one being targeted? 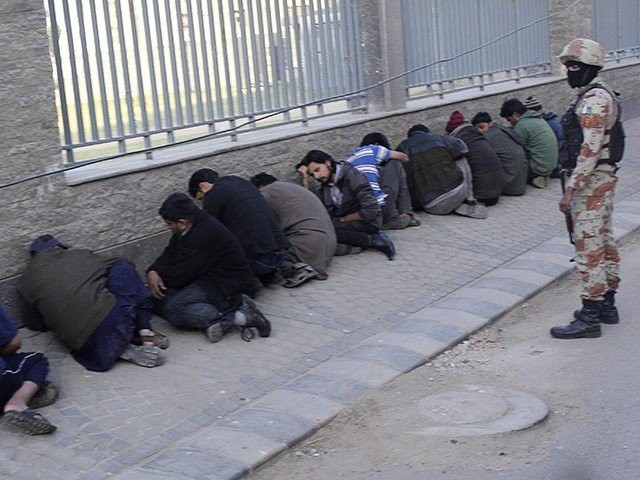 The early morning raid at Nine-Zero, the headquarters of Muttahida Qaumi Movement (MQM) has raised a series of questions. On one hand, it seemed like a well-coordinated search operation carried out reportedly upon a tip off by the intelligence agencies, while at the same time, the timing of the raid right after the Senate elections and especially when MQM, Pakistan Peoples Party (PPP) and Pakistan Muslim League-Nawaz (PML-N) had apparently turned over a new leaf, gives credence to some political back channel arm twisting either by PML-N or the ruling party in Sindh, PPP.

Such serious actions are usually taken when either there is a series of events that build up and take the form of a grand operation or there is a political objective to achieve by displaying of power and authority.

Could this be yet another attempt on part of the PPP to force MQM back into the ruling coalition setup?

Could this be a message from the armed forces of Pakistan or is it purely on merit and part of the on-going operation in the city?

If that is the case, then why only MQM?

Why haven’t the law enforcement agencies (LEAs) been able to remove barriers near Bilawal House and carry out a similar operation within and outside the PPP headquarters in search of the Lyari gangsters who are still in hiding? Or any such operation in Punjab for that matter?

If the government and the LEAs are committed towards improving the law and order situation in Karachi and want to put all criminals behind bars, why is Uzair Baloch still in Dubai? Why are delay tactics being used to keep him away from Pakistan? Which PPP leaders are reluctant in letting him return in order to keep certain information classified? If MQM was protecting terrorists, then who in the Sindh government is protecting a hardened criminal like Uzair Baloch?

Areas like Sohrab Goth, Kunwari Colony, Lyari are no-go areas for LEAs. They have to seek permission before carrying out raids in certain neighbourhoods within these areas and if not permitted, they cannot even enter. Internally Displaced Persons (IDPs) from Waziristan and Afghan refugees are well-stocked with assault rifles, RPGs, missiles, etcetera and yet they enjoy full waiver from LEAs and strike with impunity whenever and wherever they wish to operate from. We do not witness any grand scale operations in their strong holds or any recovery of illegal weapons. Even a party like Jamaat-e-Islami (JI), which has been exposed several times in the past for providing shelter to high profile al Qaeda operatives and leaders, is enjoying good relations with LEAs and therefore stays among the untouchables of the society.

When it comes down to religion-centric terrorism, we are yet to witness the arrest and hanging of someone on sectarian grounds. Mumtaz Qadri is being praised by the lawyers’ community as mard-e-momin while speedy justice seems to be a distant dream for the family of late Punjab governor Salman Taseer. Abdul Aziz is a free man despite his fiery speeches, direct links with the Taliban and recovery of gas masks, assault rifles of prohibited bore etcetera found in his compound. He is probably on good terms with the “establishment” and therefore enjoys complete immunity.

Who exactly is calling the shots then?

Is it the federal government, the Sindh government or the armed forces of Pakistan?

The answer to this question will never come to the lime light. More innocents will die and Karachi will continue to burn as long as double standards prevail and an across-the-board operation is not ensured.