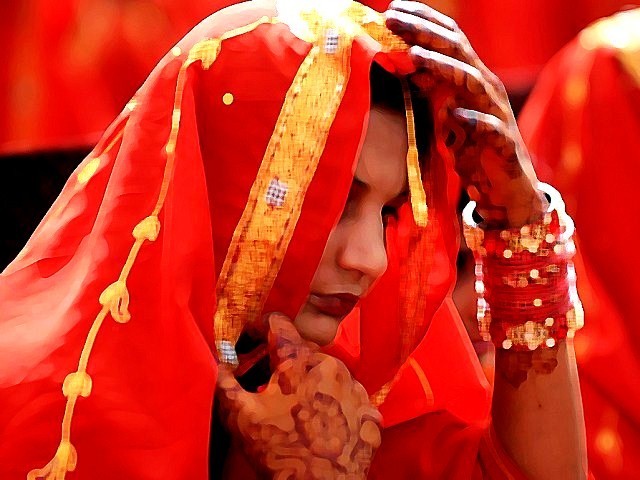 Unfortunately, this law is not in accordance with international commitments or the spirit of the UN Convention on the Rights of Children and those rights given by the Constitution of Pakistan. PHOTO: AFP

Justice Muhammad Imman Ali has served in the Supreme Court of Bangladesh as well as other high ranking positions as a law practitioner.

He is famous for his work on child rights; he has drafted the much known comprehensive law Shishu Ain 2013 Children Act in Bangladesh, and has played a vital role in promulgation of the same. In December 2014, he received the International Juvenile Justice without Borders Award for his untiring efforts towards the protection of children’s rights and juvenile justice.

A source of inspiration for me, Honourable Justice Imman Ali has articulated very clearly that the two problems – child marriages and poverty – are closely interlinked.

Thus he has called this menace a vicious circle of poverty in his country, while very strongly advocating the issue of child marriages. In a lecture, he said,

“Child marriage is disastrous not only for the wellbeing of the wedded girls but also for the country. Young brides are exposed to physical and sexual abuse, endure high-risk pregnancies, and are denied access to school or job training”.

In the Indo-Pak subcontinent, during 1929, the Child Marriages Restraint Act was introduced. The law was drafted by the legendary lawyer, Quaid-e-Azam Muhammad Ali Jinnah. What’s interesting to note here is that both great leaders of that time, Mr Jinnah and Mahatama Gandhi, got married when they were children themselves and later on both these leaders opposed the tradition of child marriages.

In terms of legislation, very little has been done on this front ever since.

In 2014, the Sindh Assembly promulgated the Sindh Child Marriages Restraint Act 2013, against child marriages in the province. Although, the law intends to protect the rights of children according to the commitment Pakistan has made by ratification of United Nation’s Convention on the Rights of Children, I think there is a need of a more comprehensive law as this act remains silent about the rehabilitation and recovery mechanisms for those who have already fallen prey to this epidemic.

Nonetheless, this law is a much better version, as compared to its counterpart in Punjab.

I recently read in the newspapers that the Punjab Assembly has also passed a law against child marriages – and it got the bill passed in the absence of any opposition and without bringing it into any debate whatsoever. Strange.

The fact that our policy-makers thought about this issue and passed this bill should be appreciated, yes, but I am just surprised that, either intentionally or unintentionally, they have removed the word ‘child’ from the title of this bill. It now reads as the Punjab Marriage Restraint Act 2015. How would the law be significant is such an important component of the bill is not highlighted?

This step is beyond my understanding.

Furthermore, this law is not in accordance with international commitments or the spirit of the UN Convention on the Rights of Children or the rights that are given by the Constitution of Pakistan.

The definition that has been given in Section 2(a) of the act, regarding who exactly is a child, is flawed. According to it, a female person is a child if she is less than 16-years-old and a male is a child if he is less than 18-years-old – which is discriminatory and is against the Constitution. Such discriminatory laws on the basis of gender should not be enacted in our legal framework.

On the other hand, the definitions it provides in Section 2(d) regarding the term ‘minor’ contradicts the above mentioned clause.

This new law in Punjab does not make the offence cognisable, non-compoundable or non-bailable, and the complain process through the union council is still the same – lengthy and inept. This law is unable to effectively serve its purpose and put an end to child marriages, due to the legal complications it poses. These complications often make it hard for the victim to file their complaints or for the police to work efficiently.

The Punjab legislature could have taken a leaf out of Sindh’s Child Marriages Restraint Act 2013; this law makes the offences cognisable, non-bailable and non-compoundable. Comparatively, the bill clearly defines punishment to the culprits for three years (maximum) and two years (minimum) while giving discretionary powers to the judges regarding the fine charged. Whereas in Punjab, the punishment  “may extend” to  imprisonment  for a period of maximum six months and a fine of maximum Rs50,000 only, while the minimum limit is the judge’s discretion.

I feel that, since the situation of child rights is already pathetic in the province of Punjab, and the reporting process of child marriages to the police is incompetent, the government should have given this law more thought and should have passed a more comprehensive bill. While we have different NGOs that have shared disturbing data regarding child marriages, we rarely find any FIRs or cases registered with the police under this crime, and till now, the conviction rate for child marriages is almost zero. This is because the issue is not taken seriously at all by policy makers and has much acceptance in our rural society.

A few days ago, I attended a program in the Lodhran District of Multan, where a friend of mine – a lawyer who is pursuing a case of child sexual abuse – shared a heinous incident that is directly associated with child marriages. A 12-year-old girl was first raped by some close family friend and when the rape was disclosed – as the child got pregnant – a case for child sexual abuse was filed to the police and taken to court.

However, the relatives of the perpetrator were able to bribe a nikkah registrar to forge a nikkahnama of a previous date and they presented that as evidence, posing that the child was in fact the perpetrator’s wife. Fortunately, due to an able and effective prosecution, the perpetrator was convicted for his crime nonetheless and the forgery was later discovered as well.

In recent years, medical experts have reported hundreds of cases of fistula in Pakistani women. This is a disease that occurs due to child birth, usually in 12 to 13-year-old girls who get married early and have children at a dangerously young age. Now, in this situation, if legislatures pass a bill not in accordance to international standards and does not ensure the best interest of children, then it highlights a lack of political wisdom in our politicians towards child rights.

We have quite capable jurists and legal experts; I experienced this fact a few weeks ago, when I attended a national conference against child marriages by the Democratic Commission for Human Development. In a very impactful and issue-oriented session, all stakeholders, including religious scholars, agreed to the agenda of Bachpan Bachao.

During a conference called the Alliance against Child Marriages in Punjab, a group of civil society organisations from the province shared the draft of a better and more well-rounded bill with the participants. It not only addressed the issue but also provided the mechanism for the recovery and rehabilitation to the victims of child marriages.

If we want to survive as a nation, our children need to come first. Our policy makers, legislatures and jurists will have to follow the thoughts of Justice Imman Ali. Otherwise, we shall not be able to break this ‘vicious circle’ of child abuse and poverty, and more children would fall prey to this foul practice.

Child rights activist and law practitioner in Lahore, he tweets as @miqdadnaqvi (twitter.com/miqdadnaqvi)

Sughra died when she was 11, but she will not rest in peace