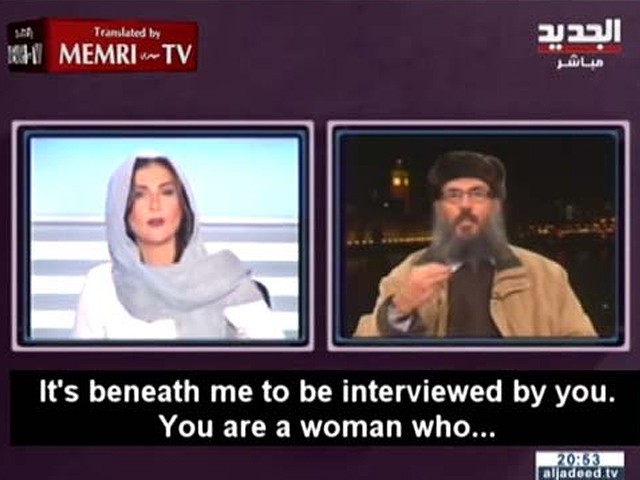 He was being interviewed by a professional who had her basic concepts on moderation just right. PHOTO: YOUTUBE

That was my first reaction when I came across a certain incident making waves on social media, catching the attention of people globally. A gutsy Lebanese female TV host, Rima Karaki, strong-armed her guest, London-based Muslim scholar Hani Al Seba’I, live on air after he told her that it was beneath him to be interviewed by a woman.

Being a TV presenter myself, I am very well aware of the fact that no anchor enjoys giving their guest a shut up call. Talk-show hosts are often bound by respect and obligation for their guests because of personal affiliations. It also takes a lot of effort from producers to line up guests to appear on these shows – most of which are planned at the last minute due to the ever changing world we live in.

When I discovered this video making waves on social media, I felt I needed to see what all the fuss was about. While many rejected it as a waste of time and ‘just another headline about a woman raising her voice against suppression’, I believe this incident deserves all the attention it is getting.

Karaki’s action in this case exhibits lessons and reminders for all of us who claim to be active members of civilised societies the world over. She not only provides commentary on how far behind the world still stands on certain issues of liberty, empowerment and emancipation but at the same time raises many questions that we still haven’t been able to answer, regardless of the progress we might claim to have made.

Part of the blame has to be borne by media for the insult the scholar subjected Rima to. Around 60% of the feedback that TV personalities receive, irrespective of sex, is all about how they look, which is often the criterion for hiring faces. Glamour quotient subjugates content in the ratings driven TV industry and that eventually contributes to audiences just going after how pretty or handsome the presenters look – little intellect is expected from a talking head.

The scholar, however, was in for a few shocks of his own from Rima. He was being interviewed by a professional who had her basic concepts on moderation just right. She stays on topic and asks her guest to stay on topic too. It isn’t all that difficult to understand his reaction in the situation he found himself in. She was a woman to begin with and that too with brains. She was questioning him and instructing him on what to say and how to say it. She prompted him to blurt out something that highlights the complex problems of our social behaviours.

Al Seba’I should have been mindful of his responsibility of portraying his Islamic thought as a teacher and scholar but sadly, he ended up successfully projecting the wrong image like so many others. Religion does not apply everywhere – if he believes that women should not be on TV or amongst men, then that’s his perception. It should not be forced upon others. I do not want to get into the religion debate here but there is often little value added to discussions about social issues by clerics when they are invited to such discussions here at home. Rigidity often does not let the thought process flow smoothly.

Just because it was a woman hosting the show, did he think he could talk down to her and she would take it?

Society has changed and personalities such as Al Seba’I need to realise and accept that.

Times are changing and women are stronger and more vocal now. They might not have all the rights due to them, but if push comes to shove, they are ready to fight for and even snatch their due rights if required. Rima proves that respect is mutual and works both ways, and I applaud her for her strong stance. It should be the basis of all human interactions, men or women.