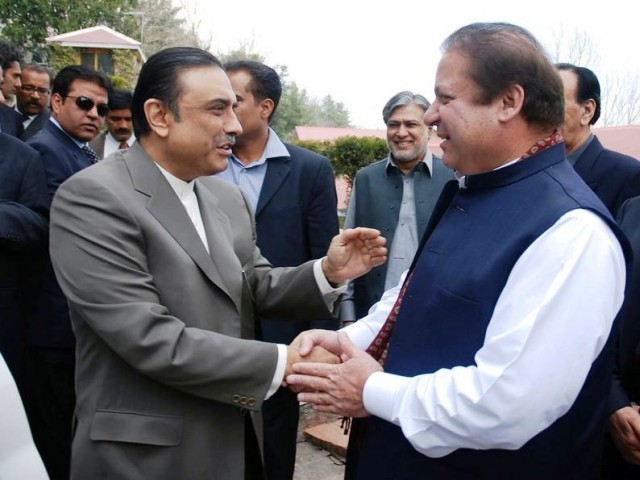 Charters, declarations and politics of reconciliation - why can't our politician make it work?

Former Prime Minister Nawaz Sharif has issued a statement asking the nation’s politicians, judiciary and the military to create a 25-year plan, which he called the Charter of Pakistan. The plan, he said, should be produced “with consensus” to pull Pakistan “out of its problems.”

Our politicians are just discovering what statesmen in other nations take for granted. Better late than never.

There is no reason to doubt Mr. Sharif’s sincerity in floating this idea. But he should also ponder with an open mind what many skeptical Pakistanis will say about it. Seen from another context, this noble idea can easily turn into 25 more years of the same tested, tried and failed politics in Pakistan. Put more bluntly: another lease on life for the dying Pakistani political elite.

The problem with consensus

The keyword in Mr. Sharif’s proposal is consensus.

If Pakistan had concentrated on indoctrinating its citizens, the way Israel, China and the United States have done with theirs, we could still have had a common ground to start from. But in the present situation, the Pakistani state has allowed shortsighted and failed political parties to wrestle legitimacy from the state’s hands. Now these parties have become the self-appointed sole representatives of entire groups of citizens.

In fact, Pakistanis are not as divided as these parties make them out to be.

Pakistanis have also watched with horror over the past three years as the respective leaders of the two parties came dangerously close to provincialism. President Zardari indirectly threatened to use the so-called Sindh card if his government was toppled. (He rejected the idea altogether when asked about it, but actions speak louder than words). On the Pakistan Muslim League’s side, this is ironically also true in the case of Mr. Sharif’s faction, since the other faction, the PML-Q, remains better represented nationally across Sindh, Kashmir, Balochistan, Punjab, Khyber-Pakhtunkhwa, and Baltistan.

Most of the existing parties run private and lethally-armed militias and have perfected the art of street chaos and messy or uncivilised politics. They often have nothing to offer their voters, besides a tendency to whip up linguistic differences. This assessment is a harsh reality. Best of all, there is no law – yet – to stop these parties from perpetuating this flawed concept of how political parties should behave internally and in public.

There is no tradition for planning in almost all of the major parties. Membership and career path within the parties depend on loyalty to a permanent, lifelong party chief.

So it’s more like a modern form of a medieval tribe than a modern political party. There are isolated bright exceptions of some politicians succeeding in taking out party ‘planning documents’. Senator Mushahid Hussain Syed of PML-Q is a case in point and he has taken this talent with him to the Senate Foreign Relations Committee, where he supervised the release of elegant and meaningful policy planning documents. But his talent remains confined to his person and has not rubbed off on the wider political culture in his or in other parties. Planning for the future – let alone for 25 years – remains limited to a lousy collection of bullet-points and generalised essay-writing.

It is impossible to create consensus on anything in this fragmented, violent and shallow political environment. Moreover, in some cases, a state needs to impose discipline and not wait for it to develop. In the west, for example, discipline within a democratic system of governance evolved over centuries, not decades. The process included wars, famines, genocide, redrawing of borders, ethnic cleansing, and more wars. We in Pakistan can’t wait for due process to take its course. Israel is not the best of examples here for political reasons, but even now there are many interpretations among Israelis for what Israeli history should be and what type of modern state Israel should be. The debate goes on, but only one interpretation for Israel’s history is enforced from top to bottom. And it was not put to vote, but implemented from the inception of the state in 1948.

In China, Singapore, Malaysia and Dubai, discipline was enforced. No one invited ‘stakeholders’ to sit down and develop consensus, except in very narrow circles. Even in a mature democracy like the United States, a president went to war in Iraq, despite half the nation being against it. There was no consensus at all.  In the Gulf region, there is one emirate that is deteriorating on all the vital indicators every year and that is Kuwait. It currently has 38 billion dinars in its savings account, which means around $150 billion dollars, with small geography and a population of less than two million. And yet, the state has been unable to build any major universities and hospitals since the early 1980s. The reason is political instability. An opposition-dominated parliament and a government dominated by the ruling family have been at loggerheads since the introduction of parliamentary democracy in 1961. The United States and the western world hailed the Kuwaiti democracy, with its noisy free press, as a role model for autocratic Saudi Arabia, UAE and Oman-but that was a decade ago. Today, everything is falling apart. In April and October this year, Kuwait’s reforms-minded Emir blasted the parliament and the constitution and blamed them for stalling development.

Forget about consensus in Pakistan. With $150 billion, a tiny land mass and a population of two million, Kuwait has been unable to create a consensus on whether to allow international oil companies into Kuwaiti oilfields, whether to open up the economy or protect it, to build new cities or not…the list is endless. Now the rulers of Qatar, Bahrain, UAE, and Oman laugh at the Kuwaiti democratic experiment. This is ironic, because there was a time when these emirates used to marvel at Kuwaiti social and political freedoms.

This doesn’t mean consensus-building is bad, or that democracy doesn’t work. It still is the best system of governance so far, provided it is adapted to local conditions. In Pakistan, media, social and political freedoms will always exist. But without touching them, the state will have to intervene in the interim and enforce discipline and seize back powers taken away by failed political parties. The state will have to tolerate dissent, but not chaos, mess and violence, even if it’s in the name of democracy.

What is our link to democracy? It is limited to our elite studying it in western universities. When they return to Pakistan to rule, their actions are the opposite of what they have learned. In a society like ours, we don’t have the time or energy to evolve democracy and engage in social, educational and economic development at the same time. You can either get busy with developing a consensus, or with developing the country.

Despite my skepticism, I fully back Mr. Sharif’s idea of building consensus for a 25-year plan for Pakistan. But if the politicians fail to build consensus, will they agree then on the need to step aside, spare us their politics, and let the rest of us force changes into the system to allow new thinking and new faces?