“Using a bazooka to kill a fly”: anti-Islam measures in Europe 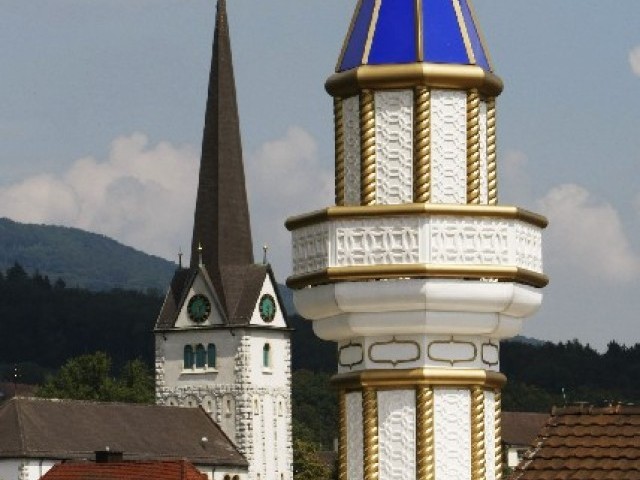 Banning minarets in Switzerland, a country which has only four minarets for its tiny Muslim population, was a ludicrous move.

When an assignment deadline is just round the corner, a reposeful Saturday morning transforms into a feverish study routine. On one such morning, I was heading towards the bus stop to catch the 9:00 am double-decker to my university, when the eerie sound of a vuvuzela stopped me dead in my tracks.

A large group of English Defence League ‘hooligans’ were marching forth in my direction and it was not the annoying vuvuzelas which scared the hell out of me, it was the repugnant message on their placards, which read “All Muslims are terrorists.” As a Muslim, I could only despair at the repulsive notion that all Muslims shared responsibility for such atrocious acts as 9/11 or 7/7. I reassured myself that these displays of hatred are sporadic incidents, but I was wrong.

The rise of obscurantist right-wingers can be observed all over Europe, with varying degrees of influence. However, I hardly expected that a country like Switzerland, which has always shied away from being involved in the UN or EU, would impose a ban on minarets. What was the reason? Martin Baltisser, the Swiss People’s Party (SVP) general secretary, gave the answer: “This was a vote against minarets as symbols of Islamic power.” Switzerland, which is home to 400,000 Muslims, has just four minarets. As a follow up to this preposterous resolution, we can anticipate that SVP will be pressuring the Swiss corporation, New7Wonders Foundation, to exclude the Taj Mahal from the seven wonders list as it ‘glorifies’ Islamic power. Surely, the legend of Shah Jahan and Mumtaz Mahal is a cover up for a secret agenda of the ‘Islamists’.

The banning of minarets had disastrous spillover effects, with France and Belgium also falling in love with the ‘banning’ phenomenon. These developments were an antithesis of the philosophy of French enlightenment writers such as Voltaire and Montesquieu, who advocated civil liberties and freedom of religion. Islamic injunctions may not require a woman to wear burqa, but this ban marginalises women who wear it of their own choice. Far from liberating them, it secludes and alienates them to the refuge of their homes.

I invited Mehdi Hasan, a senior political editor at the New Statesman, for a talk on this issue at the University of Warwick. At the dinner table, Mehdi Hasan mocked Belgium’s decision to ban the niqab and remarked, “Belgium couldn’t agree on a government for six months, but guess what, they took out a day in order to pass a ban on the veil. Do you know how many women wear the veil in Belgium? 215, so few that they can put an exact number on it. I had more people at my wedding than that!”

Reflecting on this very point, Mehdi Hasan sighed, “And when you talk about this issue, right-wing media, like the UK’s Daily Express, label you ‘Islamist’. Imagine, a moderate Muslim, the Chairman of the Cordoba House, Imam Feisal, who wrote the book ‘What’s Right With Islam is What’s Right With America’ is conveniently named a militant.” The slew of high-profile Republicans who have condemned both Imam Feisal and the Cordoba House conveniently ignore the fact that what they are dubbing as ‘Ground Zero mosque’ is not a mosque at all. In fact, it is not even being built on Ground Zero. The proposed site is two blocks to the north. One may remind the Republican Gingrich and his bigoted allies that far from being a desecration, the project aims to promote “integration, tolerance of difference and community cohesion . . . a place where individuals, regardless of their backgrounds, will find a centre of learning, art and culture.”

Regardless of the craven silence of the Democrats on this issue, there have been innumerable individuals who have made sure that their voice is heard amidst the onslaught of blinkered arguments.  New York mayor Michael Bloomberg, in an impassioned speech to his fellow Republicans, argued that Muslims “are as much a part of our city and our country as the people of any faith.” During the ‘Quran burning’ day fiasco, the mayor of Gainesville strongly condemned the bigoted idea. Here in the UK, the Archbishop of Canterbury, Rowan Williams, has been an adamant supporter of the integration of Muslims into British society. The number of locals who turn out to support Muslims in counter-demonstrations usually outnumbers the protestors two to one.

I know and find solace in the fact that the vast majority of people in the western world are decent and stand for universal values of tolerance and freedom of religion. Indeed, the important facet of Islam – to treat minorities equally – is more widespread in the West than in many Muslim countries, including Pakistan, Iran and Saudi Arabia.

And there is the catch. People in the western world, with clear consciences, shouldn’t be silent at the misdeeds of the obstinate minority. If individuals like the Dutch Geert Wilders, who called Muslims ‘goat molesters’ are given the leverage to form government, then the intellectual molestation of all of Europe will follow.

We finished our dinner that Saturday as the half-moon frowned through the window at us. “It’s the disproportionate response I am afraid of,” Mehdi Hasan said. “Only 1900 women in France wear the burqa, that’s 0.003% of the Muslim population. It’s not a question of using a sledgehammer to crack a nut; it’s using a bazooka to annihilate a fly.”

How Turkey tamed its generals: lessons for Pakistan