What happened when 20 men in Afghanistan wore burqas? 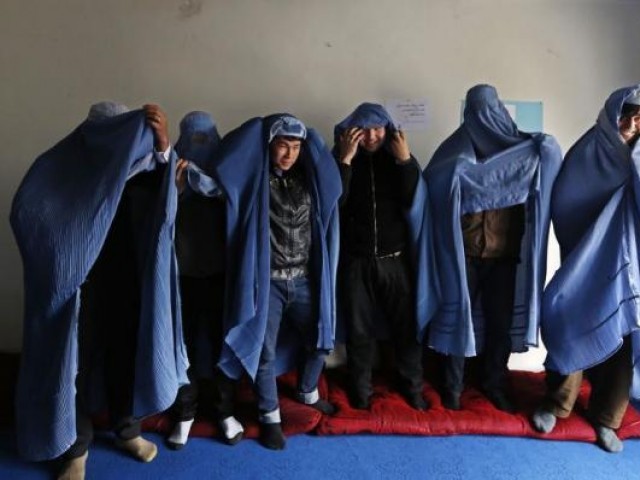 Yesterday, March 8th marked the 104th anniversary of International Women’s Day as people all over the world found unique and creative ways to raise awareness about the rights, or lack thereof, of women, calling for gender equality and celebrating the achievements of women worldwide. These were done through social media, local and international events, educational seminars, political functions, etcetera. When it comes to commemorating global events like International Women’s Day, the sky is the limit.

However, the event that stood out the most for me, and even made headlines last week, was that of a group of 20 Afghan men, fully clad in blue shuttlecock burqas, marching down the streets of Kabul, raising awareness and protesting for women’s rights. The demonstration was specifically organised to commemorate International Women’s Day by a group called Afghan Peace Volunteers.

Of course, my initial reaction to the news was that of shock and disbelief, which then quickly suffused to glee and wonder. And I suddenly heard myself saying the words I have been waiting to hear myself say for a while,

“Finally! Finally men are rallying, risking their lives and standing up for the rights of women, something that we have never seen in Afghanistan before.”

It appears that until now, only women – bold, brave women, I must add – have been trying to find ways to combat patriarchy and oppression, going as far as defying the strict rules of the country on how a woman should and should not be allowed to behave or dress. As we all know, women’s freedom is decidedly limited, as most wear the burqa in public.

However, not too long ago, as early as last December actually, a young Afghan woman was seen walking through the streets of Kabul, baring her legs to the public; something that has not happened in Kabul since the 60’s and 70’s. While veiling was still practiced back then, it was only towards the end of the 20th century, especially during the reign of the Taliban, when women’s veiling became strictly enforced. Not only were women socially ensconced, but they were also ordered to keep their bodies completely concealed in public.

Similarly, just less than a couple of weeks ago, another woman, named Kubra Khademi, was seen walking down the streets of Kabul, in a metal body armour, that she specifically had custom-made, to protest against the ever prevalent problem of sexual harassment and inappropriate touching in the country. Having also suffered from sexual harassment as a child, Khademi felt it was vital that she took the necessary actions needed to raise awareness about the issue, even if it meant defying the country’s laws and risking her life. As expected, rather than gaining support and praise for her boldness and courage, she was instead ridiculed, taunted, threatened and stoned by a boisterous group of vile men. And that is not all; she has now been forced to go into hiding, fearing for her life.

A unique protest of activist walked on Kabul streets with iron clothes to protest street harassment against women. pic.twitter.com/uIvqZNJfxm

But that is nothing new.

When women protest for their own rights and freedom, especially in places like Afghanistan; a place where women’s voices are often silenced, not only are they shunned and ridiculed for attempting to bring change, but they are also killed for it. Female rebellion is never encouraged nor seen as a positive enforcement.

Nevertheless, the protest that took place last Thursday happened shortly after the unfortunate incident with Khademi. As a matter of fact, it was supposed to serve as a response to the suffering of women, which included inappropriate touching and sexual harassment.

The only difference this time was that, rather than women, it was men: the very gender propagating oppression, hence making this protest that much more unique. It is almost like the perfect paradox. The gender that is known to tyrannise women is suddenly taking the initiative to empower women and bring about a change.

Even so, while I appreciate these men for their efforts, and for going above and beyond with the burqas and the protest in support of women’s rights, they will never truly understand the plight of the average woman living in Afghanistan. Because, at the end of the day, they are men, they are still the privileged gender; the gender that makes all the rules and has all the power. So while they may wear the burqa for a few hours, or perhaps even for a day, the difference is that they, unlike women, have a choice: they have the choice of taking it off, throwing it in the trash, and even burning it, never to see it or lay a hand on it ever again.

Women, on the other hand, do not have that option. The burqa follows the woman wherever she goes, like a dark, hideous shadow. Women do not and perhaps never will have the same sort of privilege that men have, not until and unless things change drastically in the way women are perceived and treated in the country.

Nevertheless, I am hopeful because this demonstration is undoubtedly a stepping stone in the right direction. It gives me hope that there are more men like these, living in Afghanistan and abroad, who are also striving towards gender equality.

Here’s to hoping that this demonstration will serve as a means for more men, and women alike, to find the strength, courage and motivation to come forward and fight for a more equal and just Afghanistan.

Who knows, if this continues, the future of Afghanistan may not be so bleak after all.