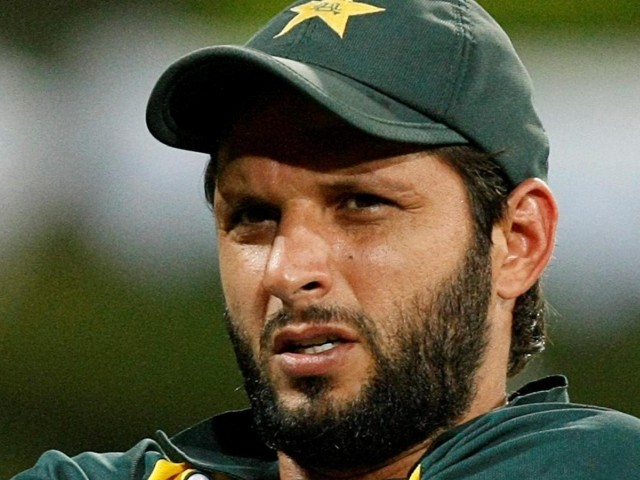 We tend to have short memory spans. Every disappointing innings seems to be forgotten every time he scores a quick-fire 40 or takes a couple wickets. PHOTO: REUTERS

On Monday, during the Pakistan versus UAE game, Shahid Afridi became the fourth Pakistani and the 27th cricketer overall to score 8000 runs in ODIs.

Among the 27 batsmen, Afridi has the highest strike rate of 116.86. He is the second player to have completed the double of 8000 runs and 300 wickets, joining Sri Lanka’s Sanath Jayasuriya.

Without a doubt, Afridi is considered a national hero all over Pakistan. No batsman gets a louder roar from the crowd as he does while walking from the dressing room to the pitch. He has managed to garner the love and adoration of millions of Pakistanis and probably will retain it long after he retires.

However, I have a slightly different point of view regarding the Shahid Afridi situation, and I believe the public’s image and perception of him explains more about Pakistani cricket than what meets the eye.

Afridi has now played 395 ODIs. This makes him a very experienced senior player. In every team sport, senior players are supposed to serve as role models, not only for younger players in the team but for youngsters who follow the team as fans as well.

Yet Afridi, year after year, seems to be sending out the wrong message. If one were to try and play a slideshow of Afridi’s batting innings, the most common image is that of a ball skied straight up in the air, only to fall into the hands an opposition fielder.

In fairness, a number of these dismissals have been under pressure where quick runs and risks were required, but the majority is due to other reasons. Too often, in times when Pakistan needed less than a run a ball while chasing, Afridi has come to the crease and slogged himself out, puzzling everybody.

A case in point is the ball tampering incident which happened a few years back.

In January 2010, when Afridi was captaining Pakistan – due to the absence of Mohammad Yousuf – in the match against Australia in Perth during the fifth Commonwealth Bank ODI series, he was confronted by on-field umpires after the TV umpire had spotted something amiss and the match ball was changed.

Immediately after the game, Afridi was called into a hearing with the match referee and pleaded guilty for biting the ball twice. In later public comments, Afridi admitted to tampering the ball saying,

“I shouldn’t have done it. It just happened. I was trying to help my bowlers and team win a match, one match”.

Afridi sinking his teeth into the cricket ball was seen by everyone on television. As a Pakistani, I felt embarrassed, because this man was not only representing my country, he was also filling in as captain. Even though this was five years ago, Afridi was still a senior player at the time, and had once again sent a negative message to millions of young admirers.

Another case is his early retirement from Test matches.

In July 2010, Afridi captained Pakistan in the first Test of the series at Lords against Australia. He scored 31 off 15 deliveries in the first innings and two in the second and was dismissed as a result of rash strokes in both. After the match, Afridi announced his retirement from Test cricket (not for the first time) citing a lack of temperament for the longer format of the game.

Every true follower of the sport knows that actual cricket is Test cricket. The best players of Test cricket are the best players in the world. It is where the true technique and temperament of a player is ‘tested’ and where captaincy is most important.

Again in fairness, Afridi admitted to lack of temperament for this version of the game himself, but in many ways that was a disappointment. Test cricket is the highest form of cricket and should be every player’s ambition. I was disappointed when I heard Afridi was retiring, especially because he personally felt he was not up to the mark.

Despite all the lows, Afridi has enjoyed more love from Pakistani supporters than any other player. This is because for every 10 poor performances, Afridi manages to give a sensational one, and that seems to balance out everything.

Still, however, for Afridi, at the climax of his career, I think it’s a case of what could have been. The 35-year-old, on the basis of talent, would top any list of cricketers in the world; but what he has produced with all that potential is the true tragedy of the matter. He has shown that he can play every shot in the book but has also shown that after two decades of playing the game, he cannot pick which ball to hit.

Many fans have defended his succession of poor batting performances by saying that he should be treated solely as a bowler, but deep down every cricket fan knows that Afridi was meant to be much more, and very rarely does an entire stadium rise to its feet to cheer on a ‘bowler’ when he comes on to bat.

Our constant, and at times blind, support for players like Shahid Afridi is worrying.

We tend to have short memory spans. Every disappointing innings seems to be forgotten every time he scores a quick-fire 40 or takes a couple wickets. We tend to admire players for their flare instead of their consistency, honour and leadership.

Take our current Pakistani captain, Misbahul Haq – a player with no flare but definite consistency, honour and proven record for captaincy and leadership. Misbah is treated in the opposite way and is often remembered for his very few flop performances compared to the many times he has performed brilliantly under pressure to bail Pakistan out of trouble.

Shahid Afridi has had a very eventful career but it should be remembered that he was the slowest batsman to reach the 8000-runs milestone.

Does he offer anything to the current Pakistani team? Absolutely. I feel he is still a valuable player as a leg-spinner, fielder and at times, very few times, a lower order batsman. But I believe that a player with as much experience as him has a strong duty towards serving as a model and mentor for younger players as well.

The way Afridi bats, repeatedly, is damaging to both young cricketers in the team and youngsters watching him back home who could be potential players in the future. Being a valuable player is not and should not be more important than being a role model.

The way Afridi plays his game, at his age and with his level of experience, would not be tolerated in any other Test playing nation’s team or by the supporters, and I strongly believe the same should apply in Pakistan.

I wish him all the luck in the world for his final few ODIs, but I can only sit and wonder what could have been had he played with a more level-headed approach and achieved his full potential.

Sadly the world will never know.