Why Pakistan is ranked third in slavery, women rights and terrorism 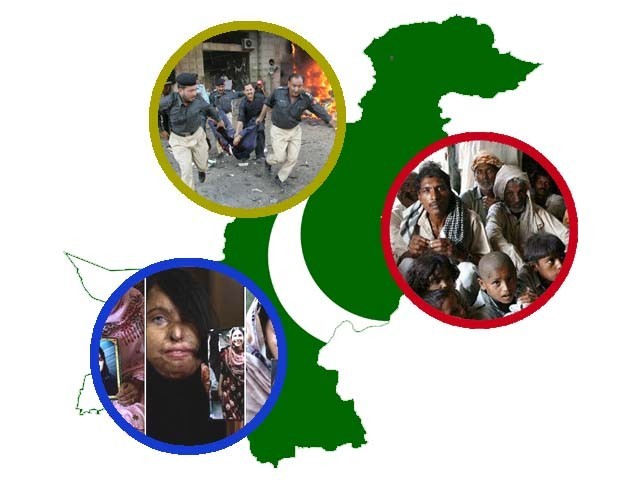 They are focused on teaching fascism than pluralism, extremism than mediocrity, antisocialism than socialism.

As per the latest surveys, Pakistan is ranked as the third most dangerous country for women, third on the human slavery index and third on the global terrorism index.

Although this country is enormously blessed, be it with coal reserves, ideal geographical location, warm water, or mountainous buffer zones, its foreign image is downsizing, its economy is attenuating, trade deficit is flattening and the only label due to which it is mostly known is through its brand of ‘terrorism’.

The crux behind many of these issues lies in our denial – denial of evolving fascism, denial of accessing true culprits, denial of intra-border problems and denial of our inefficacy in addressing them. Rather than inculpating foreign hands in flaring Pakistan’s status quo, internal culprits need to be located.

Are we, as humans, as citizens and as Muslims, playing our part responsibly and actively?

Again, denial at this part of our shortcomings to not to keep our vicinities clean, to not to vote for democracy and to not to take care of our neighbouring brethren, has put us in danger. It shouldn’t be forgotten that charity begins at home.

Moving a step ahead, most of our problems lie in us being Islamic nationalists. Pakistan was never a theocratic state. Eschewing the recognition of ethno-linguistic identities has created the Muhajir-Sindhi, Balochi-Punjabi, Pathan-Afghan and the latest Sunni-Shia divides.

Undoubtedly, Islamic ideology is the best ideology but the unfortunate part is that it doesn’t suit us. We are a morally, ethically and religiously impoverished nation. Most of the schools and clerics infiltrating religious knowledge are rotten, intolerant and inflexible – and that’s the mode of Islam they propagate. They are focused on teaching fascism than pluralism, extremism than mediocrity, antisocialism than socialism. These fascist teachings and their culmination in cultural and sectarian divides have cumulatively fed the flourishing terrorism industry.

There is utter need of such state actors who will excommunicate extremists and their apologists, who will work for the betterment of the nation as a whole, who will encourage a homogeneous and united country and who will rather act than do dilly-dally planning.

The operation led by Pakistan army in FATA is highly appreciable. But why, despite all these operations, the terrorist network is not failing and swiftly dispersing? Because their motivating agendas are mammoth. Ergo, the state’s reliance on solely the army cannot uproot this plant of terrorism. The bitter fruits breeding these seeds are to be mitigated parallel. This can be done by joint efforts of the civilians and government. The roots flaming extremism should be streamlined and nipped in the bud. Unless the pseudo ideology is not weakened, terrorism bodies will keep on solidifying.

In this regard, preaching quality education unequivocally and impartially is one of the first onuses of the state. Focusing on increasing enrolments cannot do any good until policies are regulated strictly and education is imparted in solemn manner. Depriving a nation from their basic right of free and quality education is like crippling them and a crippled nation is liable to more manipulative efforts.

The deed of arming teachers and schools subsequent to the Peshawar attack is an appalling step taken by the authorities. By doing this, we have only instilled the idea of fighting through weapons than fighting through the pen in future generation. Such lunatic steps only increase the chances of our nation’s destruction.

Investing on human development is need of the hour. Sturdy law enforcement agencies are waiting to be revamped and long-stalled local government elections should be kicked off to uphill the opportunities of better governance. It is historically seen that once the internal situation of a state is stabilised, it becomes less vulnerable to external chaos. Until and unless we do not look within ourselves and introspect, our position on these indexes would only grow worse.

She is a thinker, reformist, peace activist, risk-taker and telecommunication engineer from Mehran UET. Her literal interests include history, natural realities and human rights