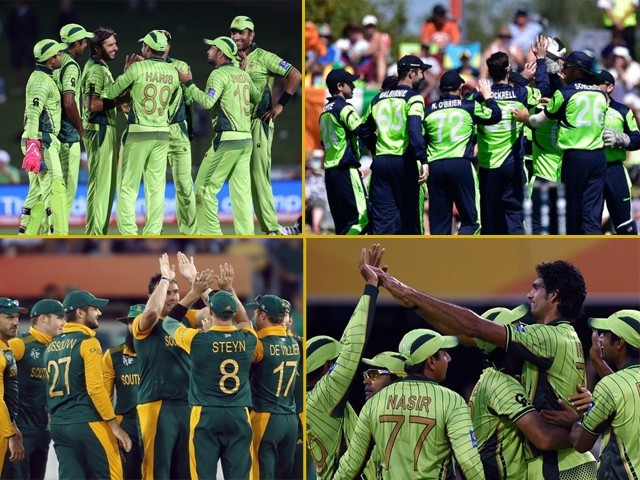 With two matches to go, Pakistan is not where we want it to be, keeping in mind that we have to face the mighty Proteas and giant killers, Ireland, in the next two matches. PHOTO: AFP

Pakistan is in a decent run of form and finds itself sitting not-so-pretty at the fourth spot in the World Cup.

In relation to the Pakistan-South Africa match, which is to take place tomorrow, countless people in Pakistan believe that the team is not capable of winning against the Porteas, the only side in the history of the game to score 400 plus in two consecutive innings.

Only the top four teams will make it to the quarterfinals and looking at the ranking right now, Pakistan either needs to move up the rank or maintain their fourth position to qualify.

However, there is a lot of work to be done and most of it has to come from the team management. It has been under severe scrutiny ever since it made some controversial player selections, like Nasir Jamshed, and ignored talented players, like wicket keeper-batsman Sarfaraz Ahmed.

So I have come up with a few factors which the Pakistan team must take into consideration in order to stay in the race for the quarterfinals over the next few games.

We are not qualified – yet

The enormous mistake Pakistan can make right now is believe that,

The ideal attitude would be,

Pakistan is on a very delicate footing right now, and we need to keep our calm and focus on the job. One bad day or one small, uncalculated mistake can still ruin our chances.

Sarfaraz is the talking point for all ‘self-proclaimed pundits’ of cricket at the moment. All of us wonder as to what he has actually done to go from the most ‘useful’ player in the squad to the most ‘technically flawed’. Recent comments from Waqar Younis have left us all wondering what the team management actually sees in Jamshed that the whole cricket fraternity cannot.

What is so impressive about his ‘slab’ like stance in batting and why do Waqar or Misbahul Haq continue to overlook his inflexibility while batting or fielding? One must wonder what he has actually achieved, if not in the World Cup then maybe back home in the domestic circuit, which makes our team management so adamant on including him in the line-up that is already full of batting woes.

None of us seem to have an answer to these questions, but whatever reasons may be, it’s high time that we include Sarfaraz back in the line-up, because there is no way he can perform worse than Jamshed. I mean, you can’t score less than zero runs or can’t make it worse than dropping everything that comes your way on the field.

So please, play him. This thought is now even trending on Twitter with the hashtag #BringBackSarfaraz.

Guys! Grab your keyboards and start trending #BringBackSarfaraz as we need this man back in our team! pic.twitter.com/g5cxnAK1rF

Make Sarfraz open at least he will be +ve enough to take some pressure off the middle order. be fair n fearless.#PAKvsSA #Bringbacksarfaraz

If they want to include Sarfaraz, then play him at 6 or 7. Open with Haris and Ahmad. Sarfaraz should play as finisher. #BringBackSarfaraz

Keeping this in mind, and also seeing the hesitance of our team management to bring in Sarfaraz as an opener due to his technical deficiency, it makes sense to send in Shahid Afridi at the top of the order, which will make room for the likes of Sarfaraz to bat where our team management feels comfortable with him.

Afridi is in a rich phase of form lately (at least according to his own standards) and this move should help Pakistan in getting rid of this opening partnership dilemma, at least for this World Cup. Afridi has an experience of opening in more than 120 ODIs, so it will not be something that he is not accustomed to.

Pakistan has a pattern of losing their first wicket in the first or second over anyway, so Afridi surely won’t do worse than what Pakistan has already done in this tournament, as he just needs a ball to surpass that 5.5 runs average per innings. In hindsight, if this works, it will give much needed time to Ahmed Shehzad and Haris Sohail to settle down without feeling the pressure of dot balls. Giving Afridi freedom at top of the order can do wonders for Pakistan as it might give room for the team to create that much needed balance.

Break the game into blocks of 10

Since I started watching cricket back in 1992, I always saw that teams who produce results on the field divide the game into blocks of five overs or 10 overs while batting. Pakistan used to do the same with Inzamamul Haq and Mohammad Yousuf stabilising in the middle. However, in last four to five years, I have failed to see that from the current ODI outfit.

I won’t point out only Waqar’s tenure, but also the Dav Whatmore tenure, when Pakistan seemed like a team who was always short on the game plan. The only plan was to hit and see where you go with it, and the notion was that if something goes wrong, we have Misbah to fix it for us.

That is one of the reasons why we are where we are today. We need to break the game into five blocks of 10 overs and then further break it down to two blocks of five overs, set small targets and see where we are at the end of those blocks. Every successful side does this and we need to start doing this sooner than later.

With two matches to go, Pakistan is not where we want it to be, keeping in mind that we have to face the mighty Proteas and giant killers, Ireland, in the next two matches. Practically, and in all fairness, this Pakistani side does not look like the one who can beat one of the tournament’s favourite. Knowing this fact very well, our primary target should be to not lose too badly against South Africa tomorrow, because if we do, that will leave us with too much to make up for against Ireland. We should go for the win, yes, but there has to be a plan B too.

In a long tournament like the World Cup, you need to keep everything in mind and give yourself a chance to fight for another day before the knockouts. So the lesson for Pakistan, for the upcoming match, is to fight and stay in touch with ground realities; a close enough defeat will not hurt us as bad.

Cricket is a game that has evolved immensely in the past decade or so and you cannot just get away with a plan that you made while having a team meeting in a hotel room. You need to be smart on the field to produce results. Misbah and the rest need to play smarter than how they have been already.

It might not be their forte to play smart cricket but this is the need of the hour for the men in green, if they want to progress in this tournament and beyond.