“Practicing Islam in Short Shorts”: A passionate response to its critics 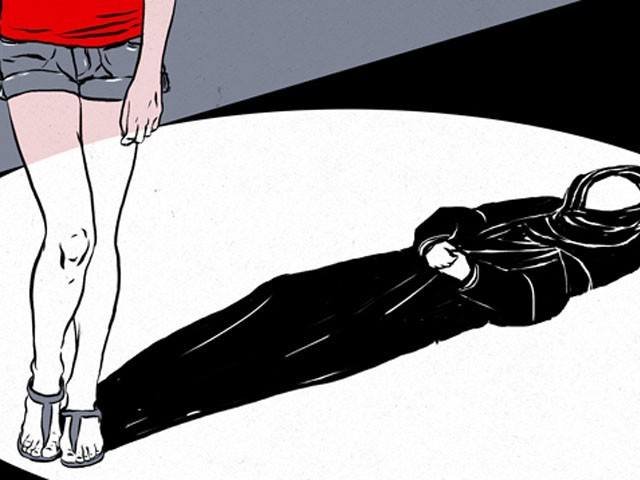 Here was a young Muslim woman narrating her spiritual journey of how she transcended hollow religiosity, liberating herself from the chains of organised religion. PHOTO: TRUE STORIES.GAWKER

If you haven’t already read “Practicing Islam in Short Shorts” by Thanaa El-Naggar that went viral last week, now would be a good time to do so. The article is so well written and so meaningful that it was nothing short of a breath of fresh air; it was like her voice was speaking directly to my soul, almost as if applying cold balm to my wounds.

Here was a young Muslim woman narrating her spiritual journey of how she transcended hollow religiosity, liberating herself from the chains of organised religion. Previously being a conservative minded Muslim myself, I felt like patting her on the back after I finished reading her piece. After all, you don’t find many religious people who can really put their faith to test, and carve out their own spiritual path as compared to conveniently following what their parents or society teaches them.

It was no wonder though that many concentrated more on her wearing short shorts, drinking whiskey and smoking weed – causing quite a bit of controversy. And when critics started popping up on the blogosphere, I decided to respond in her defence.

Criticism is healthy, so long as it is constructive and not just for the sake of it. Unfortunately, in the couple of critiques I read, none of the analysis had anything truly substantial to offer, and it seemed that they had failed to grasp any real idea of what she was trying to convey. Instead, they interpreted the article to mean some sort of an endorsement by the author for wearing short shorts and consuming intoxicants in the name of Islam.

And here is where I beg to differ.

Nowhere in her piece does she argue or even hint that these choices of hers are Islamic, even in her own liberal interpretation of Islam. What she advocates is religiosity that “lives and let lives” instead of excommunicating people due to a difference in opinion or practice. What was ironic to observe was how some of the criticism was in the same self-righteous “I-know-it-all, let-me-save-you” tone that the author seemed so fed up with!

For example, one read,

“The fact that she is a Muslim is true; no one can take that away from her. She is a Muslim, but not necessarily a mo’mina (true believer).”

As well-intentioned as this sentiment may be, it feels completely out of place. Let’s face it, at the end of the day, we’re all human and all of us make mistakes. For a mere mortal to decide who qualifies as a ‘true believer’ in itself is absurd. You may think I am not a ‘true believer’ and I may think you are not a ‘true believer’. If failing to practice each and every tenet of Islam leads people to not being “true believers” then I guess none of us really are.

Do we never lie or gossip?

Do we stand up against oppression?

Do we not consider ourselves superior to those from other religious backgrounds?

The list is endless. So, ultimately, it is pointless to even make such a suggestion.

Sure, striving to practice the teachings of the Holy Quran as much as possible should be the ultimate aim for a Muslim, but naturally, very few of us attain that level of spirituality. Striving for perfection should not mean that one should feel remorse for a shortcoming here and there. If anything, it should enable us to appreciate the humanness of one another and make us humble enough to focus on our own spiritual path, instead of throwing stones at others who slip.

Furthermore, and I’ll say it again – we’re human, not God. Let us be humble enough to internalise that fully. It is simply not in our domain to decide who is a “true believer” and who is not, unless this person’s actions results in the oppression of others.

The dumbing down of religion, which Thanaa talks about in her article, and restricting it to only the rigid do’s and don’ts devoid of any spirituality has created a void that has led many people away from religion altogether. Those that stay, at least a good majority of it seem to practice a very superficial form of it.

But it doesn’t have to be that way.

Why do we forget that the Holy Quran is not only concerned about modest dressing and avoiding intoxicants, but that it is concerned about spiritual evolution, social justice and unity of humanity? If it helps to put this into perspective, references to modest dressing and avoiding intoxicants in the Holy Quran are not even in the double digits. Of course, not to suggest for a second that these topics aren’t important, but are they more or equally important as the other tenets mentioned above?

We seem to be more concerned about our identity as ‘religious people’ by dressing and speaking a certain way than we are about making that inner transformation happen. It becomes a classic example of confusing the means to an end with the end itself. And that makes me question, aren’t all of us not terribly missing the point?

Essentially, what it all boils down to is this – is wearing short shorts and consuming intoxicants really a priority over the rising sectarianism, dogmatism, the erosion of moral values, poverty, illiteracy, corruption, and the alarming abuses of human rights that seem to plague Muslim majority countries today?

I wouldn’t think so.