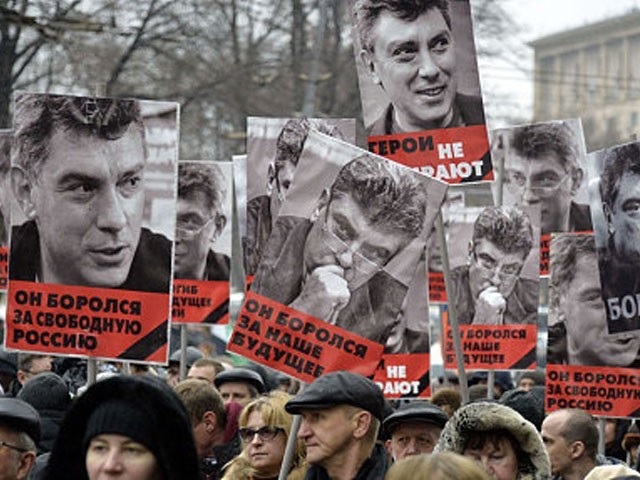 This was soon after Boris Nemtsov’s, former deputy prime minister during Yeltsin’s government, dead body was found on a bridge in front of Kremlin and St Basil’s Cathedral in Moscow. According to reports, 55-year-old Nemtsov was shot multiple times by an unknown assailant while he was walking with his Ukrainian girlfriend on the Bolshoi Moskvoretsky Bridge near the Red Square.

A mass gathering, that was initially aimed as a rally against Putin turned into an act of mourning for Nemtsov. Thousands of Russians have gathered in Moscow to pay tribute to a leader who was considered “a hope” for change in the current system. In an attempt to heal the wounds of rally participants, Deputy Prime Minister Arkady Dvorkovich also visited the hall where Nemtsov’s casket was on display for mourners to pay their final respects.

Much of the media coverage has already connected Russian president, Vladimir Putin, in the murder case, citing Nemtsov’s fierce opposition and rivalry with him, which has proved to be another setback for Putin and his political standing.

Nemtsov was an opinionated critic of Putin and his politics, both at home and abroad, especially with regards to Ukraine. He was also one of the forerunners to float the idea of capitalism and western economic models in a Soviet ruled Russia in late 80’s. Although his ideas were radical at the time for many, they slowly gained support soon after the Soviet disintegration.

Hence, Nemtsov’s murder comes at a very crucial point in time. Russia is already suffering a hefty backlash of western sanctions over its alleged role in escalation of conflict in Eastern Ukraine. The Russian economy, currently facing a slump, can rarely afford another series of sanctions, especially when a ceasefire deal on Ukraine has been brokered during a recent summit in Minsk and Moscow in hopes for some respite from the West.

While some of the western media outlets have treaded with care in reporting on the murder, others have pinned the murder outright on Putin’s regime. The reason for such an allegation is simple; Nemtsov recently stated that Putin could kill him for his opposition of Russian role in Eastern Ukraine. To ease such allegations, Kremlin reiterated that not only had Putin taken charge of the murder investigation but has also asked for an impartial inquiry into the matter.

Furthermore, Kremlin also termed the murder as “a provocation to lay blame on the government”.

In an initial inquiry report on the murder, presented by The Investigative Committee, suggested possible suspects which included Muslim extremist and Russian Ultra nationalist groups, along with Nemtsov’s personal opponents.

Putin has long been accused of taking heavy handed measures against opposition leaders. His critics cite the use of state owned media for creating a pro-Putin nationalistic sentiment and spreading false propaganda against rival leaders.

Matthew Luxmoore, a British journalist based in Russia, writes that Nemtsov’s murder is,

“A direct result of an aggressive state-sponsored campaign against those who condemn Russia’s policies in Ukraine”.

Such campaigns also indicate towards an ultra-nationalist niche flourishing in Russia in the past few years; a group that is hostile towards the west as well as the foreign workforce in Russia. In the midst of all such complications, the question still remains: Who could have killed Nemtsov after all?

It could be Putin; who could gain a lot by eliminating a prominent opposing force, but could also lose a lot in terms of deleterious publicity, political instability and further media embarrassment.

A time when Putin is already under severe political, global and economic pressure, Nemtsov’s murder would further leave a dent in his future prospects.

But Nemtsov has been criticising Putin for long, so why kill him now? And if Putin had to kill someone, why not kill more prominent leaders like Alexei Navalny?

But then, it could also be a third party; a force having a personal grudge which may have timed the event well with an opposition rally in Moscow in sight.

Nemtsov’s murder has indeed left behind a number of unanswered questions – questions whose answers may never be found out. Speculations on the motives of the murder are plenty, and blaming anyone this early would simply be jumping the gun.

But whoever murdered Nemtsov certainly cherry-picked a very strategic time to do so.