‘Maid’ is not a synonym for ‘Slave’, Pakistan! 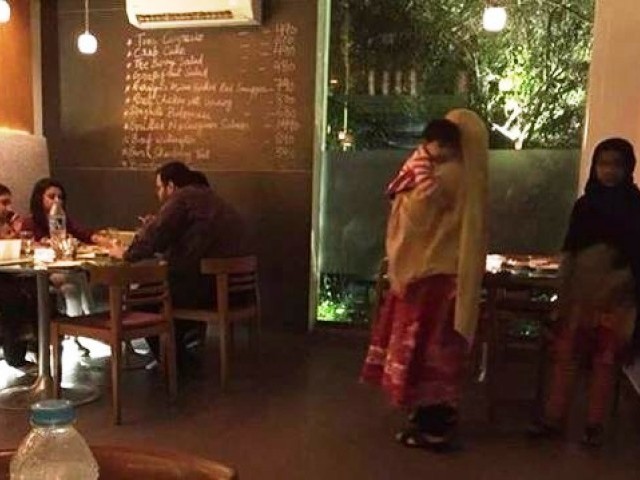 A lot of questions have been triggered by this photograph. I hope, for the sake of us and our children, that we find answers to these prodigious problems as soon as possible. PHOTO: YUSRA ASKARI/PEOPLE OF PAKISTAN

I came across the picture given above on a blog called People of Pakistan and it left me dumbfounded. I have seen many real-life incidents like these in Pakistan, but none have had a similar effect. The photograph shouts out everything that is wrong with our social fabric today and it makes me absolutely furious.

Here are a few reasons this photograph disturbed me:

1. The family in the said picture brought their maids to the restaurant with them to take care of their kids so that they could, I suppose, enjoy a ‘peaceful meal’. My guess is that the maids were either fed beforehand at home or that they would go back home and eat. Whatever the case may be, these maids were made to stand in the middle of this restaurant, surrounded by people who were dressed in clothes that the maids couldn’t dream of wearing, eating food that cost as much as the monthly salary of these girls, in a place they wouldn’t dare to have entered had the circumstances been different.

So why, pray tell, was this family so hell-bent on making them feel more inferior than they must already have felt? Imagine yourself standing in the middle of a grand banquet in France, surrounded by people who belong to a much higher income bracket than yourself, conversing in a language that is alien to you. This was your first visit to France and you are very aware of these things – so is your host (who you don’t particularly like) – but they don’t really care.

Now imagine your host handing their child over to you (for a few seconds only) to get the table set. After laying the table, everyone takes a seat, but the host, in his or her haste, forgets to add your table setting. When everyone takes a seat, you are the only one left, child in hand, standing awkwardly in the middle of this lavish gathering. The host laughs apologetically, and asks someone to set a place for you immediately, pish-poshing it to the side as something very small. You suspect that this was done on purpose, but you are bent on handling the entire scenario with grace; after all you needed to protect your own ego.

Some of the guests smile at you sympathetically, but no one offers you a seat. Someone lets out, a very audible, snooty snort. You ignore it, but you feel your cheeks becoming warmer by the second. Your face is red, but you tell yourself this is not a big deal, the host just forgot, so it’s okay. Everyone resumes their conversation while you wait for your table to be set. It only takes a few minutes, but for those few minutes, you are no longer part of the gathering. You weren’t made to feel like a part of the gathering to begin with but this little incident, albeit accidental, made you realise just how much of an outsider you really are. You go home and you recall the incident – and whether you like it or not – you hate the host. And for good reason!

And that is how those maids feel every day of their lives. Our lack of empathy is appalling!

2. The unfortunate fact is, parenting is no longer maternal care or paternal love, it a social obligation that is fulfilled through extravagances like money, top-schooling, travelling, the best goody-bags, the most expensive birthday parties, ‘maids’ and ‘babysitters’. I was recently told that a mother asked her maid not to speak to her child because she wanted the child to speak in English only – and since the poor maid could not speak the language, the mother didn’t want her to talk.

While I understand that in this day and age, it is difficult to put the rest of your life on hold and nurture your child or find the right balance between the two, the responsibility of the upbringing of your own child just cannot be delegated.

The sooner we understand that, the better.

3. If this was a ‘family outing’ the maid should not have accompanied them. If this was a social call, the children should not have been brought out. If this was an exception to those two scenarios, the maids should not have been made to stand out like sore thumbs in an already snooty environment. And if this was done because ‘oh we can’t leave our child alone with the maid because something something security’ then read point 2. In other words, DON’T HIRE A MAID! Sexual abuse, kidnapping and even stealing are not unfamiliar terms associated with domestic help in Pakistan, but that does not mean we presume ‘guilty until proven innocent’ and hence deprive our domestic help of even basic human dignity. ‘Maid’ is not a synonym for ‘slave’.

4. The problem here is not that maid was looking after the child; the problem is the manner in which she was made to look-after that child. If the toddler was a handful for the mother to handle along with her other children, the maid should have been afforded enough dignity to be given a seat; she is looking after your child for God’s sake! Being a mother is not easy work, but being a ‘mother’ to someone else’s child is an even bigger task – acknowledge that!

You can’t handle your own child – and if she has the skills to handle the child, does that not make her superior to you? Not only did this couple succeed in making the maids extremely uncomfortable, they succeeded in making other people around them uncomfortable too; hence, the photograph.

5. It is disgraceful that in today’s age, when we are busy trying to fight for women’s rights and domestic rights, Pakistan still indulges in this form of slavery. Yes, that is what it is.

Putting aside the social issues that the said picture highlights, we need to understand that this is a problem that runs deeper than it looks. We are successfully corroding the very roots of family life and making ourselves expendable to our children. When we have placed ‘parental’ replacements in the lives of our children, how can we expect them to develop any bond with us, let alone love us ‘unconditionally’?

In light of all this, how can we expect to change the way society works when we have no qualms in making two people stand in a restaurant and wait for us to finish our meal while they look longingly towards everything they could never have? If we have decided that there is nothing wrong in treating our maids and domestic help like this, then let us also accept the fact we indulge in an archaic, deplorable, activity called slavery.

Don’t guise your wrongdoings as something that is part of their ‘job description’. Say it as it is – she isn’t your maid, she is your slave. Say it. Don’t shy away from the derogatory term – it is what it is.

Don’t try and fool yourself. At least then we won’t have to pretend that you have come from an educated background.