#IStandWithMariam but if you don’t love Pakistan, leave! 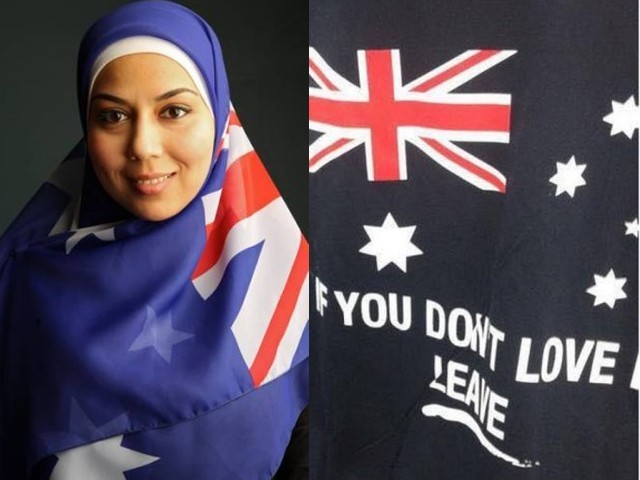 Mariam Veiszadeh is an Afghan Muslim living in Sydney and found it racist of Woolworths to sell the singlet. PHOTO: TWITTER

Mariam, mother of two, is an Afghan refugee in Pakistan. She sought refuge even before the Afghan War started and has been proudly calling herself a Pakistani since then.

Pakistan provided her the liberty to do what she wants without any fear or prejudice. Her children take advantage of an education system unavailable in her home country and she herself is a trained lawyer, an opportunity that is a dream for women in Afghanistan.

“If you don’t love it, leave,” with a Pakistan flag printed on it.

This was a clear innuendo that, if you don’t love Pakistan, leave it. She tweeted a picture of the shirt and thought this display of nationalism is bigoted and racist. This soon evolved into a twitter revolution. The supermarket took down the shirt and said it should have never been stocked in the first place.

Before we delve deeper into the case, let us read the above paragraphs again.

Is showing patriotism and love for your country wrong? Is it racist to suggest anyone who doesn’t like Pakistan to leave it?

No, I’m not an over zealot patriot, because that never works either. There is a line between patriotism and unbridled love that no citizen should cross. Needless to mention, I have no qualms in suggesting Mariam should also grow a thicker skin if she was offended by the tagline and thought it is racist.

However, there is a twist to this incident. This actually transpired in Australia and gained momentum a few weeks back. Mariam Veiszadeh is an Afghan Muslim living in Sydney and found it racist of Woolworths to sell the singlet.

She tweeted the picture and the supermarket took down the singlet, apologised on their social media page and ensured their company policy is to foster,

“An environment where everyone is treated with dignity, courtesy and respect.”

As some people like me were still trying to understand how a singlet with that tagline impacted an environment of ‘dignity, courtesy and respect,’ something else happened that did tatter all those values.

Mariam’s initial overreaction to the singlet spilled out of control and she became a victim of cyber hate crime when she was racially attacked by white supremacists who defined her with not-so-colourful adjectives. If Mariam was offended by what the singlet read, I wonder what she had to go through while reading websites and tweets that called her a w$%*e and swine. A 22-year-old Ipswich woman is currently under trail for the racial attacks she carried on Mariam.

A white supremacist website which, according to them, is the most visited website in Australia, also gave it a religious twist and ‘Muslims’ were under fire for being intolerant and subhuman creatures. The website also encouraged its followers to target Mariam and, as they put it,

“Flood this towelhead subhuman vermin with as much racial and religious abuse as we possibly can”.

Although irony stabbed itself in the back when the intolerant white supremacist website blamed the Muslims for being intolerant, but that’s another debate.

This shameless and racial and religious attack is actually more bigoted than the singlet could ever be. It is unfathomable what somebody who found the singlet racist would have gone through with how she and the religion were targeted. Nobody can condone the acts of the white supremacists and how they twisted Mariam’s tweet into a fireball of religious and racial attacks.

As #IStandWithMariam like many other Twitter users for what she had to go through and post my tweet on Twitter trend, I’m still trying to figure out why you wouldn’t want people who don’t love the country you call your own to leave it. When did patriotism become racist and bigoted?