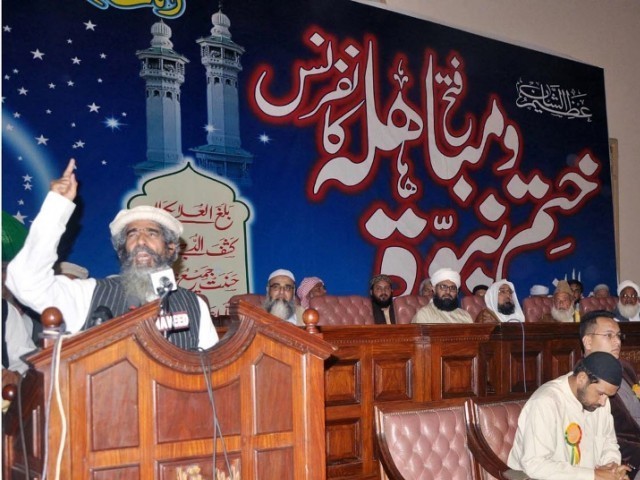 I hope this letter finds you well. I am sure you are busy; so let me cut to the chase.

You know well that Pakistan’s Ahmadi community has long faced the wrath of extremist religious clerics. Despite succeeding in hijacking Jinnah’s vision, and pressurising the state into incorporating anti-Ahmadi bigotry into the Constitution and law, these clerics have continued to demonise, spread hate and incite violence against the Ahmadis. The group currently at the forefront of this witch-hunt is Pakistan’s Khatam-e-Nabuwat organisation. Whereas this organisation claims to uphold the honour of Prophet Muhammad (pbuh), it does everything under the sky against his teachings of peace, tolerance and respectful difference of opinion.

Ahmadis are already denied their freedom of speech, worship, assembly, and even identity in Pakistan. The Khatam-e-Nabuwat group, however, is not pleased with just this. It holds conferences on a regular basis, calling on governments and the public to banish and boycott Ahmadis even further. Through these forums, extremist Mullahs also call for increased violence against the Ahmadis, some even issuing death edicts against them.

Sir, it is very disappointing to note that your party has consistently aided these radical clerics in their bigoted anti-Ahmadi agenda. When mullahs demanded that the name of my hometown – Rabwah – be forcibly changed to Chenab Nagar against the wishes of its residents, the then Punjab chief minister, Shahbaz Sharif, immediately appeased the Mullahs. In 2008, when all 23 Ahmadi students from Punjab Medical College were rusticated due to their faith, the Punjab government under Mr Sharif turned a blind eye again. Fearful of upsetting the radical right, the Pakistan Muslim League-Nawaz has always participated in, and even sponsored, anti-Ahmadi hate conferences across the country.

In January of 2012, leaders of your political party attended an anti-Ahmadi rally demanding Ahmadis evict their place of worship in Rawalpindi.

“That time is near when Muslims will kick out all Qadianis from Pakistan”, was the popular call from clerics at this rally.

'that time is near when Muslims will kick out all Qadianis from Pakistan' – Ghafoor Pracha, VP, All Pak Trade Unions. #Rawalpindi #Ahmadi

Mr Prime Minister, you are well aware of your party’s role in abetting sectarian hate. You have personally been guilty of this crime. In 1989, you sent a message to a similar anti-Ahmadi hate conference in Chicago, boasting about your government’s role in suppressing the civil rights of the Ahmadis.

In short, your political party has a long history of appeasing to extremists and sectarian outfits, while turning a blind eye to the continued violence against our minorities.

Then came what some described as Pakistan’s “9/11 moment”.

The brutal killing of 135 innocent kids was indeed one of the heaviest in an endless list of tragedies we have had to endure in recent times. Your government was quick to formulate committees and announce a National Action Plan – an anti-terrorism program to crack down on growing sectarianism and terrorism in the country. Your plan rightly identified hate speech by religious clerics, and the open distribution of sectarian hate literature, as a crucial factor in the prevalent culture of intolerance and extremism. Your government seemed to have finally realised that terrorism cannot be defeated if the extremist ideology behind it continues to flourish. The committee rightly noted that this ideology of hatred and intolerance – rabid Mullaism – needed to be subdued, and wanton hate speech emanating from some of our mosques and madrassas had to be checked.

Was your government serious in its resolve?

Was it finally going to side with the victims of Pakistan’s extremism problem?

Just days after the Peshawar attacks, however, controversial TV host Mr Aamir Liaquat allowed a panel of clerics on his show to accuse Pakistan’s patriotic Ahmadiyya community of sponsoring terrorism in the country. Ahmadis were labelled “Jewish agents”, traitors and “the enemy” of the state on his show. Consequently, an innocent Ahmadi farmer was gunned down in the Punjab. Despite this incitement and hate speech on national TV, there were no repercussions to Mr Liaquat’s reckless provocation. This was the first sign for me that your government was not serious in its stated resolve to fight extremism.

Then, just yesterday, a similar hate conference was held in Aiwan-e-Iqbal Lahore to bash the Ahmadis. Guess who presided over this meeting? Your very own PML-N MPA, Mr Muhammad Ilyas Chinioti.

Mr Chinioti is well known for his hatred of the Ahmadiyya community – and for his corruption. In an anti-Ahmadi conference in 2008, he proclaimed:

“Qadianiat is a cancer; there is no treatment except operation.”

In 2009, Mr Chinioti called for an armed jihad against the Ahmadis, referring to them as “the worst enemies of Islam and Pakistan”. Then in 2012, he called on the Pakistan Army to outlaw Ahmadis from the institution. Despite all evidence of his despicable comments and blatant bigotry, he continues to enjoy a high position in your party. So much for your fight against hate speech.

In the latest hate conference held yesterday, Mr Chinioti used threatening language against the Ahmadi Muslims. The mullah lamented that merely declaring the Ahmadis as non-Muslim was not enough.

“They must give up their faith and become Muslim or face consequences,” he threatened.

It is disconcerting to note that while your government refuses to permit Ahmadis to gather for peaceful assembly, your parliamentarians continue to issue vile threats against them at such anti-Ahmadi hate conferences carried out across the Punjab.

If the National Action Plan is anything but hypocritical ink on sham paper, set an example by holding your MPA Mr Chinioti accountable for shamelessly presiding over a hate conference against Pakistan’s peaceful Ahmadis. This action will be in accordance with multiple clauses of your National Action Plan.

And if you refuse to take action, it will be clear that nothing has changed for you post-Peshawar attack.

By continuing to sponsor the hate culture that nourishes terrorism, your government continues to fail the children of Peshawar.