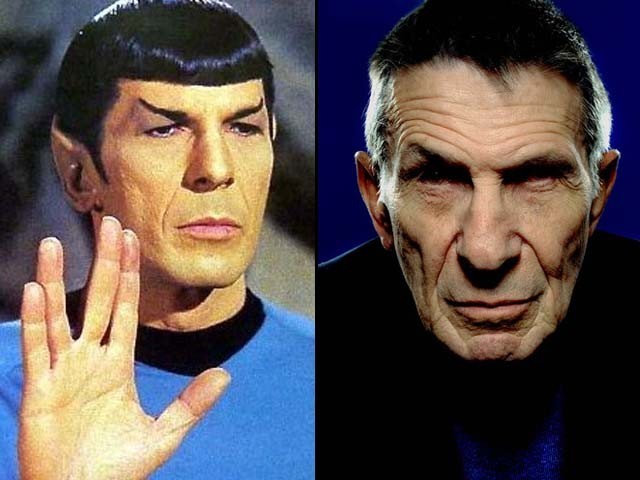 In my opinion, no other actor can even dare to come close to the genius Nimoy exhibited in the characters’ execution.

The Star Trek series, as with all offerings produced in the ambitious 60’s and 70’s to define the newly construed sci-fi genre, attempted the most arduous task of instigating a solemn courtship; that between imagination and high-tech innovation (which was projected to arise in the future).

These emphatic productions, both in print and electronic media, called upon people to stretch their neurons, and envision a world of endless possibility; where advancements in technology enabled mankind to solve its most fundamental, age-old maladies – such as aging, warfare, disease, as well as lack of unity.

When one ponders over the various issues deliberated, and expounded upon, in stark detail in the immensely popular Star Trek series, such as the first contact with alien species (incidentally, the rationality-worshipping and emotionally grounded pointy-eared Vulcan race, to which Leonard Nimoy’s character Spock belonged), warp-drive capability (enabling space travel at the speed of light), as well as teleportation (transfer of sentient beings through molecular meddling, from one place to another), all the various plot elements, which culminate in the very best of sci-fi narratives, come to light.

By now, I believe that the discerning reader can guess, quite astutely, that I, like many others, am a Star Trek fan. Indeed, I have been a devout follower of the series since I was five-years-old and have eagerly devoured every new episode, and serial shift, of this deeply engrossing, decades spanning series.

My first encounter with Spock’s curiously enamouring character came after I had finished watching all the seasons of Star Trek: The Next Generation, which takes its audience almost 200 years into the future, ahead of the time of the original Kirk-led Star Trek crew. I remember watching the said episodes on Star Plus, which, at the time, only aired English language programs like the Batman and Robin series, Small Wonder, The Simpsons and the likes.

Captivated by the stellar plot, I longed to watch the original series, and correct my chronological bearings in terms of the show’s timeline. This was during the fleeting last years of the 90’s (the turn of the century), when the internet, let alone the prospect of downloading entire TV shows on cumbersome dial-up connections, was a fairly recent offering to the Pakistani social sphere. Most people, including my family, had never even seen a computer system. My first desktop was bought much later in the crazy 2000’s, which my beloved mother acquiesced to with her much hard-earned money (spent in order to appease the insufferable fancies of a longing child).

Spock, of course, was half-Vulcan, and half-human, owing to the unlikely union of two individuals hailing from different species, in a cosmopolitan universe. He had inherited his purely Vulcan father’s rational detachment, and cool logic, as well as his mother’s typical human emotions, which formed the bulk of his often disconcerting, and meddling, ‘inner world’. Externally, he appeared to be a thoroughly calm and collected Starfleet officer, whilst his inner self was often plagued by a mortifying flood of tempestuous ‘feeling’, a part of his nature he always (unsuccessfully) tried to suppress.

As the valiant crew of the USS Enterprise suffered from harrowing incidents in the course of their exciting careers aboard the indomitable starship, Spock tried to inject his characteristic brand of blatant objectivity to align his human peers’ wildly divergent, and often incoherent, human opinions. Scenes which featured Spock attempting to go about this task often proved to be very comical; particularly when his shipmates such as Kirk, Dr McCoy and Scotty became indignant with his overtly Vulcan attributes.

Spock, however, also proved to be a very loyal and self-sacrificing friend; often risking his life boldly, in order to afford protection to his space-bound compatriots. His lifelong friendship with the captain, Mr Kirk, was a legendary part of the show; and the mix of Kirk’s gallantry, and Spock’s logical entreaties, in the face of all obstacles, has always been priceless.

Spock, due to another blessing which was characteristic of his race, had been endowed with a very long life. This gift of seeming-immortality allowed him to converse with Kirk’s, and his younger self; albeit in a time-folded alternate dimension. Even there, both Spocks’ assistance proved to be invaluable in saving the lives of the Enterprise’s crew.

In my opinion, no other actor can even dare to come close to the genius Nimoy exhibited in the characters’ execution.

Like many other actors who played the part of this iconic, and universally identifiable, character, Nimoy was no stranger to the terror of script casting. Even though he worked in a variety of other roles, in many other television and film productions, he could never quite manage to shake off Spock’s unyielding persona, from any of the other characters he portrayed.

In addition to his pivotal affiliation with the Star Trek franchise, Nimoy also lent his hand to such creative endeavors are directing, writing, photography and music. On an interesting note, his written works include a very enlightening, and psychologically gruelling, two-volume autobiography titled I Am Not Spock and I Am Spock, respectively. The work sheds light on Nimoy’s anguished state with regard to the public’s fierce identification of him with Spock’s character, and features a series of imagined dialogues between the character and himself.

Nimoy also authored several anthologies of romantic poetry, and was involved in the publication of a thrilling comic book series, which, intentionally, bore no connection to his parent franchise.

Although I could ramble on and on, in this heartfelt little tribute of mine to Nimoy, I think it would suffice to say that the character of Spock will be sorely missed; in particular by us, the globally-spread members of the Star Trek fraternity.

To Nimoy’s, nay, Spock’s memory, I would like this to say:

“May ye live long, dear friend, and prosper, in eternity”.