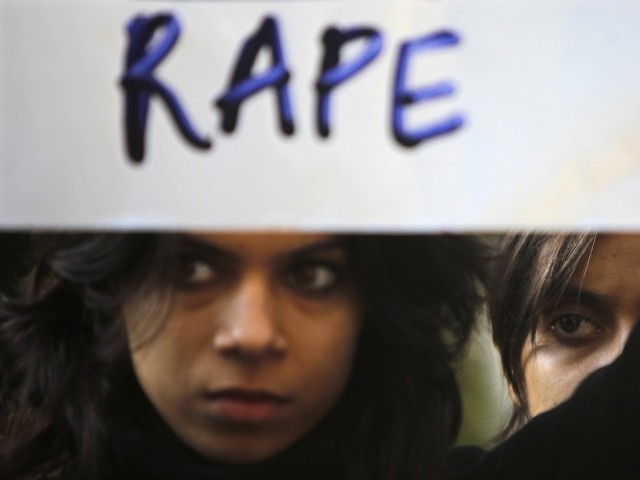 We need to treat women as equal citizens with full protection as provided under Article 25 of the sacred Constitution of the Islamic Republic of Pakistan. PHOTO: REUTERS

The plight of women in Pakistan is a grotesque reality; so shameful that even in today’s day and age most aspects of their suppressed lives are considered taboo for public debate. One such area is the crime of rape, and marital rape in particular, where the latter is still not considered an offence or a wrong-doing in this land of the pure.

The Sughra Imam Report which was recently presented before the Senate Standing Committee on Law and Justice revealed that there has been a zero conviction rate for rape in the past five years and the main reason behind this is the constitutional provision on defective investigation which requires the identity of the rape victim to be revealed.

According to the Human Rights Commission of Pakistan 2013 report, the cases of rape registered in Punjab were 2576, the highest amongst all the provinces. According to official records 127 rape and three gang rape cases were registered in KP last year and 27 cases of gang rape reported in Sindh. According to a research study by Rutgers World Population Foundation (WPF) in Dera Ghazi Khan, Muzaffargarh, Jacobabad, Kashmore, Jaffarabad, and Naseerabad districts, 66% of women interviewed said that they had experienced sexual violence, whereas 93% said that they had been subjected to marital rape.

“A sexual intercourse by a man with a woman either against her will, without her consent, or with consent but obtained by putting her in fear of death or hurt, with her consent by falsely making her to believe that she is married to him or with or without consent when she is under sixteen years of age”.

Hence this provision is inclusive of marital rape and even consummation of child marriages (of those under 16) is governed under this section but unfortunately, Pakistan still doesn’t have a law on marital rape.

Who is to be blamed for this?

It is the entire criminal justice system, from the police department, to evidentiary requirements, to lacunas in law, lack of empathy towards rape victims within the legal fraternity, silence of civil society and pre-dominantly the patriarchal set up where women are still considered as chattels.

If we look at the laws themselves, the Hudood Ordinance created a legal paradox where an accused of adultery and a rape victim were put under the same category where a rape victim had the burden of proof to show that she was raped and had to bring four male pious witnesses in the support of her case. Even greater irony is that DNA, which is considered to be conclusive evidence, is not admissible in rape cases and victims are often shunned or silenced in the name of yet another male-centred concept known as ‘honour’.

It is even worse when the rape victim is compelled to marry the perpetrator to save the family honour or a jirga order exchange of women to end the feud. An analogy can be drawn from Morocco, where a 14-year-old rape victim, Amina al Falili, as per the customary Moroccon law, was made to marry her rapist – to avoid this, she drank rat poison and committed suicide. This incident led to a movement for abolishment of the draconian legal practice. The women in Pakistan are also in a similar position when it comes to rape. Yet nothing has been done to save them.

They are either told not to bring up prosecution cases, and if they do, they face immense problems in the registration of an FIR and recording of evidence. In many instances, they are maltreated by the police officers who consider such women to be responsible one way or another for the incident, and in some, even more disconcerting, cases they are further raped by the policemen. So what kind of laws are these that shun and condemn the victims, and protect the perpetrators?

There are many legal and procedural hindrances in acknowledging marital rape as an offence. Even in western liberal societies like the UK, the offence was not legislated upon by the Parliament but created by the judiciary in the case of Regina versus R in 1991. Lord Keith quoted Hale’s proposition that by marriage, a wife gives her irrevocable consent to sexual intercourse with her husband under all circumstances and irrespective of the state of her health or how she happens to be feeling at the time and asserted that in modern times, any reasonable person must regard that conception as quite unacceptable.

The problem with creating the offence of marital rape is that the state is hesitant to break the private-public dichotomy and intervene in family life. Secondly, it is difficult to determine the absence of consent in a marital setting unless it is violent or the couple is separated. But this should not be an impediment in passing legislation on the subject. Thirdly, it is considered to be a social taboo and widely believed that if a woman consents to marriage, she cannot refuse sexual intercourse to her husband – it is his right over her, which she is obliged to fulfil.

But such reasoning is seriously flawed and illogically imprudent, as women are not properties of their husbands; they are free individuals with the freedom to make decisions and their independence must be valued. Equality lies at the heart of Islam and any such notions that put a woman in a subservient position to that of men in marriage are antithetical to the very precepts of Islam. It is a violation of human dignity and choice, and if sexual intercourse done without consent is considered rape, then why is marital rape kept out of this distinction? In fact, marital rape can be more traumatising for the woman because she has to keep living with the man who violated her and call him her husband.

Therefore, while the bill has been approved, it is the need of the hour to pass a new legislation (amendments) on anti-rape laws by including provisions of protecting the victims’ identity, bringing attention to marital rape in the clause and accepting DNA as conclusive evidence. We are aiming towards women empowerment which is included in the Vision 2025 and part of the UN Millennium Development Goals, but this empowerment is not possible in a society where they are not protected and those who violate them are not prosecuted.

Until the legislation is passed, victims will still be treated as perpetrators. In fact, on February 26, 2015, despite the bill having been approved, the video of a woman being gang raped went viral on social media. Little was done to prevent the video from being shared. While the video proved that the woman had a plausible case against the accused men, a lack of cyber-laws in Pakistan prevented the video from being taken down from these websites as well, causing more mental-trauma to a victim who was trying already desperately trying to cope with the incident, let alone the stigma attached to it.

It is a shame that as a society we do not feel the need ourselves to prevent such videos from being circulated. The fact that a law is required to beat it into our conscience says a lot about us, as a country trying to protect women, and those sharing the video.

The ideals of empowerment and emancipation cannot be achieved in a suffocating society plagued with misogyny. We need to treat women as equal citizens with full protection as provided under Article 25 of the sacred Constitution of the Islamic Republic of Pakistan.