I stand in solidarity with Patricia Arquette 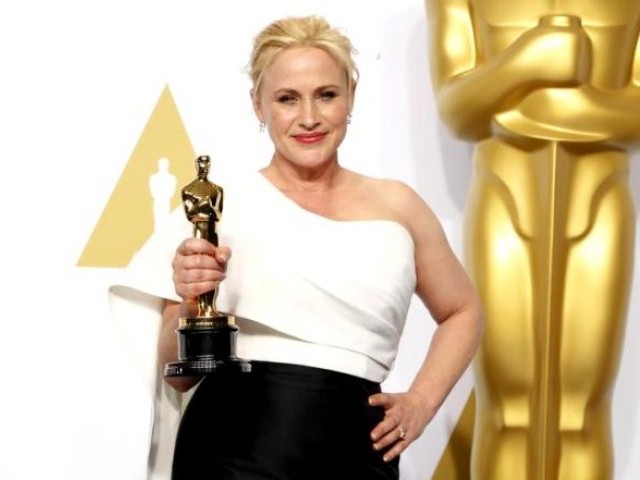 The speech that heightened the most interest and controversy was that of Patricia Arquette, who won an Oscar for her role in Boyhood. PHOTO: REUTERS

I am not a huge fan of the Oscars because nothing interesting happens during it. It’s the same old show, but recycled every year. And the only reason I’d ever watch the Oscars is because of the pretty dresses showcased by celebrities on the red carpet. I love pretty dresses.

However, this past Sunday, the Oscars took a different turn; they actually became interesting. More and more celebrities were seen talking about rights; civil rights, women rights, immigrant rights, etcetera. From John Legend’s powerful speech on the fact that there are far more black men under correctional control today than they were under slavery in 1850 to Alejandro Gonzalez’s speech which,  after Sean Penn’s blatantly racist comment against Mexican immigrants, encouraged him to acknowledge the plight of Mexican immigrants in America  and that they be treated with the same dignity and respect as that of their forefathers who helped build the nation.

Conversely, the speech that heightened the most interest and controversy was that of Patricia Arquette, who won an Oscar for her role in Boyhood. While her speech started out like any typical speech, where she thanked her Boyhood cast, crew and family, I doubt anyone was prepared for what she said after that. And I quote,

“To every woman who gave birth to every taxpayer and citizen of this nation, we have fought for everybody else’s equal rights. It’s our time to have wage equality once and for all, and equal rights for women in the United States of America.”

It would be a lie, and a huge one, if I said that these words did not sound like music to my ears. Yet, it appears that I was perhaps one of the very few who heard these words and perceived them unequivocally; a woman – regardless of if she is white, black, yellow, brown, pink, rich, poor, etcetera – sheds light on the issue of gender wage inequality and demanding that women be treated fairly and equally to their male counterparts.

For a logical person, these words would be perceived as imperative and impactful, because let’s face it, Ms Arquette was only stating the obvious; gender wage gap is indeed a huge, and undoubtedly the most difficult, problem in America regardless of race or class.

Yet, as soon as she uttered those words, many people took to social media, Twitter especially, to verbally attack her for “prioritising” the rights of white women over people of colour and LGBT individuals. They quickly pointed to an interview Ms Arquette gave in the pressroom later in which she stated,

“It’s time for women. Equal means equal. The truth is the older women get, the less money they make. The highest percentage of children living in poverty is in female-headed households. It’s inexcusable that we go around the world and we talk about equal rights for women in other countries and we don’t. One of those superior court justices said two years ago in a law speech at a university that we don’t have equal rights for women in America and we don’t because when they wrote Constitution, they didn’t intend it for women. So the truth is even though we sort of feel like we have equal rights in America right under the surface there are huge issues at play that really do affect women. It’s time for all the women in America, and all the men that love women and all the gay people and all the people of colour that we’ve all fought for to fight for us now.”

I completely understand why the above statement would be deemed offensive and thus elicit massive criticism, since it’s understood that people of colour and LGBT people have fought for and supported women and their rights for quite a long time.

At the same time, it’s unfair to pass a judgement, especially when the actress’s intentions were clearly genuine. And while the last line of her statement may have sounded like she was demanding rights for everyone, including people of colour and gay people to fight for white women’s rights, I highly doubt that was what she had intended to say. As a matter of fact, nowhere did she specifically mention that we should only fight for ‘white women’ rights. It’s true that the gender wage gap affects every single woman, regardless of their race, but she never meant it to be exclusive to white women.

It’s quite natural for someone to take offense and become vocal about something that affects them deeply and personally, whether it’s sexism, homophobia, racism, xenophobia, misogyny, etcetera. Each and every one of us has experienced things that may have terminally affected us in ways that are far beyond anyone else’s comprehension. And we all have specific priorities – regardless of race, class, sexual orientation, gender – that we are strongly willing to fight for.

No two struggles are the same and nor should they ever be compared. However, at the same time, I believe that it is unfair to attack someone just because we feel like they are either simplifying or undermining our struggles over their own. We need to stop feeling victimised each time someone we least expect makes a statement in support of us and our struggles.

How can we be sure that they too didn’t suffer from the same struggles we did?

Just because they are supposedly ‘rich’, ‘famous’ and ‘privileged’ does not mean that is how their lives have always been. And Ms Arquette is no different, for she too struggled quite a bit before she became ‘rich’ and ‘famous’; she wasn’t always as ‘privileged’, albeit being a white woman in America. Her tweets from this morning further explain what she had to endure before all the glitz and glamour:

Hence, we need to recognise that sexism, misogyny, homophobia, racism, and oppression of all sorts are varied in each and every one of us.

Where is the privilege in that?

It is true that she is in a far better position now than she ever was, and most of us will never be able to attain the popularity and wealth she has now, yet we need to realise that her life wasn’t always like this. For all of us, our lives are constantly changing, either for the better or for the worse, depending on what we do or make of it.

The term ‘privilege’ itself is too convenient and simplistic a term. We tend to use it quite heedlessly, not realising that we too are discriminating and being biased, associating the word with people or individuals simply due to our own skewed perceptions and assumptions.

Rather than attacking, bashing, and criticising Ms Arquette, we should instead salute her, support her, and stand with her in solidarity. Sure her speech wasn’t perfect and the statements she made afterwards may not have clicked well with some of us, but if we were to look at the bigger picture, the woman had good intentions and she meant well.

So how about we shift the focus away from her and focus all our time and energy on the important issues raised by her instead? Ones that are far more important.