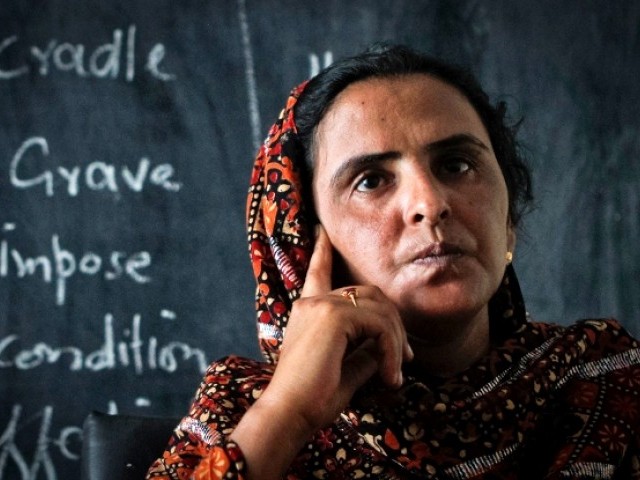 Think about all the Mukhtaran Mais and the Kainat Soomros and the many faceless, nameless, sufferers in silence who have yet to receive justice just because a simple use of biotechnology is being kept away from the public. PHOTO: REUTERS

They say we have come a long way since the 80s – the fashions, the styles, the music, the technology. It seems like society is taking a giant leap forward when it comes to development and evolution given that the past couple of decades have been the ones that earmarked rapid changes in social progress.

When it comes to women in Pakistan, however, the graph seems to be erratic and stunted at best.

The 80s brought to the women of Pakistan a terrible code of injustice vis-à-vis the Hudood Ordinance, a retrogressive set of laws that we still have in place. Not to mention the Council of Islamic Ideology (CII) that keeps insisting that DNA cannot be taken as primary evidence in rape cases, and can only be taken as corroborating evidence. CII insists that four witnesses are to be considered the primary evidence in considering rape.

The statistics continue to shock and awe Pakistanis as according to a Human Rights Watch report, rape takes place once every two hours and a gang rape every eight. One would logically assume that such a crime would instigate lawmakers and various other leaders with platforms and resources to pursue this cause relentlessly. One would logically assume that Pakistan should be working on crimes against women on a priority basis, especially since these crimes are often deep-rooted in power and are deeply institutionalised. The state becomes even more helpless in providing justice to the wronged just by virtue of no proper legal framework in place for rape victims.

On a less than grim note however, a parliamentary panel on Tuesday approved certain amendments in the anti-rape laws. This panel supported DNA profiling as crucial evidence during the investigation. Another excellent step was that the body also approved an amendment in Article 151, Order X of 1984. This bars the character assassination of victims during the trial.

The CII previously ruled against DNA evidence being admissible as primary root of investigation which could have completely negated the forensic strength of a case. With this new law in motion, not only will it be much easier to convict the perpetrator without much doubt but it will also help in fast and effective justice. For example, recently a historic rape kit was recovered in Houston that led to 850 hits in the FBI database. Think about it. Think about all the Mukhtaran Mais and the Kainat Soomros and the many faceless, nameless, sufferers in silence who have yet to receive justice just because a simple use of biotechnology is being kept away from the public.

Slut-shaming and victim-blaming is the beginning of the regressive spiral that propagates rape culture. It is extremely well-thought of to bring in legislation that bars character assassination and this, hence, places the blame on the perpetrator, where it should reside. For too long, women have witnessed and experienced rape apologia, stemming from “maybe you should have worn more conservative clothes” to “maybe you should just stay home and stay away from the world”.

While this is a positive and healthy step towards alleviating crimes against women in Pakistan, one must remember that this is a long and upward climb, and needs much more than condemnations and statements. There need to be more laws; clerics need to come up to speed with the modern day inventions without considering them a threat to their beliefs; social structure needs to be far more inclusive and accepting of rape victims or in the matter of any kind of abuse. There needs to be a collective movement in our country to stop these crimes from happening – a movement that starts with our homes and continues to the law making bodies and courts, and continues to shape events so that we, as women, feel safe, respected and equal in the state of Pakistan.

In a country like Pakistan where there are such few laws protecting women and bodies like CII have influence but refuse to put any focus on laws that govern child marriage, female genital mutilation, marital rape and child abuse – rather seem obsessed with limiting women’s capacities as house-bound objects, this law is a huge step forward. This is an excellent reflection on how there is still political will that can be seen to protect our women from abuse and harassment. It gives one hope that eventually democratic powers will prevail and the fact is that true democracy represents the needs and wants of the common man.