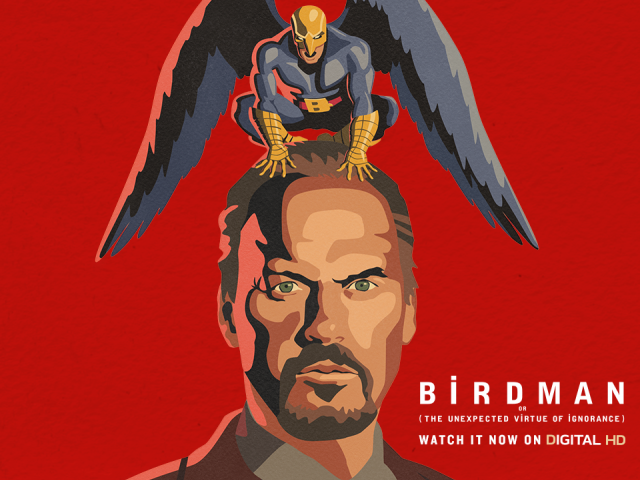 The film is very self-referential, which makes it relevant to our time. The constant references to superhero movies and social media are an indication of this. PHOTO: BIRDMAN OFFICIAL FACEBOOK PAGE

Birdman has become the latest film to join the likes of 12 Years A Slave, American Beauty and Forrest Gump by winning the Academy Award for Best Picture. While many people are still sulking over Boyhood’s loss, I for one believe the Academy got it right this time. Birdman is Alejandro Gonzalez Inarritu’s masterpiece of our time.

Bold in execution, the film is a technical showpiece that succeeds on just about every level. Birdman is a fascinating behind-the-scenes look into Hollywood, and the psyche of an actor. It’s also a satire on the film industry. While there have been many Hollywood satires – Robert Altman’s The Player is my personal favourite; Ed Wood and Barton Fink are also great lampoons – nothing quite like Birdman has ever made it to our screens before.

At the centre of it all is Michael Keaton, playing the role Riggan Thompson, a washed-up actor known to most people for playing a superhero character previously in a blockbuster movie. Now, however, he struggles to stay relevant and looks to write, direct and star in a theatre adaptation of Raymond Carver’s play, What We Talk About, When We Talk About Love?

Inarritu is known for providing us with endless downers and depressing, gritty melodramas like Amores Perros, 21 Grams, Babel, Biutiful. And then he gives us something like Birdman, which is the complete anti-thesis of his previous films. His kinetic and dynamic direction is what guides the movie. He has directed the film with such precision and energy that it boggles the mind. His willingness to take risks is truly impressive.

With endless tracking shots and close-ups, it’s directed and edited so beautifully well that it feels like it’s filmed in one long take. It’s great that the Academy decided to award Inarritu with Oscars for both writing and directing because he truly deserved them both. Emmaneul Lubezki’s wonderful cinematography gives the film its visual splendour with vivid, eye-popping imagery.

Michael Keaton’s tour-de-force comeback performance is truly the highlight of the show; this movie is to him what Pulp Fiction was to John Travolta and what The Wrestler was to Mickey Rourke. Sadly, however, he was passed over for the Oscar award, which, in my opinion, is a great injustice. Keaton’s performance is complete in every way; his portrayal of a struggling artist begging for relevance is truly wonderful to watch. What’s great is that Keaton’s character, Riggan, seems to be loosely based on himself as Keaton too was known for playing Batman in the Tim Burton movie and has since then been downgraded to smaller, supporting roles.

Edward Norton chews up the scenery in his show-stealing turn as Riggan’s cynical co-star Mike Shiner. Norton plays a character that is amazing onstage but is a constantly antagonising force behind-the-scenes. I have been a huge fan of Norton ever since I saw Fight Club and this is probably his best performance since American History X.

Emma Stone also turns up a career-best performance playing Riggan’s daughter, who has just gotten out of rehab and is swept up in between everything that is going on.

The writing too is impeccable and the screenplay written by Inarritu, Armando Bo, Nicholas Giacobone and Alexander Dinearis is brilliant as it’s filled with cracking dialogues and dark comedy. The characters are wonderfully envisioned. Antonio Sanchez’s excellent drum score beats non-stop and is the heart and soul of the film.

Birdman is a work of art, yes, but it’s also the philosophical questions it asks that makes it not only a great film but a great experience. Riggan’s arrogance forces us to confront the arrogance within ourselves. It forces us to come to terms with our own shortcomings.

The film is very self-referential, which makes it relevant to our time. The constant references to superhero movies and social media are an indication of this. The film’s dissection of actors, critics and audiences makes for some great, biting satire. The plot is somewhat ambiguous as well and makes you question abstract concepts like reality and existence, which is quite beautiful.

This movie is an intoxicating ride that grips the viewer from start to finish and I do believe that 10 years from now people will view it as a classic masterpiece of this decade.

So do yourself a favour, and go watch this phenomenal film if you haven’t seen it yet.