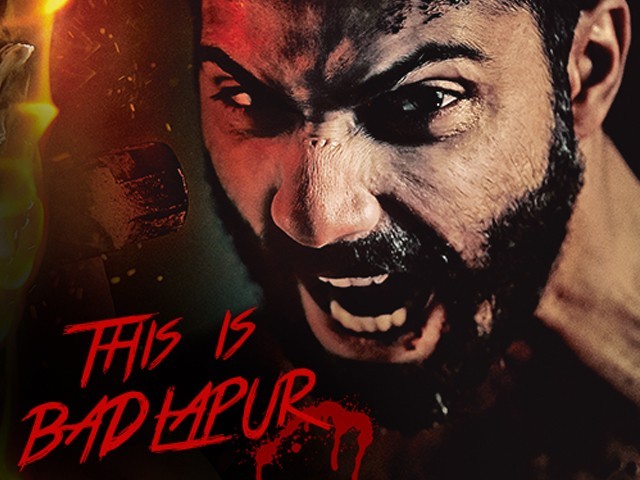 If anything, this is Varun's best performance yet.PHOTO: BADLAPUR FILM FACEBOOK PAGE

What happens when a ‘conventional chocolate boy’ opts for an unconventionally intense and complicated role, contradicting his previous comical high school performances? What makes a filmmaker choose such an actor for a main lead in his movie? How good can revenge sagas be? Well, Badlapur will answer all these questions for you.

Varun Dhawan, for the very first time, is seen in a role different from his usual ‘cutesy’ avatar. His performance has been surprising, to say the least. Along with him, we come across Nawazuddin Siddiqui, who, after Kick, has managed to score another meaty role with more screen presence this time.

At the beginning of the story, Raghav (Varun) is shown as a happily married, young, successful and urban workaholic working for a marketing agency. His life flips 180 degrees when he is informed that his wife Misha (Yami Gautam) and child were killed by a bank robber Layak (Nawaz). Layak eventually gets caught but his accomplice, Harman (Vinay Pathak), manages to flee. Layak is sentenced to 20 years in prison and it is only 15 years after the incident that Raghav finds out about Harman’s escape. Overcome by rage, Raghav vows to avenge the death of his family; how he manages to do that is what Badlapur is all about.

Performance wise, Nawaz portrays his character with panache and proves yet again that if asked to portray a powerful character, he can take on the challenge effortlessly, and that is precisely why he is one of the finest actors in the industry today. In every scene, Nawaz makes sure he stands out with dominion. Let’s just say, Badlapur would not have been the twisted rollercoaster ride it is without Nawazuddin.

Varun’s role, as a madman out for revenge, is one he has never before been seen in. His role was complicated and demanded intensity, anger, a sense of hate for almost everyone in the world, coupled with shades of being erratic behaviour and a lot more. And he managed it all beautifully!

After Dedh Ishqiya, Huma Qureshi manages to impress the audience once again. In her short-lived screen presence, she displays the most apt emotions and expressions – an emblem of a seasoned performer. The role of Jhimli, a young, sultry prostitute was portrayed brilliantly by Huma.

Vinay is, as usual, perfect, and the same goes for Divya Dutta as well. The scene in which Raghav goes for a “lunch date” with Harman and Shoba (Divya), an activist working for rehabilitation of prisoners, is a masterstroke of performances by all three performers.

A special mention of Radhika Apte – who plays the role of Koko, Harman’s wife – is essential; not only did she delicately, and realistically, portray her role, despite her screen presence amounting to hardly three or four scenes, her performance stuck to the audience like glue. She is as natural as one could be. To me, she could easily be called the Tabu of the coming days, provided she is given the ‘right’ opportunities.

Yami, as expected, gave an average performance. But the surprise came from Pratima Kazmi, playing the role of Layak’s mother, and Kumud Mishra, as a police officer, both of whom gave some great performances.

To add on to the list of strong points, the music and songs are good in general but Jeena Jeena and Jee Karda have the potential to raise crowds.

I would definitely recommend watching Badlapur and guarantee that the twisted revenge saga will keep you hooked throughout.

Based on the performances and the overall experience, I would give it an easy 3.5 out of five.