They came, they saw, they terrorised, and we are doing nothing about it 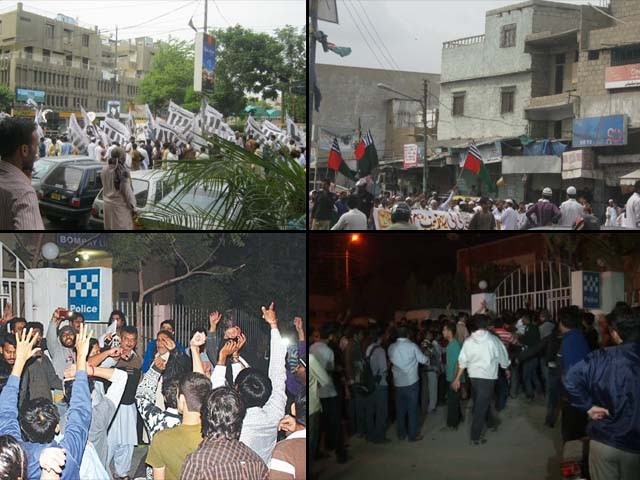 Post-Peshawar incident, the government promised us a different state; a state which won’t tolerate extremism under the banner of religiosity. But the dual standards still persist.

The screeches of the motorcycles were loud enough to announce their blustering arrival; the cadres jumped from their vehicles, blocked the PIDC Bridge and parked their wheelers in the middle of the road.

The traffic was halted; bystanders ran away from the spot, local food vendors hurriedly shut their stalls.

It was pretty much evident; a sudden panic had conquered the street, which just a minute ago was running normal. Irrespective of the diverse ethnicities present in the area, an unexplainable fear was shared by all.

This took place on February 5th, 2015, in the metropolis of Karachi.

Interestingly, the group which organised the rally was declared a banned outfit by the Sindh Government just a day before. By law, the ostensible political party does not enjoy the liberty to gather people under their official party flag, but not only did they organise the rally, they also chose to take their gathering near the CM house.

It was clearly visible that the mass gathering by the banned outfit was a show of power (read: nuisance value) to the incumbent provincial government rather than anything else. And in response, the government chose not to assert their authority after being challenged by a few hundred protestors. Sadly, the writ of the state withered.

Before the reader makes up their mind to bash the Pakistan Peoples Party (PPP)-led Sindh Government, let’s take a look at a similar, persisting case in Islamabad – the capital city, which comes under the jurisdiction of the federal government.

An FIR was launched against the Islamabad-based controversial cleric, Maulvi Abdul Aziz, on the constant appeals of the civil society, which eventually resulted in an issuance of a non-bailable arrest warrant against the cleric.

More than a month has passed and the cleric safely resides at his well-known house-cum-madrassa, a few kilometers away from the parliament. Law enforcement agencies have failed to take any action against him, regardless of the fact that he has an arrest warrant issued against his name. In the eyes of the law, he is an accused who should be arrested as soon as possible but in reality, the accused cleric lives as freely as any other law abiding citizen.

What do these two classic cases tell us?

My take on this is that irrespective of which body is governing which sector, one can take a Mickey out of the state of Pakistan and challenge its right at its capital centres by showing that they are greater than any of the stated law, provided they have a significant religious following backing them.

However, if the same tactics were to be practiced by a citizen who has no religious backing, the state would immediately take action against him. For instance, the famous Akbar Bugti case; a rebel challenged the writ of the government and the state, in response, chose to use hard power as its first and foremost option.

Putting aside the debate of whether it was constitutional or not, the question that arises is why does the same state appear powerless when it is persistently challenged by the declared banned outfit and controversial cleric?

The state is scared.

Post-Peshawar incident, the government promised us a different state; a state which will not tolerate extremism under the banner of religiosity. But the dual standards that persist because of the fear of a backlash from the far right ‘fundos’ present among our policymakers are clear indicators that the state cannot shake off its old trait. It’s too strong for a weak challenge and extremely frail against an opponent with a religious backing.

The government chose to be silent against its opponent. The media seemed too scared to talk about it. Nothing has changed, and maybe nothing will. No matter how many Peshawar like massacres we witness, the bottom line will remain that the state is yet to muster up courage to look into the eyes of their far right opponents.

It will be a sheer display of naivety to assume that the menace of terrorism will vanish as soon as military courts start their trials. It may bring perpetrators of crime to justice, but in no way can this curtail the intensity of terrorism present in the state.

It is a means to achieve an end, but not a definite end for sure. It’s a case of dichotomy; where the state today remains on its toes to tackle militancy (and it should) but at the very same time it chooses to ignore the pseudo-political faces of the militant entities – the very same groups who never fall shy to support and defend anti-state elements.

In an ideal world, the hard power rests with the state. It’s the final enforcing authority, and by all fair means it enjoys the right to enforce state order, where the requirement doesn’t revolve around frequently biting; rather it revolves around the existence of its fierce, sharp and cut throat teeth.

It’s the fear that is missing in the case of Pakistan; the state is not yet perceived as scary by her opponents.

Be scary Pakistan, be scary.

An avid reader of politics, philosophy and religion, who is also a Graduate in Politics and International Relations. He tweets as @ebadahmed