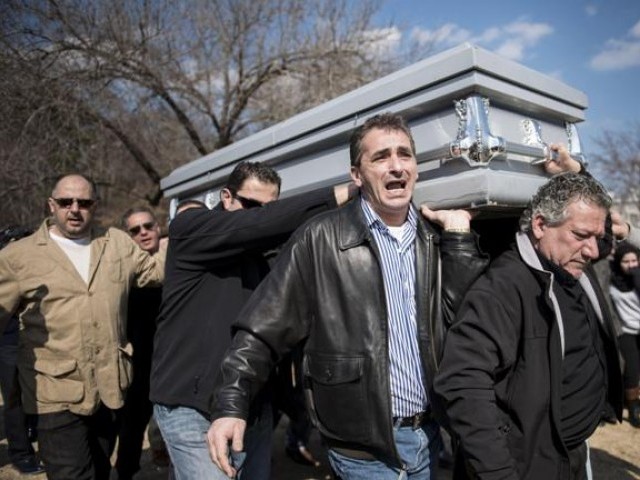 Aalia Suleman's narrative does not mesh with wide coverage that led to over 5,000 people attending the funeral of the victims. PHOTO: AFP

Almost 13 and a half years ago, 9/11 set in motion US involvement in conflicts in Iraq and Afghanistan and escalated tension between fundamentalists and the world.

Despite this, the United States, with a population of 300 million, including roughly two percent or six million Muslims, has seen relatively few domestic attacks against or by Muslims.

On February 10, at Chapel Hill, self-professed atheist Craig Stephen Hicks murdered three young Muslims, Deah Shaddy Barakat, Yusor Mohammad Abu-Salha, and Razan Mohammad Abu-Salha, may they rest in peace. This tragedy stands in infamy with Major Nidal Hasan’s Fort Hood killing spree in 2009, but in the US these cases are exceptions and not rules. We should not exaggerate the threats.

At The Express Tribune, Aalia Suleman magnifies this. She cannot find a specific anti-Muslim comment made by Hicks, so she quotes him thus,

Her narrative does not mesh with wide coverage that led to over 5,000 people attending the funeral of the victims, especially in context of Muslim convert and lone wolf Alton Nolen, who beheaded a co-worker at a factory in Oklahoma last September. Can anyone recall coverage of his victim Colleen Hufford’s funeral? May she rest in peace.

Dean Obeidallah adds to the muddle by accusing, in The Daily Beast, Richard Dawkins and Sam Harris of spewing “hateful comments about Islam”. Meanwhile, The Islamic Monthly’s Arsalan Iftikhar interprets the FBI’s definition of terrorism and how Hicks motives were:

“To intimidate or coerce a civilian population (or) influence the policy of a government.”

“Violence or the threat of violence, especially bombing, kidnapping, and assassination, carried out for political purposes.”

False equivalence leads to fruitless semantic wars over the definition of “terrorism”. By their own overtly political words the Charlie Hebdo killers, Anders Breivik, Timothy McVeigh, the Tsarnaev brothers, and Nidal Hasan committed acts of terrorism. Hicks’ motives are not Al Qaeda’s, and are still in doubt.

Why are ‘atheistphobes’, Dean Obeidallah and Arsalan Iftikhar, so concerned with the red herring of Islamophobia and the definition of ‘terror’?

Why don’t they focus more on the motives of the Charlie Hebdo murderers, Daesh, Boko Haram, or the Tehreek-e-Taliban Pakistan? As Kunwar Khuldune Shahid wrote for The Telegraph,

“Muslims can fight both anti-Muslim bigotry and Islamist terrorism by calling out the radicals.”

We need sanity, as Noman Ansari exhibits at Dawn,

“I have to ask, what difference will it make to the three innocent lives lost if their killer is declared a terrorist, considering he is already behind bars and will not spend another day as a free man?”

There should be an objective examination of Hicks’ motives. Past posts show that he supported the Ground Zero mosque,

“Anyone who calls themselves American can claim that a Mosque shouldn’t be TWO BLOCKS AWAY from what is known as ground zero,”

And he preferred Muslims to Christians,

“In fact, I’d prefer them to most Christians as I was never coerced in any way by the Muslims to follow their religion, which I cannot say about many Christians.”

Defining what type of ‘hate crime’ it was won’t offer any consolation to the families and friends of the victims. Nothing can.

Going forward, are Muslims safe in America after Chapel Hill? Yes. The lives of Muslims did, do, and always will matter. Hicks will face the maximum punishment and be universally and unequivocally condemned as evil.

Is anti-Muslim hatred a problem?

Of course, as an act of arson at a Houston Islamic Center on February 13 reminds us. And the culprits, hopefully, will also face justice. But rather than stoke paranoia, we should stay grounded in reality. Just as Muslims object to being misjudged by the acts of a few radicals, Muslims should not misjudge America or atheists.