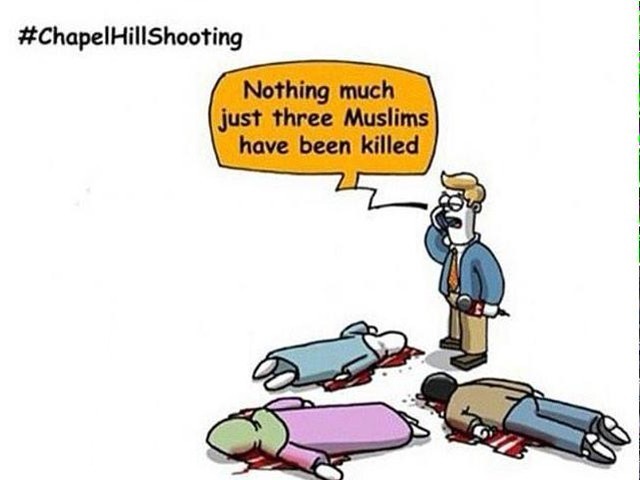 If the incident alone wasn’t enough to enrage the global community, the recent cartoons were the cherry on top of the cake. PHOTO: TWITTER

“Shoot all the blue jays you want, if you can hit ’em, but remember it’s a sin to kill a mockingbird” –  Atticus Finch, To Kill a Mockingbird.

Does it make you feel better when the tables turn?

The recent tragedy in Chapel Hill, North Carolina, where three innocent Muslims – a newlywed couple and their sister – were killed by a neighbour, Craig Hicks, is nothing short of a wakeup call. If this doesn’t already tug your heart strings, then the mere fact that they were strong pillars of the community who believed in regularly volunteering and were going to an evening prayer and a vigil later that night should. The world did not just lose great Muslims but brilliant human beings. This whole incident just goes to show that it does not make you feel better when it’s a white man behind the gun.

According to one tweet, Hicks was probably an unstable, lone and depressed gunner. If a non-Muslim killed a person, he is known to be disturbed or a patient of some mental illness, but if the roles were to be reversed, and a Muslim man shot three young white people, he is known to be suffering from “terrorist-ness”. Is that even a word? When did terrorism become a medical disease?

If that’s the case, then I am a proud Muslim who suffers from this disease. The double standards in this world bar no limits and I feel that the idiocy exhibited by our fellow human race reaches a new low every time. It just makes you more frustrated that people can still go around shooting random people on the basis of their race or religion and not be held accountable.

The media was the first platform to break the story, while families of the deceased were left to suffer in agony and the police withheld information from them for countless hours. Imagine not knowing that your child has been dead for a couple of hours and have the news and media break it to you. In this day and age, where media coverage can be a menace as well as a friend, no one can really draw the line between ethics and taking advantage of the situation.

When people woke up the next day of the attack, there was a global display of outrage and frustration as the community expected answers – but with the investigation in its initial stages, there were none. It was a hopeless situation. My family Whatsapp group sent out mass texts to all my cousins living in different parts of the United States, and while everyone expressed grief, my cousin, close friends with one of the victims, was completely distraught. He had been living with the victim ever since he moved to Raleigh, North Carolina. He was speechless, and rightly so; he grew up with him and now he couldn’t decide what to make his top priority, his security or the reason behind his best friend’s death.

According to reports, the victims’ families believe that this was an act of hate crime but the shooter’s wife had the audacity to state that killing three young Muslim people was not a hate crime but “an on-going neighbouring dispute over parking”.

I live in the barbarous country of Pakistan, and yes, parking for us gets rough many a time, but I don’t go packing just so that I get a parking spot. Also, the father of one of the victims stated that Hicks had “picked on” his daughter and her husband “a couple times before”, which made them highly uncomfortable but they did not, for a second, think that it would reach this far.

Hicks’s wife response to this was:

Hicks wifes lawyer said that the three victims were "at the wrong place at the wrong time". They were in their home. THEIR. HOME #Chapelhill

Of course, to every story there will always be a backlash and, yes, we aren’t the most liked race on the block these days. But that does not mean that a whole race becomes responsible for actions of a few. If you end up reading some of the tweets, you won’t feel angry, you will feel sorry because they live in such ignominy that it’s hard for them to come out of it.

At the heart of all this Twitter mess, CNN was the first to receive backlash over their tweet which stated:

3 Muslim students shot to death in Chapel Hill, NC. Did their faith play a role in the killing? http://t.co/RnyNmuquTT #ChapelHillShooting

What does one’s faith have to do with anything? Will I now be judged for my college applications according to my faith, or when I apply for a driving learner’s permit? Weren’t we going to make an effort to cohesively piece the whole world together instead of tearing it all apart depending on our faith?

The western media did their best to hide this incident, which was hypocritical, keeping in mind that the media had reported the Charlie Hebdo incident for days and Je Suis Charlie had become the modus operandi for people everywhere. However, when the same thing took place in Chapel Hill, it became a matter of faith and a question of the attacker’s state of mind.

US media covered shooting *BY* Muslims in FRANCE constantly FOR DAYS! No remotely comp coverage for shooting *OF* Muslims right here @ home.

If the incident alone wasn’t enough to enrage the global community, the recent cartoons became the cherry on top. I just looked at one and I swore so loud that I think my maid got scared. This is the main reason why people are taking matters in to their own hands. I am all for free speech but where do you draw the line? Would I want any of my Muslim brethren to look at this offensive cartoon just after we lost three of our own? Our fight was never Muslims versus everyone else; ours has always been humans versus everyone else. It’s just sad that we’ve all been roped together because of the propaganda of a few.

"If her killer had a beard & cried Allahu Akbar, the whole world would already know this picture" #ChapelHillShooting pic.twitter.com/O6GnVzx29y

Please update your dictionaries: from now on, the term "Islamaphobia" will be referred to as "a parking dispute".

Alas, criminal individual killers exist. But there's only 1 ideology now that preaches the legal killing of dissenters. And it isn't atheism

CBS news used the murder of 3 Muslims in NC to segue into a bit on… tips to find parking spaces. https://t.co/v1LwGGJfBg

I plan on leaving in six months to go for my master’s to the US, and if someone had asked me how I feel about it a couple of days ago, I would have probably told them that I cannot wait to go. But now, I’m not so sure. Who will protect me? What if I get shot over a parking spot outside Target? Will they even tell my parents or blast it on the news? Or will they somehow make it my fault?

It’s really scary when you realise how rapidly times are changing, and how you no longer become friends over the basic interests you share but over the race you are born with.

As sad as it seems, this is our new found reality and as soon as I and everyone out there accepts it, we might live a little more cautiously and not get shot at the next corner.

I was ecstatic about going to the US for fulfilling my dream. But now, I am seriously reconsidering it. It is no longer the land of the free.