Paint the town green and feel the jazba! This is our World Cup 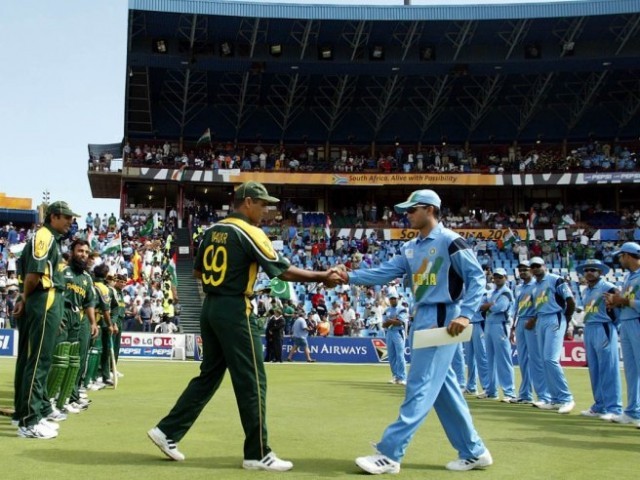 It is a match for the irrational, those bitten with the bug of insanity, ravaged by their all-consuming need for victory. There is nothing quite like it. No game this emotionally invested. No rivalry this heated. For nine hours of your life, time stops, blood pressures rise, friendships are formed and broken, and everyone from a six-year-old to an 80-year-old is an all-knowing cricket pundit.

This is Pakistan versus India; this is ODI gold.

Tomorrow, February 15, 2015, Pakistan and India will face each other in the opening match of their World Cup campaign. India is currently ranked second whereas Pakistan seventh on the table, and yet, the game is expected to be a close one. Between the ad campaigns mocking our five consecutive World Cup losses against our arch rivals and social media blowing up with memes and statuses, the jazba we were all searching for has finally been found.

There is something different about the air on the day of a Pakistan-India match. Those who never watch a game are suddenly adorned in their green jerseys. Homes are turned into mini stadiums. The entire nation is staunchly religious, pleading for a higher power to intervene. We find ourselves abusing, praising, placing bets and selling our soul for a wicket. When the national anthems play, it is war; it is a matter of pride. It is the desperation we seek in 11 players to heal a wounded nation, to bring the kind of joy only cricket can. History books ring in our ears, we’re back in pre-partition days, and we all quite dramatically bleed green.

In the history of head to head matches between Pakistan and India, Pakistan has won 72 matches, whereas India has only won 50. In 2011, Pakistan lost the World Cup semi-final to India at Mohali and the nation still throws daggers at Misbahul Haq. This time, Pakistan has no Saeed Ajmal, Mohammad Hafeez, Umar Gul or Junaid Khan to depend on. This time, however, India has no home conditions to seek help from either. These are foreign conditions, and India, specifically in the last few years, has struggled to win anything on these pitches. If there were any year Pakistan could break the dreaded curse, this would be it.

Pakistan by no means has a perfect playing XI. Some of the decisions made by the Pakistan Cricket Board (PCB) selection committee have been outrageous and have caused quite a stir. Ajmal, being the number one ODI bowler in the world, is cleared and not accounted for in the squad, which is a sore spot and heated topic of debate. But what does it matter? Twitter is already awry with predictions of Mohammad Irfan taking Virat Kohli’s wicket. My lunchroom at work has become a mini gambling ring about who will win the toss, whether Shahid Afridi will score and what happens if Pakistan is made to chase beyond 240.

In the absolute chaos that it is to be a Pakistani, cricket fits right into the equation. In the past 67 years, we have yet to separate the sport from who we are inherently as a nation. Either we are winning the World Cup, or we are being absolutely decimated. Much like the country, our cricket team mirrors extremes.

It has been four years. This is the biggest stage of them all. It is time to paint the town green and light up those fireworks. This is the year Pakistan breaks the one painful record India holds against us.