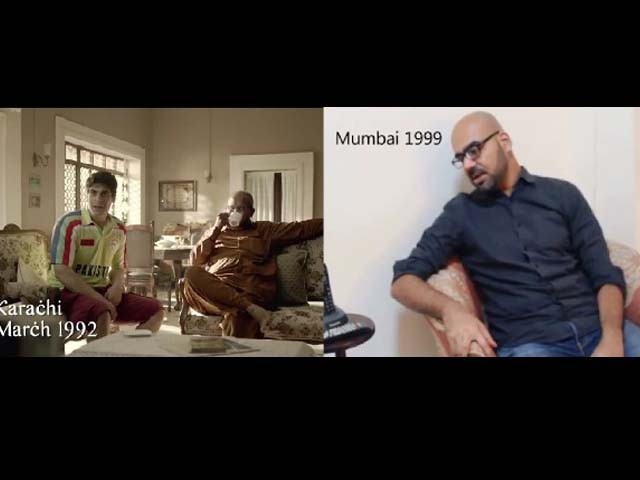 It has already garnered half a million consolidated hits; been shared by all the major pages and private news agencies on their social media. Why? Because someone tried something. PHOTO: JUNAID AKRAM

Just like my life, this blog might not have a particular sense of direction. There is a lot boiling up in my head and I will try to intersect all my rants.

First of all people, calm down. Seriously.

Learn to take a joke. If you cannot, shut up and move on. If you think that this world would be nicer to you forever and ever, then you’re living in a delusion. Get out of it. It’s an evil place and internet is the womb of all evils. Whenever there is something out, an article, a video, a cartoon, we all rile up asking to ban it.

Ban this – ban that!

Because it’s easier. You do realise this is exactly the same mentality that the Taliban have. Whatever they don’t like, they ask us to stop doing it and if we don’t, they bomb us. Learn to coexist. There are a billion things in the world that you don’t like already but somehow you ignore it and live with it. Like traffic lights. You hate it, so you ignore the red light and move on.

Recently, Star Sports launched this brilliant commercial mocking Pakistan’s consecutive losses against India in the World Cup. As a humourist, I thoroughly enjoyed the genius work mostly because it was based on facts, was well-timed and well-executed (call me a RAW agent now). If you’re at all educated and a bit analytical, you choose facts over anything. Clearly, as a Pakistani it did punch the core of my heart but having said that, whatever displayed in that commercial wasn’t untrue and it was cleverly executed.

But as soon as it began gaining momentum over social media, I saw this consistent demand made by Pakistani people saying “TAKE THIS DOWN”, “BAN THIS VIDEO” and what not. It wasn’t so surprising to see a typical Pakistani reaction since that’s all we do on the internet – or outside of it. Whatever we don’t agree with, we just demand to ban it. You have the choice not to watch it. I still remember when that Egyptian filmmaker released the movie Innocence of Muslims on YouTube; I had heard and read about it. I knew where to find it. It wasn’t blocked by then. I didn’t watch it. I ignored it and moved on.

But in Pakistan, some of us burnt tires, vehicles, forcefully closed the markets, even killed our own people and got YouTube banned by the government, which now dates to roughly three years. The ban is imposed by the government, and now almost everyone is using proxies to bypass, which by definition is a crime.

We love the Prophet (pbuh) but videos of cats are also cool. The best thing would have been to make a counter video on the life of the Prophet (pbuh), and use the existence of 1.5 billion people to propagate that message.

Killing is much easier.

Pretty much the same happened with the Charlie Hebdo conundrum.

If you don’t have a response, the key is to stay quiet. The more you yell, the more they’ll tease you. Something my mom taught me when I was four, when my elder siblings would tease me. I carried the lesson with me but most forgot.

So when I came across those comments demanding Star Sports to take that advert down, I thought to myself,

“Well, they clearly don’t appreciate smart work, no wonder they like our ridiculous Tarang adverts.”

I wasn’t expecting our TV channels to make a counter advert because f*&% thinking process, they’re busy building sets so another celebrity can get re-married on a morning show. I decided to take things into my own hands and made a response video. It took me 20 minutes to write it, 30 minutes to shoot and an hour and a quarter to edit and upload. Just that simple.

The next morning, it was everywhere. Not because it was smart or funny. But it was a response – something other than the consistent moaning and groaning,

“I am offended. Take this video down, admin.”

My video wasn’t funny to my own standards, it was factually wrong because the subject was “World Cup” whereas I focused on the Pakistani wins outside of it, it was poorly written and cheaply produced because I don’t have the right equipment or expertise to execute it, yet I did what I could within the parameters of my expertise; and on its third day, it has already garnered half a million consolidated hits; been shared by all the major pages and private news agencies on their social media.

Why? Because someone tried something.

If you make fun of me, I’ll make fun of you; no matter how silly I may sound, I will try. I won’t sit in the corner and cry like a b*&^%. You do realise I’m the fall guy. If Pakistan loses this match, I will be the laughing stock for a nation of 1.5 billion Indian people. I’ll be the new subject of internet bullying. I’ll be the new Justin Bieber for a while. But I’m ready to take that fall because my fellow Pakistanis laughed and that’s what matters most to me. Nothing offends me. Just because I’m follically-challenged, people call me “ganja”, as if it’s something demeaning or it would hurt me. My Instagram handle is “ganjiswag”. You can’t hurt me. Besides, if someone’s opinion of you is so low, the only way is up.

Now the real question is what are our ad agencies doing?

Do you realise how much budget these agencies have and how much these multinational companies pay them to make adverts? And these agencies hire top university grads with solid credentials under their belts and yet we get sh*t content on TV. To some extent, I will give them the benefit of doubt that sometimes clients are difficult too but it’s your job to teach the clients that the methods have changed and they should come out of their bubble of cliché.

Here are some questions for the ad agencies:

For how long will you have Talat Hussain and Zia Mohyeddin do the voice-overs in “karak” Urdu which a great chunk of our population can’t even decipher? They’re in their 70s. Give them a break.

How long will you keep making Saima dance to chai commercials?

For how long will Faisal Qureshi be knocking doors of lonely housewives to clean up their toilets?

How long will these bahus (daughters-in-law) be seeking approval and win the hearts of their susars (fathers-in-law) as they bite onto reshmi kebab made with some heart attack-worthy cooking oil?

And most importantly, for how long will our (dandruff-free) cricketers find their vehicles giving up in an abandoned area and with them ending up playing cricket with the kids and get defeated?

I’ve been watching this since Nixon was in office. Maybe that’s why our team doesn’t usually perform because they end up playing with kids more often than we have them play with the adults. For f*&^’s sake, come up with something new. Vital Signs did the exact same commercial 25 years ago with the same brand where they ended up having a concert on the road. Pepsi hasn’t moved on. That’s why I prefer Coke.

I want all the readers to sit back, think and tell me one commercial, except Ufone ones (although they are sickly monotonous but they cater to a huge audience), that you think was really smart or witty enough in the past decade which you still remember to this day? I can’t think of anything. There’s zero thinking process among our ad agencies. There’s serious scarcity of wit and humour in our commercials.

“A nation’s intellect is measured by the quality of the advertisements they make.”

Okay, I totally made that up but it sounded convincing enough. In all seriousness, we need good content. If you can’t think of anything witty, hire a comedian! HIRE ME!

Meera versus Imran Khan? Of course, I'll vote for Meera!